Massacre victims to get compensation

Their Majesties the King and Queen have expressed condolences and extended their moral support to the families of victims in the shooting rampage in Nakhon Ratchasima, says Prime Minister Prayut Chan-o-cha.

Speaking on TV Pool on Monday, Gen Prayut said Their Majesties also sponsored the funeral rites of the victims, and had representatives -- including priviy councillors -- visit their families.

Their Majesties also asked the government to provide assistance to the victims as quickly as possible, the prime minister said.

According to the Facebook page of the secretariat of His Holiness the Supreme Patriarch, His Holiness has also given items worth 10,000 baht to help the victims' families.

Government spokeswoman Narumon Pinyosinwat earlier said the government has ordered state agencies to look into the victims' rights to compensation under various laws and regulations and report back on Tuesday.

"The ministries of Justice, Labour, and Social Development and Human Security have already done so," she said.

"The government is profoundly saddened by the mass shooting and would like to extend its moral support to all Thais and the people of Korat."

As a mark of respect and solidarity, cabinet ministers and other government officials were asked by the cabinet secretariat and the Prime Minister's Office on Monday to dress in black.

Condolence messages came from many foreign embassies, while the Pakistan government issued a letter of condolences and sympathies.

"Our thoughts and prayers go out to the innocent victims of the tragedy. We convey our deepest condolences and sympathies to the bereaved families and our support for the people and Government of Thailand," it said.

Anek Laothamatas, vice-president of Rangsit University, on Monday suggested all Thais share the grief of the victims' families by flying the national flag at half-mast on Tuesday.

He also suggested parliament observe three minutes' silence as a mark of respect to those killed.

Meanwhile, state agencies and the private sector have begun to offer their assistance to victims' families.

Poomsak Aranyakasemsuk, the director-general of the Comptroller-General's Department, said the agency is contacting victims' relatives so they can receive the compensation they are entitled to.

The Labour Ministry has also sent officials to Nakhon Ratchasima to see that compensation from the Social Security Fund is paid to victims quickly.

Advanced Info Service (AIS) has given 1 million baht to victims through the provincial governor and offered scholarships to support the education of the deceased victims' children up to bachelor degree level.

The Krungthai and Government Savings Banks have written off debts owed by soldiers and police officers who were killed during the tragedy, and gave 200,000 and 100,000 baht respectively to each of the dead victims' families.

These banks, along with the Government Housing Bank, also offered to apply 0.01% interest rates for debts owed by other victims, with conditions. 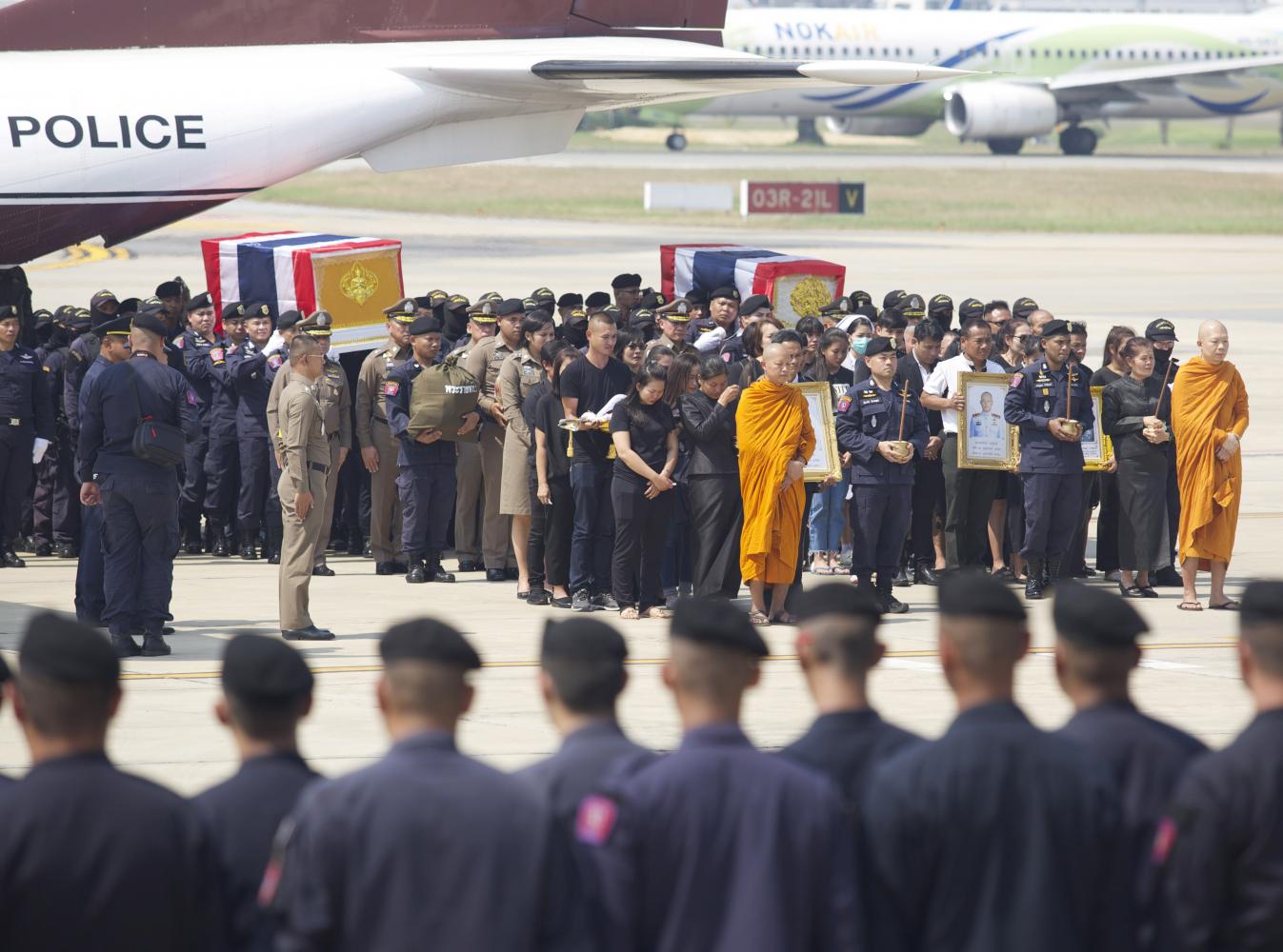 Meanwhile, the bodies of two anti-terrorism policemen killed in the rampage arrived in Bangkok for royally sponsored bathing ceremonies on Monday.

The bodies of Pol Capt Trakul Tha-asa and Pol Snr Sgt Maj Petcharat Kamchadpai, both 35, were flown from Wing 1 in Nakhon Ratchasima to Wing 6 in Bangkok's Don Muang district. Their coffins were covered with national flags, and senior officers and guards were present to meet them.

The coffins were taken to Wat Tri Thotsathep in Phra Nakhon district for a royally sponsored bathing ceremony, after which their bodies would be taken to their respective hometowns for their funerals.