School’s out: A health official disinfects Phraharuthai Donmuang school in Don muang district after an eight-year-old pupil there tested positive for Covid-19. the school has been closed for 14 days. (Photo by Nutthawat wicheanbut)

The Public Health Ministry is warning people against withholding information to public health officials and suggesting state agencies and companies issue an advisory and/or a temporary ban on visits to Covid-19 affected countries, as it steps up efforts to contain the spread of the virus.

The move comes after three members of a family who travelled to Hokkaido, Japan tested positive for the novel coronavirus, bringing the country's total number of confirmed cases to 40. It also followed a decision by national committee on communicable diseases early this week to label Covid-19 as a "dangerous, communicable disease".

Following Covid-19's status upgrade, officials now have the authority under the Communicable Disease Act to take necessary precautions to halt the transmission of the virus.

Anyone with symptoms after visiting a high-risk country are required to report to authorities, and those who fail to comply with orders face fines and/or imprisonment.

The announcement, signed by the Public Health Minister Anutin Charnvirakul, will take effect one day after it is published in Royal Gazette. It is expected to come into effect by the end of the week.

At the ministry's daily Covid-19 briefing on Wednesday, Health Minister Anutin -- who is also a deputy prime minister -- urged the public not to withhold any information which may help the government contain the Covid-19 outbreak.

Mr Anutin made the comments after a 65-year-old man, his wife and their eight-year-old grandson tested positive following a trip to Japan, bringing the country's total number of confirmed cases to 40.

"Just because of this case alone, about a hundred people will have to be tested," he said. The man developed a fever and sought medical attention at a private hospital on Feb 23 -- four days after returning from holiday.

The patient did not disclose his travel history until the next day, when he tested positive for the virus. His 62-year-old wife also tested positive, along with their eight-year-old grandson, who had been in close contact with the couple since their return.

About 30 medical personnel at the hospital came in contact with the patient, although they all tested negative for the virus and are in self-quarantine at home. 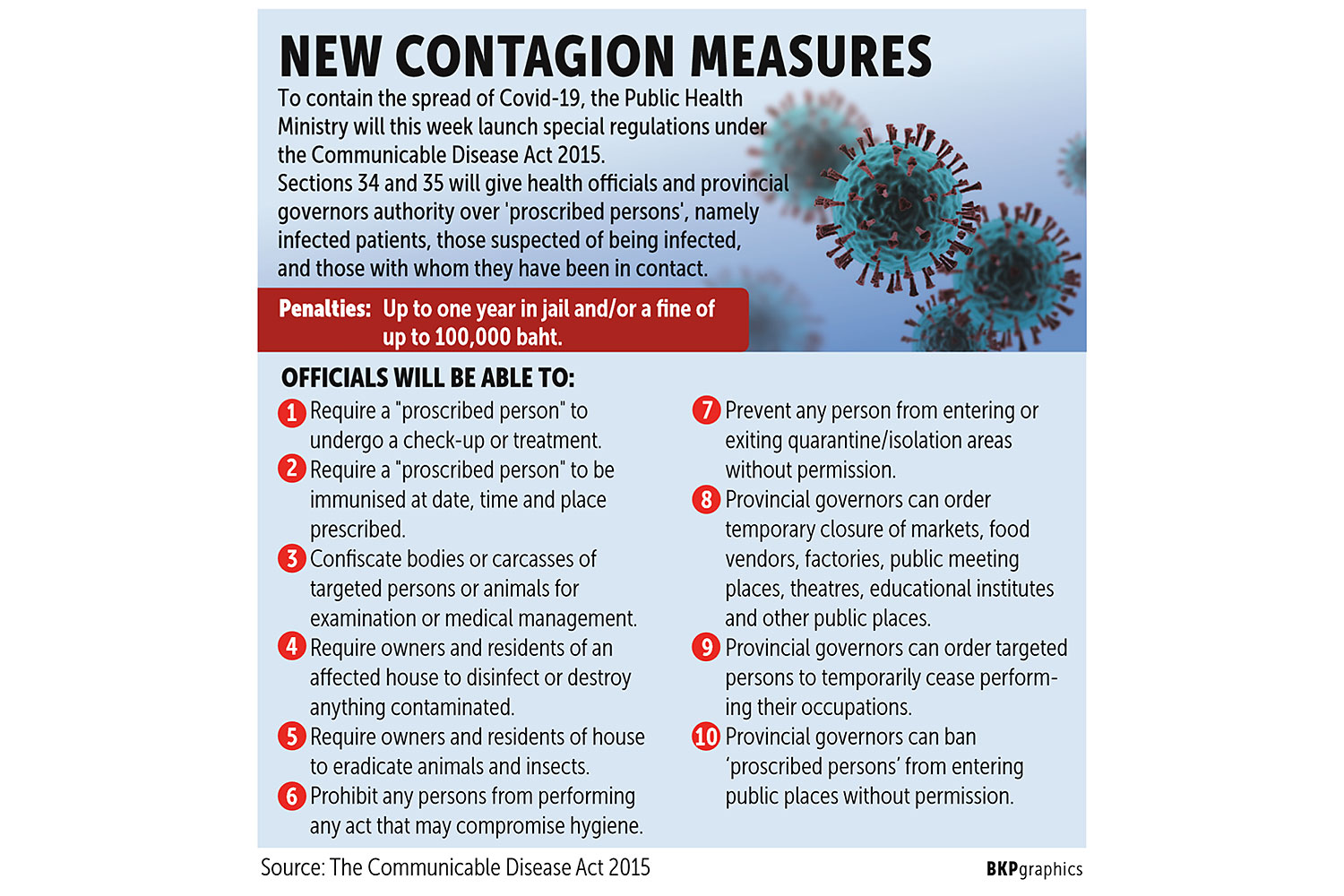 Passengers and cabin crew on their inbound flight were all being screened for the virus.

Classes at Phraharuthai Donmuang School in Bangkok's Don Muang district -- where the couple's grandson goes to school -- have also been suspended for 14 days.

A total of 41 people -- 30 classmates and 11 teachers -- were asked to self-quarantine for 14 days, while about 100 others who came into contact with the boy were asked to avoid public places. When asked if the patient would face legal action, the minister said authorities would get to that later.

Mr Anutin also advised the postponement or cancellation of trips to affected countries until the situation returns to normal, saying it is essential to help control the number of infections in the country.

He also urged airlines and tour companies not to slash prices to lure customers to travel abroad, saying domestic travel should be promoted instead to help boost the local tourism industry, which has also been hit hard by the outbreak.