People queue up at the Medical Department to receive free face masks provided by the Public Health Ministry in response to shortages and masks being sold at high prices. Each person was given one pack of three masks. (Photo by Apichit JInakul)

Prime Minister Prayut Chan-o-cha will call an urgent meeting on Wednesday to discuss what to do about 10,000 illegal Thai workers he believes may try to return home from South Korea to escape the Covid-19 epidemic there.

The move came after the Ministry of Public Health on Monday expressed serious concerns about how to handle droves of so-called phi noi (little ghosts) from South Korea after 138 Thais who were airlifted from Wuhan in China last month had to spend two weeks in quarantine in Sattahip.

It remains to be seen how many will be allowed to return home, Gen Prayut said, adding that South Korea will quarantine the workers for 14 days before letting them return to Thailand, and when they arrive in Thailand, they can expect another 14 days of likely self-quarantine.

The Foreign Affairs Ministry said the South Korea Immigration Office passed on information that more than 5,000 Thais reported to the office from December last year to March 1 wishing to return home.

"The problem is how to control such a large number of people if all of them are to be quarantined. The government must find proper measures. I realise that the people are not confident and scared ... But public health officials and medical personnel are well-prepared," the prime minister said.

Transport Minister Saksayam Chidchob said on Tuesday the ministry will propose an action plan to handle Thai workers returning from the South Korean city of Daegu to the meeting.

Although the prime minister said there are 10,000 phi noi in South Korea, some estimates put the number much higher at 140,000.

Under the plan, a special zone will be arranged at Suvarnabhumi airport to screen the Thai returnees. Those displaying any symptoms will be sent to hospital immediately while those with no signs of the virus will be asked to quarantine themselves at home for 14 days, Mr Saksayam said.

He went on to say that he has instructed the Land Transport Department and the Transport Co to provide free buses to take asymptomatic workers home.

"The reason why we will not be able to quarantine Thai passengers [from South Korea] in a specific area, similar to the process for the Wuhan returnees is that the number is very much larger. We have no space to accommodate them," Mr Saksayam said.

He also said that the Transport Ministry will ask national carrier Thai Airways International and private airlines to consider whether it is possible for them to send aircraft to fly Thais in Daegu back home free of charge.

Earlier in the morning on Tuesday, Public Health Minister Anutin Charnvirakul briefly showed an announcement signed by him on his Facebook page with a message that all visitors from nine countries and two territories as high-risk zones will be required to quarantine themselves for 14 days with no exceptions.

However, the post was deleted minutes later without explanation. The ministry later claimed the measures would be clarified in a further announcement. As of press time no new information about these measures had been posted on the ministry's website. 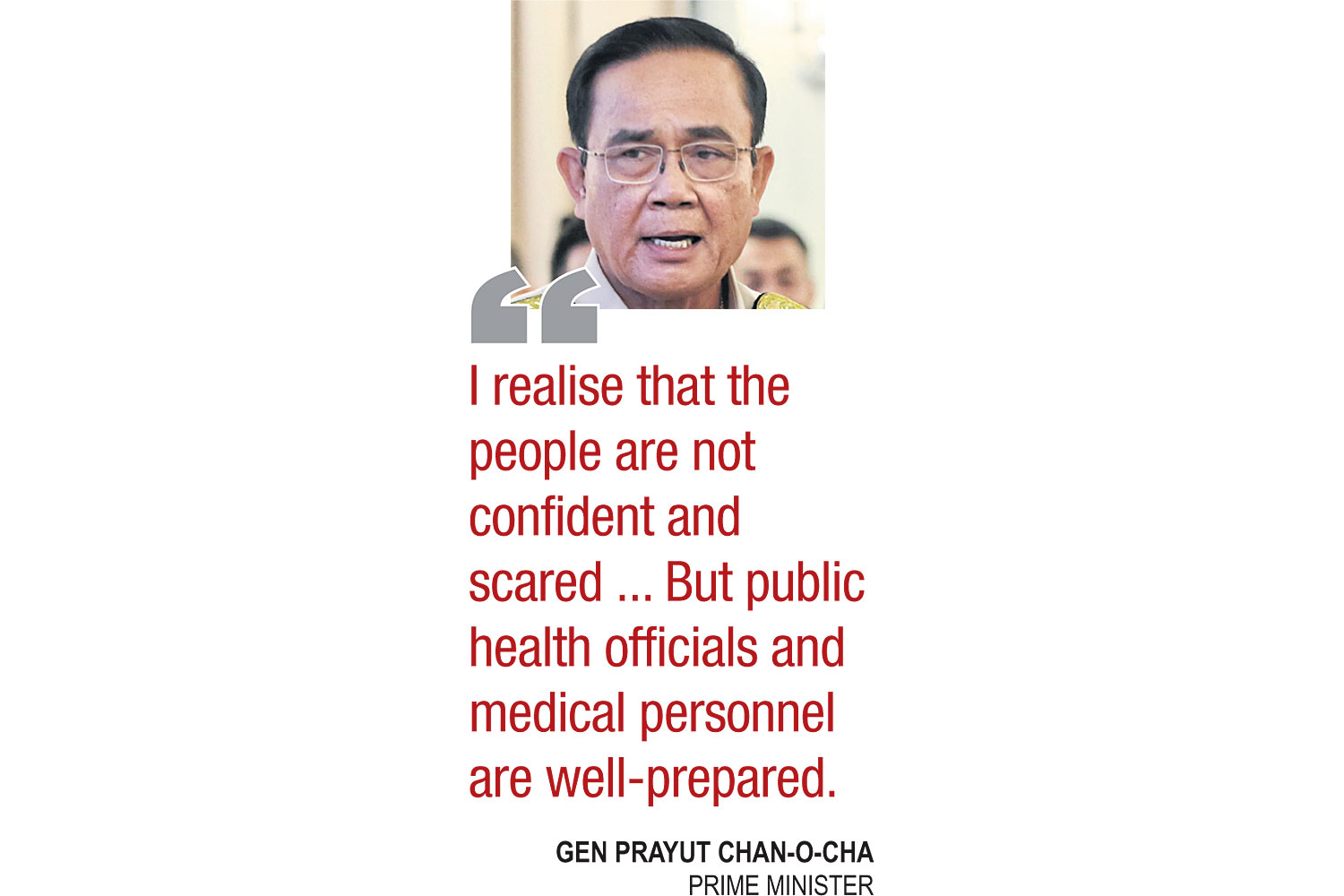 In a related development, Deputy Prime Minister Prawit Wongsuwon told reporters earlier there was no law in effect currently that can force anyone to isolate themselves.

Suchart Pornchaiwisetkul, director-general of the Department of Employment, said that Thai workers who return from countries hit by the Covid-19 are required to observe a 14-day self-quarantine.

He also said that South Korea has granted a reprieve to illegal workers who want to return home voluntarily, and they have to report to South Korean authorities by June 30.

Under the reprieve, South Korean authorities will not forward the names of these illegal workers to their governments to give them an opportunity to return to South Korea as legal workers, Mr Suchart said,

Public health volunteers working under the Ministry of Public Health will be asked to keep track of illegal workers who return from the world's second-worst Covid-19-hit country to make sure that their health statuses are all recorded accurately, according to Mr Suchart.

Dr Opart Karnkawinpong, chief of the Department of Medical Sciences who on Tuesday chaired the ministry's daily press conference, said that the ministry will ask public health volunteers countrywide to support the ministry's efforts to monitor those workers and make sure they adhere to the 14-day self-quarantine.

"We have one million public health volunteers who will play a key role in monitoring those suspected of having the virus at the local level. They can directly visit patients at home with useful suggestions.

"What we need now is the names of those workers so we can go and ring the bell at their homes."