People gather at the Phu Nam Ron crossing in Kanchanaburi, which was kept open until Saturday evening to allow stranded people to cross. (Photo by Piyarach Chongcharoen)

KANCHANABURI: Provincial authorities have allowed people left stranded in areas along the Thailand-Myanmar border to cross until 6.30pm Saturday after key checkpoints were closed to contain the coronavirus outbreak.

Trucks carrying seafood were also being allowed to cross until Saturday evening in a move made to accommodate Thais, tourists and Myanmar residents caught off-guard by the sudden order.

The decision was made after a team led by Kanchanaburi governor Jirakiart Phumsawat inspected conditions after the closure of the Phu Nam Ron border pass in Muang district.

The Interior Ministry on Friday ordered most border provinces to leave only one international checkpoint open as the country tries to block arrivals to contain the viral outbreak that has caused a sharp jump in cases this week.

Key checkpoints affected include the first Thai-Myanmar Friendship Bridge in Tak, which will be closed until further notice. The Phu Nam Ron and Three Pagodas passes linking Kanchanaburi and Myanmar will be shut until April 3.

On the eastern front, Ban Khao Din in Sa Kaeo, opposite Cambodia, will be closed from Monday to April 5. In the Northeast, Mukdahan province has suspended ferry service across the Mekong River to Savannakhet province in Laos until April 20.

Mr Jirakiart on Saturday met immigration officers, troops and business operators at Phu Nam Ron pass and was told that around 200 Thais and tourists who had crossed over to Dawei in Myanmar were stranded there. Another 200 Myanmar residents were also trapped on Thai soil after the closure of Phu Nam Ron.

To solve the problem, authorities decided to keep the border open until 6.30pm.

Mr Jirakiart said the aim was to ease the problems of people who were left stranded. As well, the final shipments of perishable goods would be allowed to minimise the impact on operators.

Kanchanaburi has reported one Covid-19 patient, who is being treated in a local hospital. Health officials are monitoring people who were in contact with the patient but no new infections have been reported so far, said the governor.

At the Singkhorn checkpoint in Prachuap Khiri Khan, meanwhile, workers raced against time to transport seafood from Myeik in Myanmar before the checkpoint closed on Saturday evening.

Many refrigerated trucks and pickup trucks were parked at the checkpoint to transport seafood, mostly squid, clams and crabs.

At least 60 tonnes of seafood were expected to be transported before the checkpoint closed at 6.30pm on Saturday. It was destined for the Mahachai market in Samut Sakhon province near Bangkok. 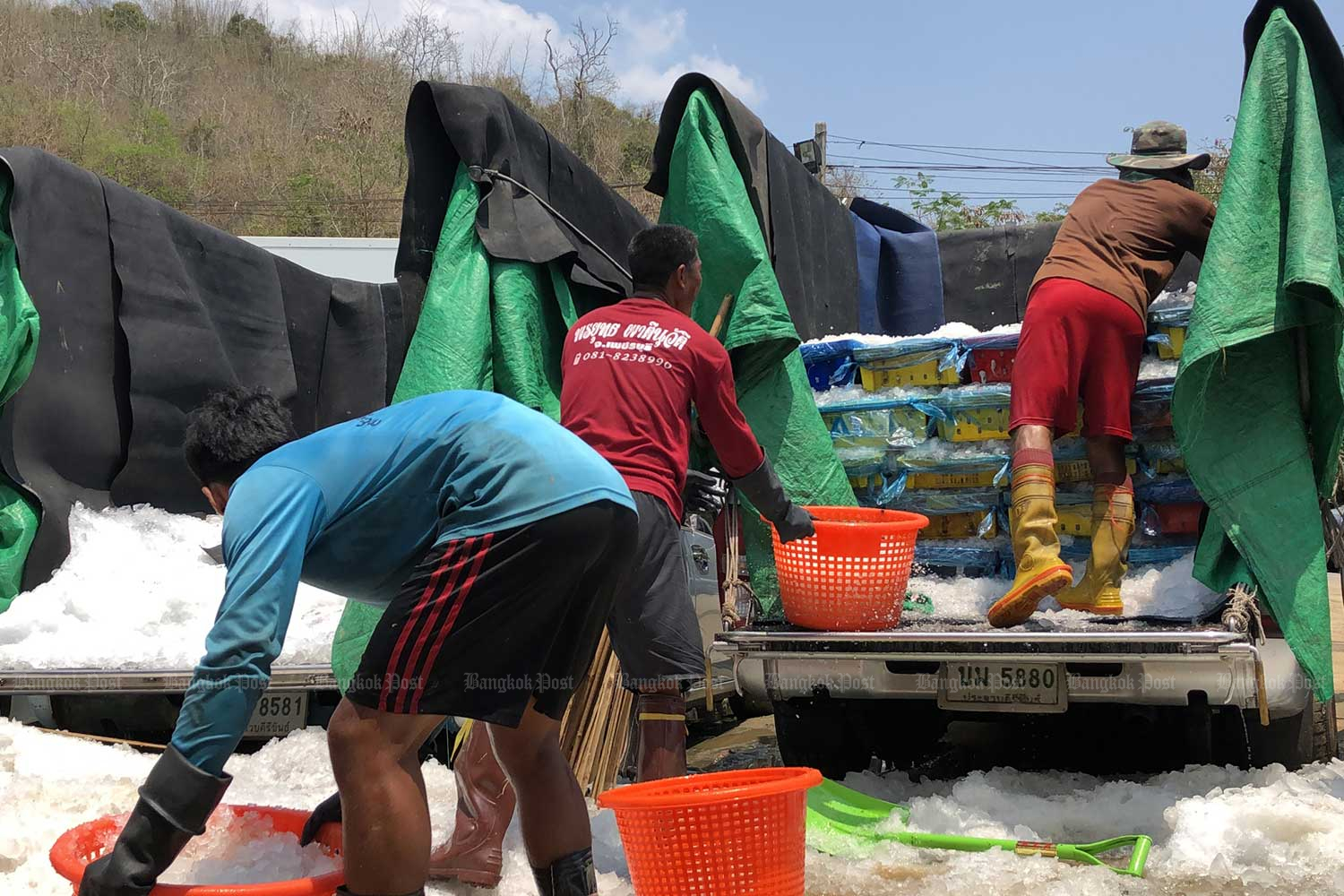 Workers load seafood into pickup trucks and refrigerated trucks before the Singkhorn border checkpoint is shut down at 6.30pm on Saturday in Prachuap Khiri Khan. (Photo by Chaiwat Satyaem)