The majority of the new infections are connected to a previous cluster of cases from Lumpini boxing stadium, ministry spokesman Taweesin Wisanuyothin told a news conference.

Seven are in serious condition, he said, while one has already recovered.

"Most of the new cases were found in Bangkok and were among young people who continue to have social activities, which can lead to more infections," Dr Taweesin said, urging the public to stay home.

The ministry said the male patient discharged from Bamrasnaradura Infectious Diseases Institute was a 36-year-old Singaporean, while seven patients in serious condition are being treated at the institute, Siriraj, Chulalongkorn Memorial, Phetchabun and private hospitals.

Many of the 15 new cases reported on Sunday returned to the country after hanging out in pubs in Poipet, just across the Cambodian border from Sa Kaew province, it added.

The ministry urged people who worked in places ordered closed in Bangkok not to return to their home provinces as they could spread the virus to their family members at home, exacerbating the outbreak.

All provincial governors have been ordered to closely monitor people who return to their villages from the capital.

"The rapid increase in the number of new patients could result in many deciding to return to their home provinces," the ministry said.

The ministry also sent an urgent letter informing chiefs of all airports, the Land Transport Department and State Railways of Thailand about the need to strictly screen passengers in an attempt to contain the pandemic.

Infections in Thailand have jumped this month, prompting the government to close shopping malls, restaurants and other gathering venues to stop the pandemic. The nation’s capital imposed a partial shutdown from Sunday.

There has been one death linked to the virus in Thailand so far.

The increase in cases does not necessarily indicate how quickly the disease is actually spreading among the general population, since very few people have been tested, and the number of confirmed infections is bound to rise as testing increases among at-risk individuals. 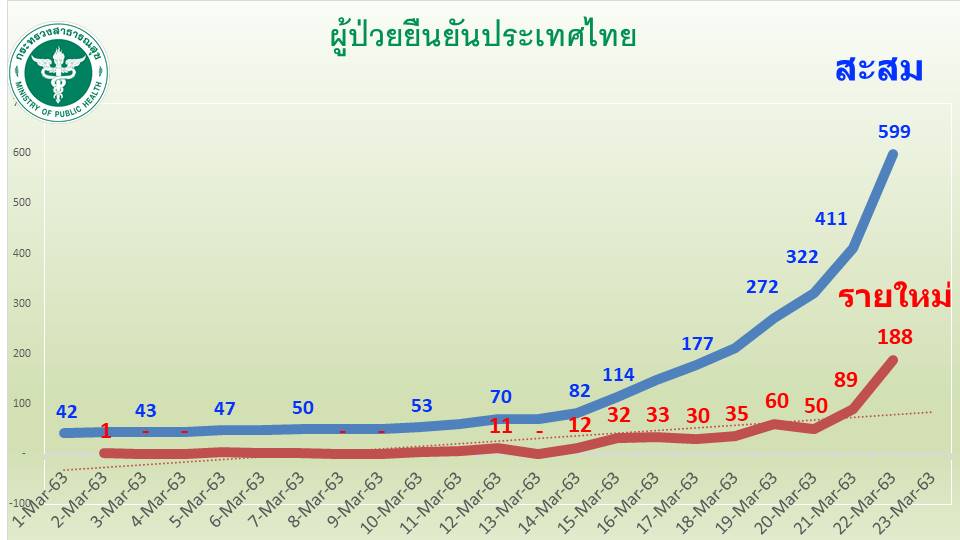