People, wearing face masks as a preventive measure against the spread of the Covid-19 novel coronavirus, queue up to renew their visas at the Government Immigration Center in Bangkok on Wednesday. (AFP photo)

The government approved a plan on Wednesday to allow all foreigners who entered legally to receive automatic visa extensions, to prevent long queues at immigration centres and stem the spread of the coronavirus, a senior immigration official told Reuters.

Thailand has closed its borders and banned entry to foreigners, except diplomats and work-permit holders to combat the Covid-19 outbreak.

Those foreigners who entered the country before the ban was imposed - who had visas, received visas on arrival or under visa waiver programmes - will not need to line up at often crowded immigration centres around the country to extend their stay.

The automatic visa extension has been granted until April 30, according to an interior ministry document. Police Lieutenant General Sompong Chingduang told Reuters the government could extend this deadline each month.

“The person whose visas has expired from 26th of March 2020 will be automatically extended to 30th of April 2020. There is no need to apply for a visa extension at Immigration Office for this period and will not be fined THB 500 per day for this case,”  the announcement said.

“Aliens who are due for 90 days reports between 26th of March 2020 and 30th of April 2020 are temporarily exempted from reporting in this period until further notice.”

Last week the government allowed migrant workers with expiring work permits to stay in the country, without the need to apply for extensions, until Thailand reopen its borders.

The country reported 111 new coronavirus cases on Wednesday. They included 42 Thais repatriated from Indonesia who had travelled South Sulawesi province for a religious gathering last month before the event was postponed.

In total, Thailand has reported 2,369 cases of the novel coronavirus, and 30 deaths. It has declared a state of emergency until the end of the month and imposed a nationwide 10pm to 4am. 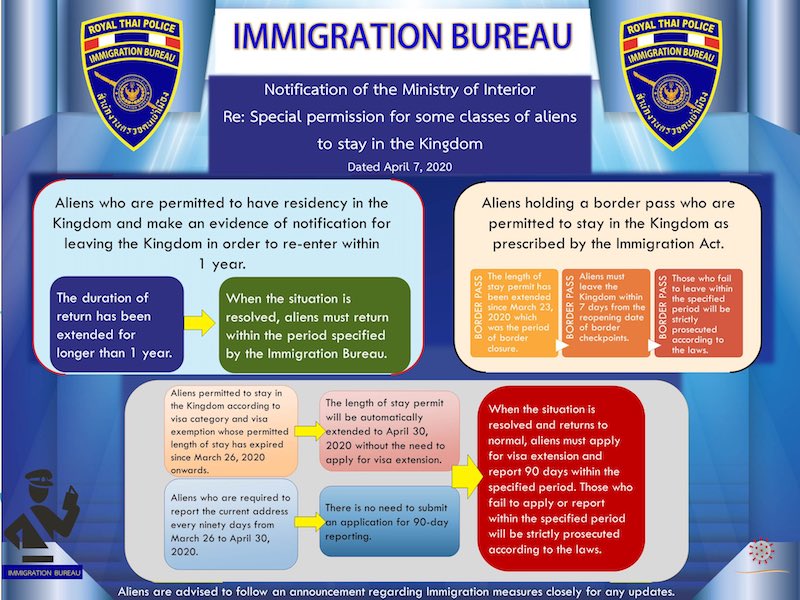