Dozens of people whose applications for the 5,000-baht aid was turned down gather at the Finance Ministry in Bangkok to demand explanations on Tuesday. (Photo by Nutthawat Wicheanbut)

Dozens of people have demanded to meet Finance Minister Uttama Savanayana at the ministry after their applications for the 5,000-baht financial aid were turned down.

Some 27 million people registered for the handout — 5,000 baht a month each for at least three months. The ministry estimated 9 million were eligible, according to the details of the third stimulus package where the money comes from.

According to the ministry’s criteria on the registration website, eligible applicants must be Thais aged 18 or more who are not members of the Social Security Fund and affected by the Covid-19 outbreak or related measures. They must be employees or workers who were laid off or faced pay cuts, temporary workers, or self-employed people.

The ministry said it would use artificial intelligence (AI) to screen the applicants, but did not elaborate.

Finance permanent-secretary Prasong Poontanate on Tuesday met them and answered their questions for about an hour. (continued below) 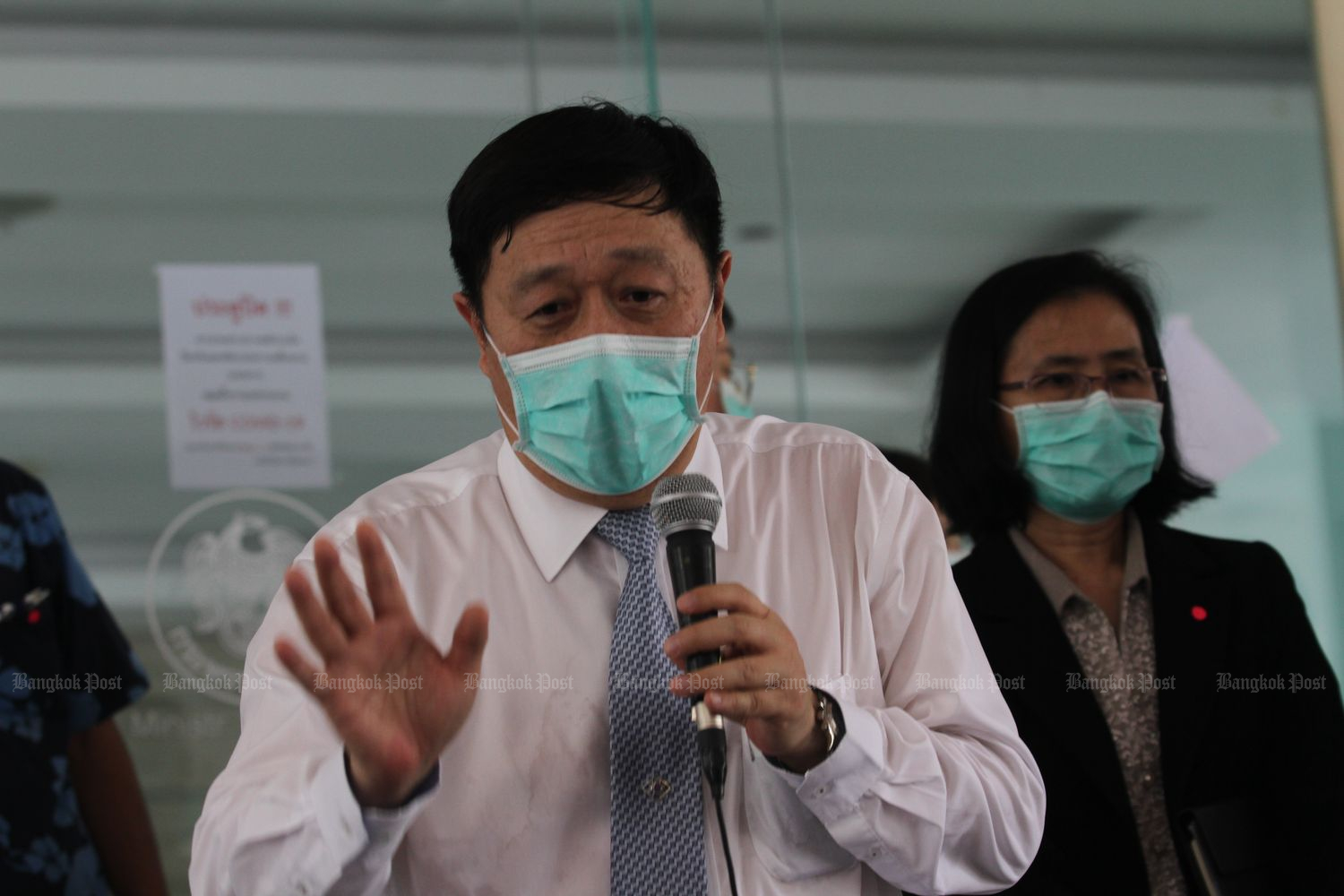 He explained those whose registrations were turned down could appeal at the website next week so there was no need to come to the ministry.

“Those who received a text message saying they were not qualified can appeal,” he said.

Mr Prasong said AI was only partially used in the screening of applicants. “We simply use it to match the registration data with existing government databases. For instance, when the system finds a person is in the Agriculture Ministry’s farmers database, his application is rejected.”

He cited another example of a tourist guide who became a taxi driver.

“The system will check whether he has been registered with related authorities. If he did not, he would not be qualified.”

In another case, a family of which parents are farmers might have put their son’s name as a member of the same household. The son will therefore not be eligible even though he is a taxi driver, not a farmer.

Such problems will be sorted out when they appeal, he said, adding the process could be done only at the website.

Those who cannot contact the call centres of Krungthai Bank and the Fiscal Policy Office can send their questions at the website, he added. (continued below) 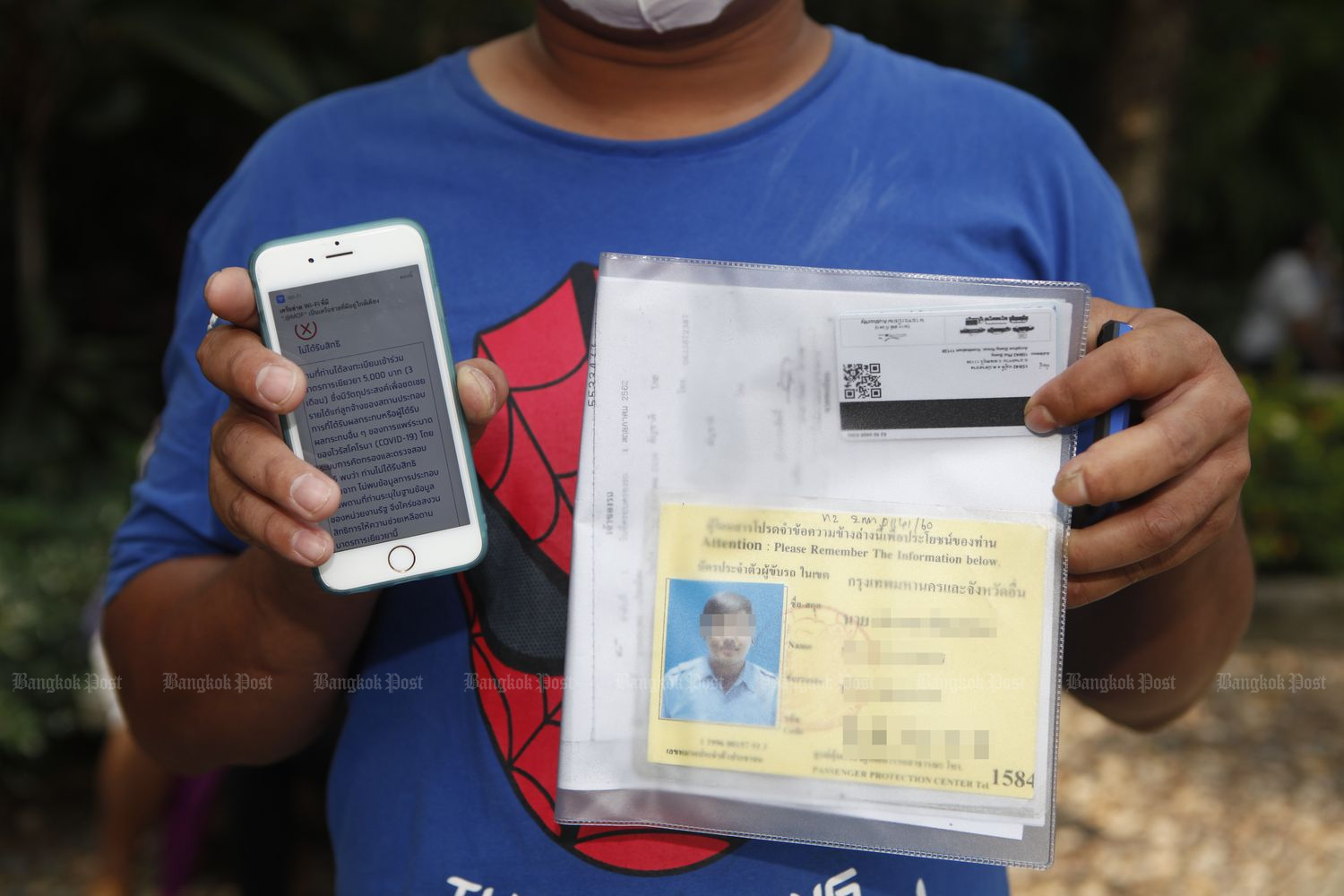 A demonstrator shows his taxi driver's licence alongside a text message informing him his application for the 5,000-baht aid was rejected. (Photo by Nutthawat Wicheanbut)

The ministry opened the registration for the aid on March 28 without setting the deadline. It estimated 3 million would be qualified. But the number of applicants turned out to be nine times that, prompting the ministry to warn about legal consequences for people who apply knowing they are not qualified. Some 700,000 cancelled their registrations after the warning.

The screening is ongoing but as of Tuesday, 27 million people registered, 4.78 million were disqualified and 2.4 million already received the money.

The ministry aims to finish screening the rest this week so an appeal process can begin next week for those who think they have been wrongly disqualified.

Many people who were turned down have complained they were rejected because the system thinks they are farmers, which they insist they aren’t.

Krungthai Bank explained farmers are not eligible for the aid because a separate package is in the pipeline to help the group.

All farmers are registered by household every year with authorities by the heads of the families, who give details of people in the same households and those who helped with farming.

Therefore, the system is programmed to screen out those classified as “farmers”.

The same set of data has been used to provide aid to farmers, the bank said.

Another group who are facing problems are those who were qualified but did not receive the money.

The state bank explained money transfer failures are due to several factors: their bank accounts might be closed or was dormant for more than one year; the accounts’ names do not match the applicants’ names; they chose to be paid by PromptPay but have not linked it with their accounts; or their personal data were incorrect. 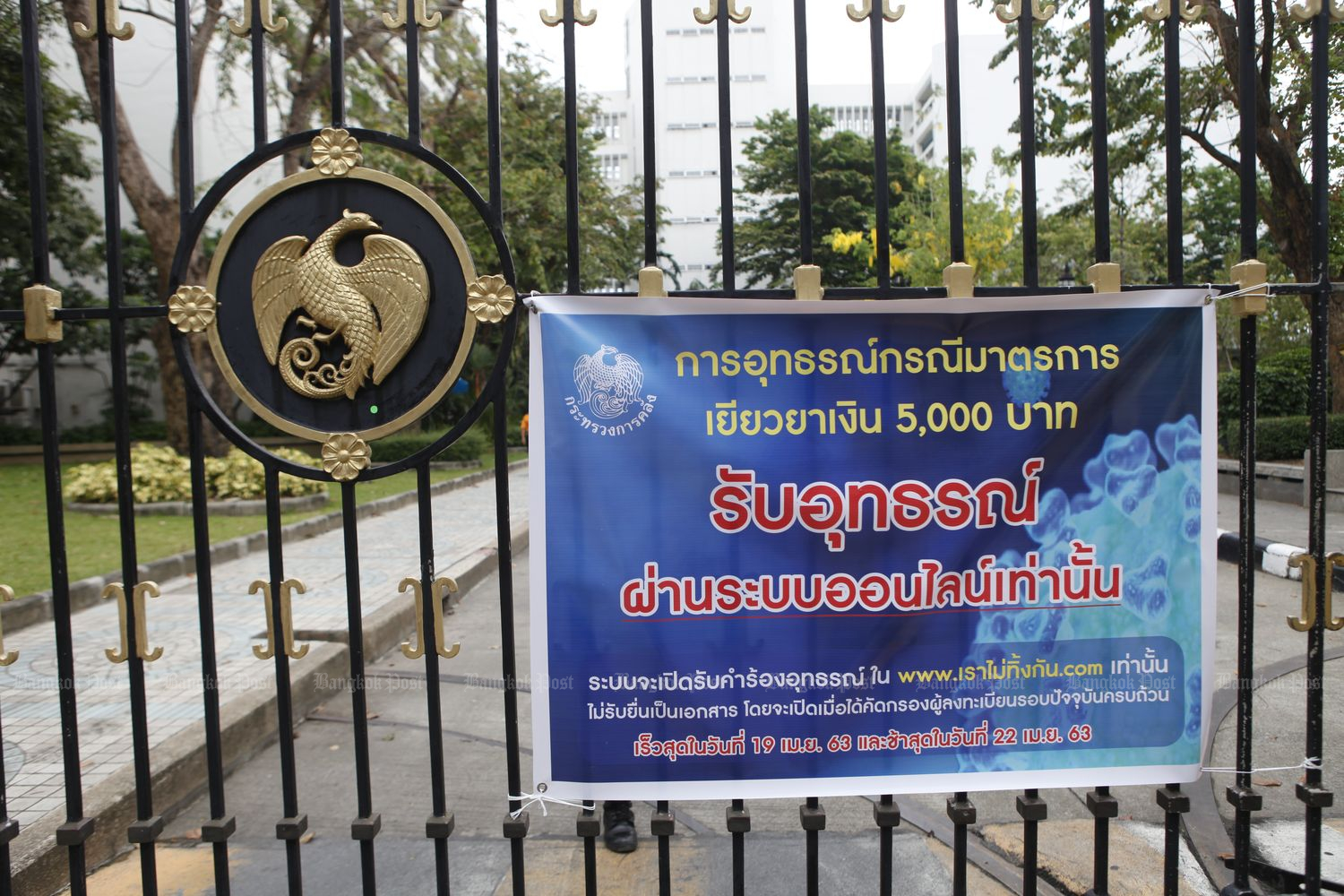 A sign is put on a gate to the Finance Ministry after dozens of people came to protest about the handout on Tuesday. The sign reads: "Appeal can be filed only at the website after all existing applicants have been screened, from April 19 or April 22 at the latest". (Photo by Nutthawat Wicheanbut)