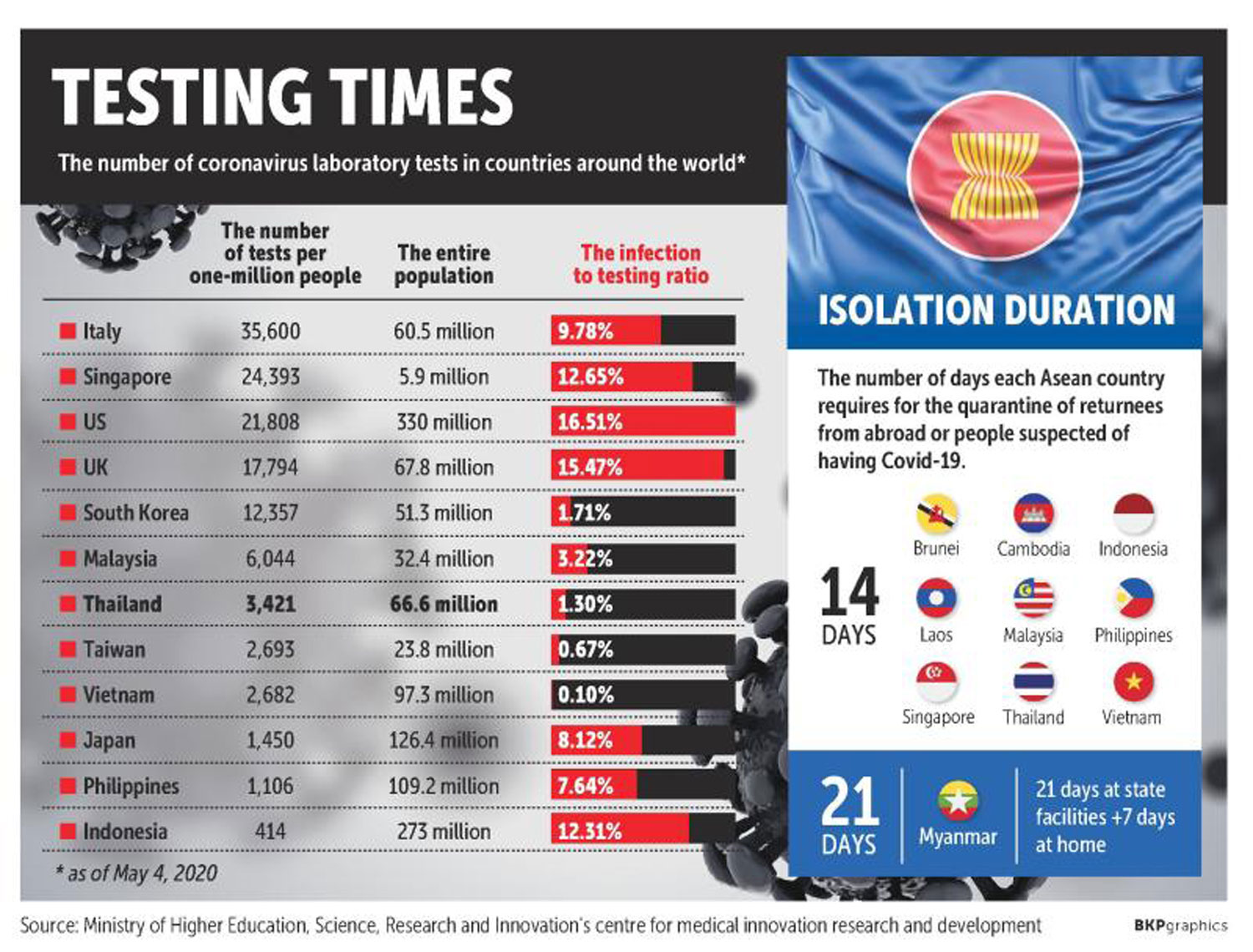 "We have tested more than 3,000 cases [per million people]. The ratio is not lower than those of Malaysia and others. Moreover, we are now ramping up our capacity because there are more private laboratories. Laboratories in Thailand have already tested around 40,000 samples over the past week," Dr Yong said during a webinar held by Abbott, a foreign pharmaceutical company.

As the number of new Covid-19 cases reported each day has fallen to single digits over the past 12 days, there has been speculation that these low numbers may be a reflection of insufficient testing rather than successful virus mitigation measures.

However, Dr Yong, head of the Centre of Excellence in Clinical Virology at Chulalongkorn University's Faculty of Medicine, said this criticism is unfounded and stressed that the country was trying to make use of all available laboratory capacity to carry out the "gold standard" reverse transcription-polymerase chain reaction (RT-PCR) swab tests.

As the Thai government slowly eases its lockdown measures, the Ministry of Public Health has pledged that it will hit 5,000 tests per million people in May with targeted areas including migrant worker camps and crowded communities in large cities and hospitals.

According to Dr Yong, the number of facilities able to test for Covid-19 now stands at 118, although he also noted that the disease is still not fully understood, particularly in terms of its window of infection.

"The novel coronavirus can live in patients from 4-45 days and they may remain asymptomatic for much of this time," he said.

"In some cases, patients who recover and test negative or undetectable before they return home test positive one or two weeks later because there are vestiges of the virus inside their bodies. These false positives are normal especially during the last stage of the disease," he said.

Prof Yong said Covid-19 is "a safe zone" for children, with a very low mortality rate among those under 10, although he warned against opening schools for the new academic year on July 1 as that could put family members at risk.

"Schools will likely become breeding grounds for superspreaders. Measures should be put in place to ensure safety, such as small class sizes and online learning," he said.

Dr Yong warned that the number of confirmed coronavirus patients is only "the tip of the iceberg", as there are likely to be a lot more asymptomatic carriers.

"In New York, a serology test found that 20% [of the population] were infected, but only one of 10 or 20 people exhibited symptoms. In China, a study was conducted on more than 40,000 people which showed that 80% of patients had mild symptoms, 14% were critical patients with pneumonia and nearly 5% were admitted to intensive care units," he said.