Long queues are seen at the cashiers at IKEA as it reopened after restrictions to halt the spread of the Covid-19 coronavirus were lifted in Bangkok on Sunday. (AFP photo)

Thailand reported three additional cases of the new coronavirus on Monday, bringing total cases to 3,031. No additional deaths were recorded, leaving the accumulated toll at 56.

The new cases were a man and a woman in Nonthaburi province near Bangkok and a woman in Phuket in the south of the country, Taweesilp Visanuyothin, a spokesman for the government's Centre for Covid-19 Situation Administration, said at a regular briefing.

Dr Taweesilp raised concerns that other people who had recently left Phuket for their home towns might be infected and spread the disease elsewhere in the country. He said 12 confirmed cases found in other provinces since March had spent time in Phuket.

“If Phuket province continues to take good care of the situation, the number of patients linked to Phuket will fall,” he said.

Some 2,857 patients in Thailand have so far recovered. 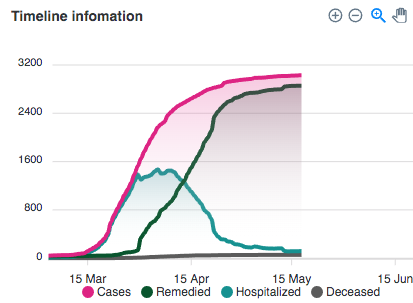