Monday easing on the way

Emergency end may be near if successful

A couple wearing protective face masks is pictured on the escalator inside a shopping mall on Friday, after the government eased isolation measures. (Reuters photo)

From Monday, the lives of people in the country will inch closer to normal as movie theatres, beauty parlours, fitness clubs, sports fields, recreational ponds, ballroom dancing venues, convention halls and zoos will be allowed to reopen.

The curfew will also be shortened to 11pm to 3am from June 1.

Gen Somsak Roongsita, secretary-general of the National Security Council, said on Friday that school buildings can reopen for admission examinations and short training sessions, but not for normal classes. Private tuition schools for vocational training, arts and sport, however, can reopen.

His comments were delivered at a meeting of the Centre for Covid-19 Situation Administration (CCSA), chaired by Prime Minister Prayut Chan-o-cha, where the lockdown-easing recommendations were endorsed by a committee tasked with evaluating the measures.

Meanwhile, cinemas will reopen with restrictions.

Panpimol Wipulakorn, director-general of the Health Department, said on Friday that up to two people would be allowed to sit next to each other, but any individual or couple would need three seats between them and the next person or pair in the row. 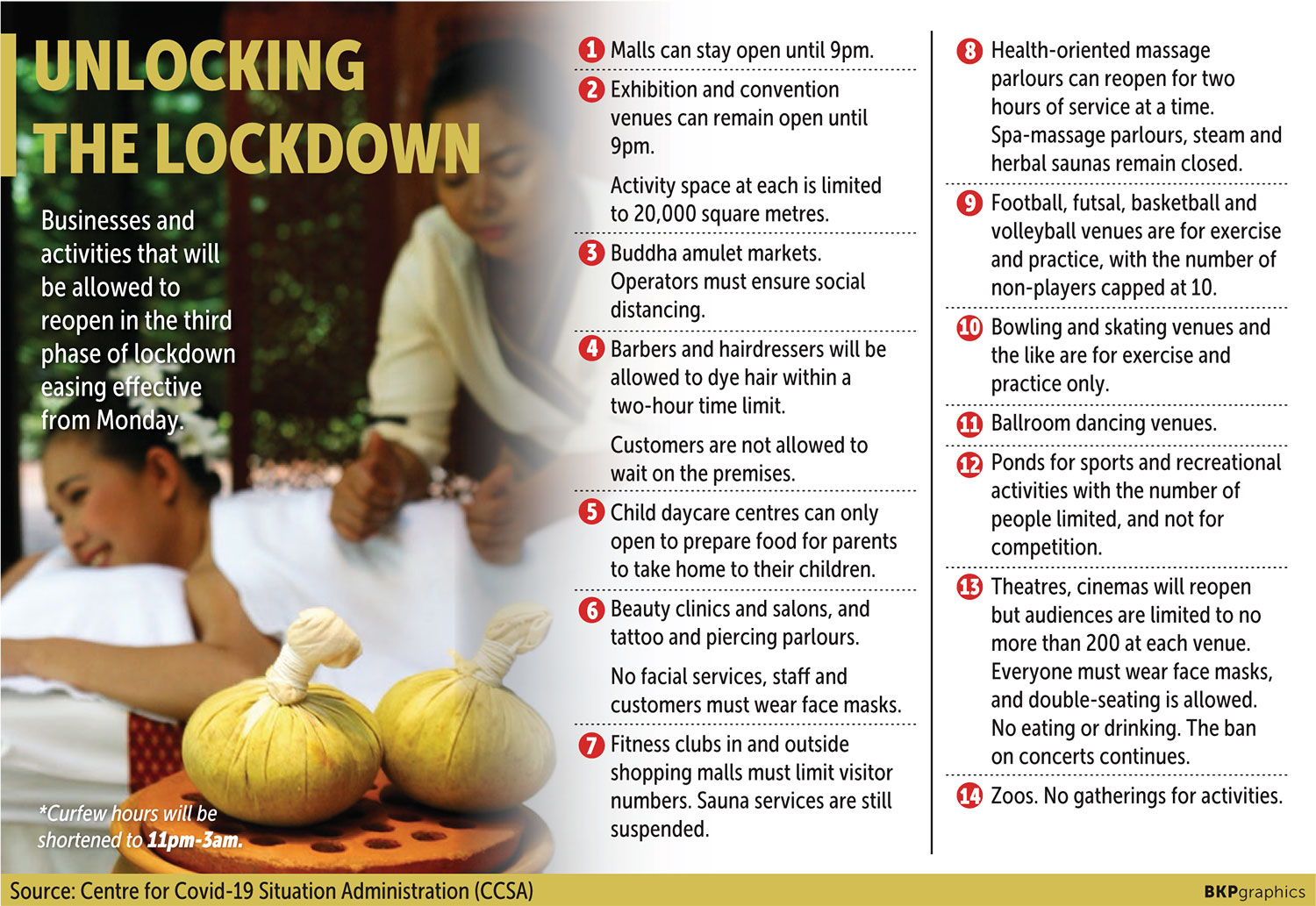 "This is to keep customers apart, as they will be watching a movie for two to three hours," Dr Panpimol said.

While inside the theatre, eating and drinking will be prohibited and face masks must be worn, she said.

Shopping malls will be able to remain open until 9pm. Exhibition and convention halls can also stay open until 9pm, but activity space at each will be limited to 20,000 square metres.

Hairdressers will be allowed to dye hair in addition to hair cutting, washing and drying but their services are still capped at two hours and customers are not allowed to wait on the premises.

Child daycare centres can open only for the preparation of food and drinks for parents to take home to their children.

Fitness clubs in and outside malls will reopen from June 1 but visitor numbers will be limited and sauna services are still suspended. 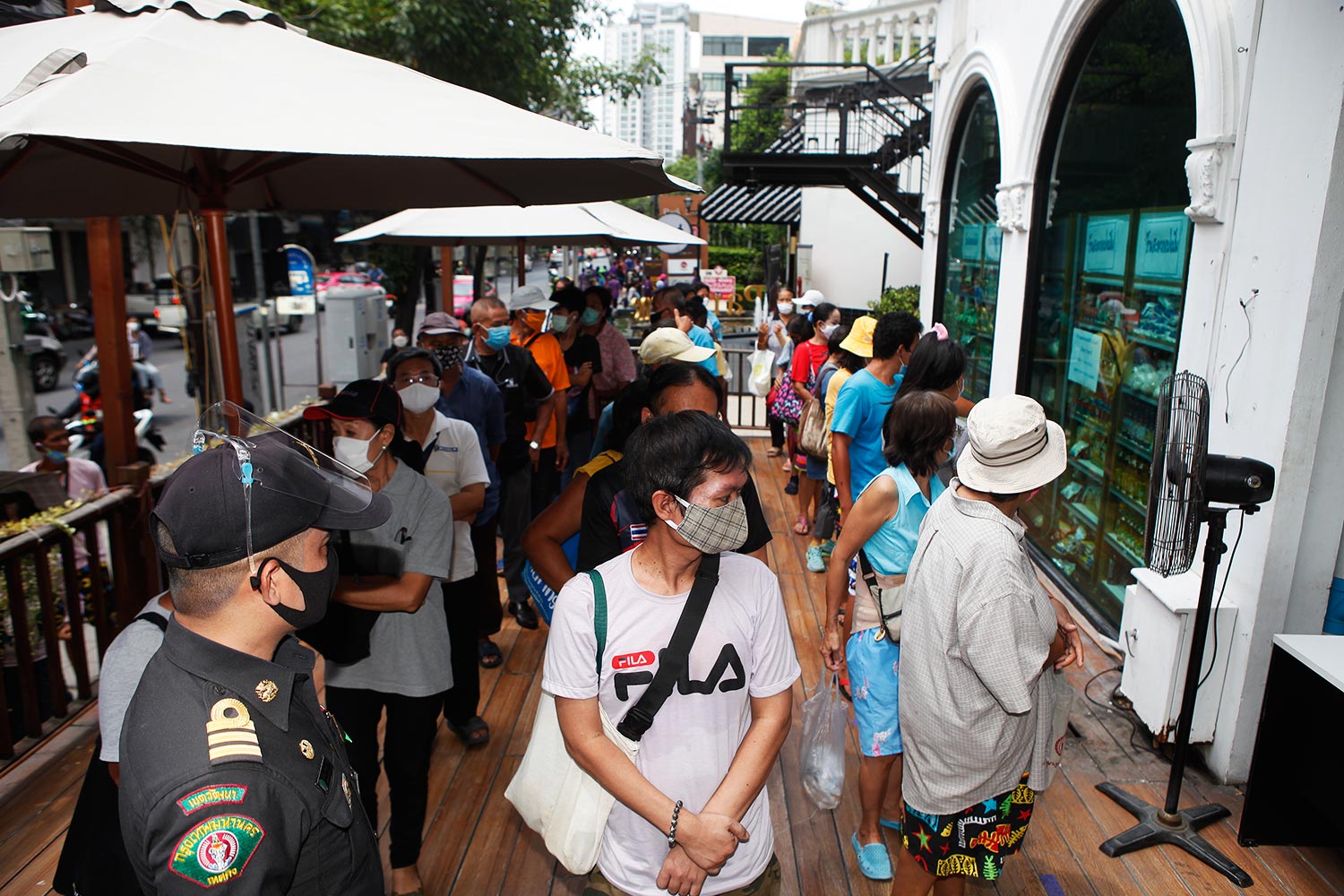 A bit of ‘pho’ luck: People queue at a Vietnamese eatery on Soi Ekamai 3. The eatery has transformed itself into a ‘sharing shop’ — the first of its kind in Bangkok — where customers pick free items within three minutes. Entry is limited to 12 people at a time. The free food is given on Fridays from 11am to 1pm and again at 3pm to 5pm. The promotion will last until June 26. (Photos by Nutthawat Wicheanbut) 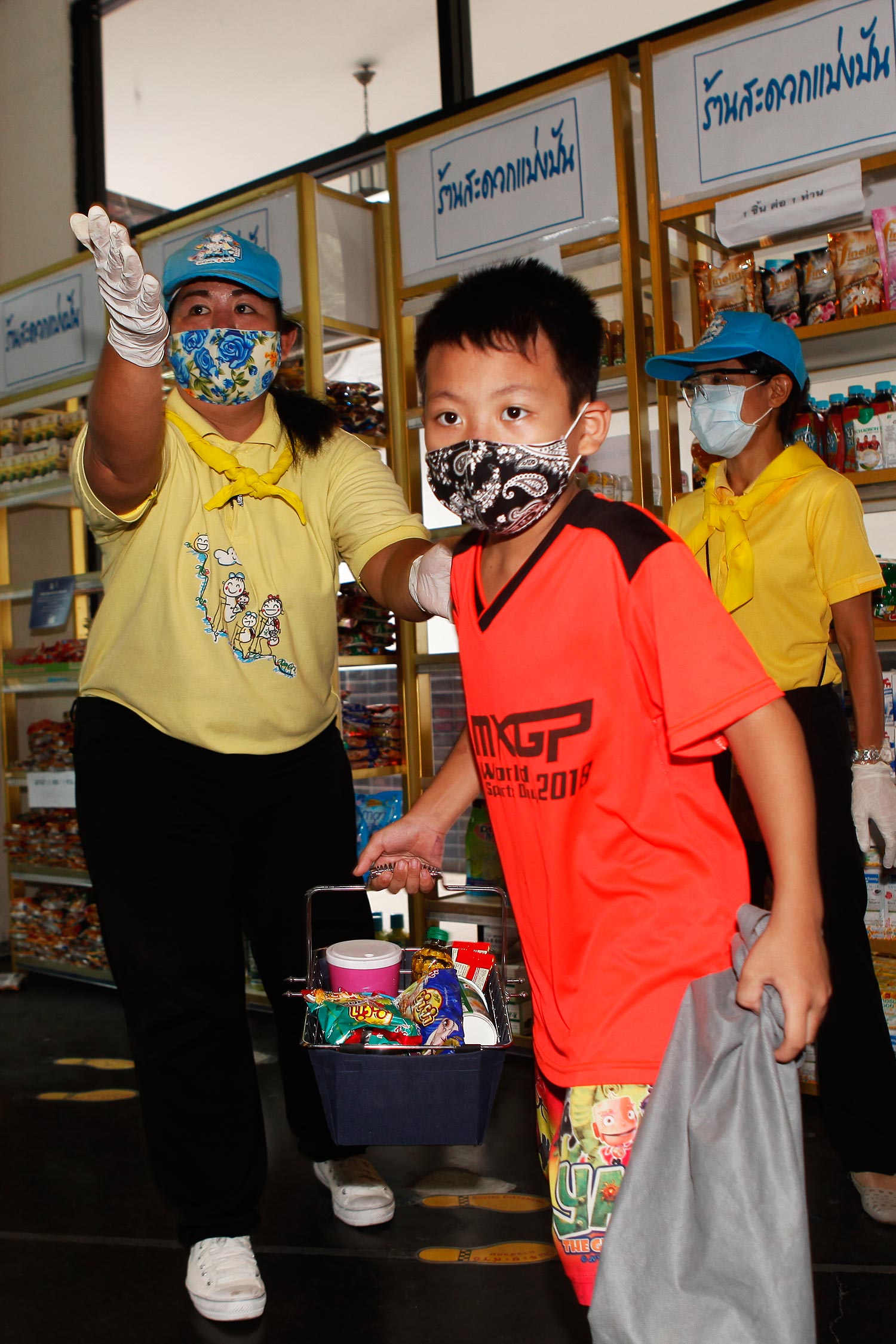 Permission for inter-provincial trips will remain at the discretion of governors, Gen Somsak said. But the ban on entry into the country by land, air, and water remains in effect.

During the meeting, Prime Minister Prayut Chan-o-cha stressed the need for relevant agencies to remain vigilant and follow up on the results of the lockdown easing.

As for preparations for the reopening of schools, Gen Prayut said that the Covid-19 crisis is a blessing in disguise as it has provided the opportunity to develop online learning tools so students in rural and/or remote areas can still have access to education.

He also said that if the third phase of lockdown easing yields satisfactory results, he will consider lifting the state of emergency.

The CCSA also agreed in principle with the NSC chief's proposal that a committee be set up to consider which law will be used as an alternative to managing the pandemic when enforcement of the emergency decree is lifted on July 1. The committee will be chaired by Deputy Prime Minister Wissanu Krea-ngam.

Public Health Ministry permanent secretary Sukhum Karnchanapimai also said at the meeting that the outbreak in Thailand has slowed as infected patients are all overseas returnees.

He added that a survey by the ministry had found that the public's vigilance against the disease has dropped although people continue to wear masks. Interprovincial-travel has shot up, with 26% of respondents engaging in such travel last week, as social gatherings have increased in frequency, said Dr Sukhum.

The survey also found that most people visited venues that are essential for everyday life such as markets, supermarkets, workplaces, hospitals, eateries and barbers, he said.

The CCSA on Friday reported 11 new cases of Covid-19, all returnees from Kuwait. CCSA spokesman Dr Taweesilp Visanuyothin said the returnees were of working age and were either asymptomatic or had mild symptoms. The total number of local Covid-19 cases is 3,076. Of these, 2,945 (96%) have recovered and 74 remain in hospital. The death toll is unchanged at 57.