B22.4bn packages to run through October

Medics from the Bamrasnaradura Infectious Diseases Institute and their families take a group photo at The SEA LIFE Bangkok. The aquarium invited them for a free visit to show its appreciation for their heroism in fighting the Covid-19 pandemic.  (Photo by Chanat Katanyu)

The cabinet on Tuesday approved in principle three stimulus packages worth 22.4 billion baht to reinvigorate domestic tourism hit hard by the coronavirus pandemic.

Deputy government spokeswoman Traisuree Taisaranakul said the packages proposed by the Tourism and Sports Ministry will run from July to October.

The Finance Ministry is overseeing a plan to borrow about 1 trillion baht to help people affected by the pandemic, repair the financial system, and restore economic security. An executive decree authorising the borrowing was passed by MPs on May 31.

Of the 1 trillion baht, 600 billion has been set aside for financial aid and health-related plans for those whose jobs and businesses have been affected.

The remaining 400 billion is for economic and social rehabilitation via projects aimed at creating jobs, strengthening communities and building infrastructure.

Ms Traisuree said the first package worth 2.4 billion baht will fund holiday travel for 1.2 million health volunteers and officials of sub-district hospitals, who will use the services of tour firms.

The second package worth 18 billion baht will fund subsidies for accommodation, food and other services provided at tourist destinations. 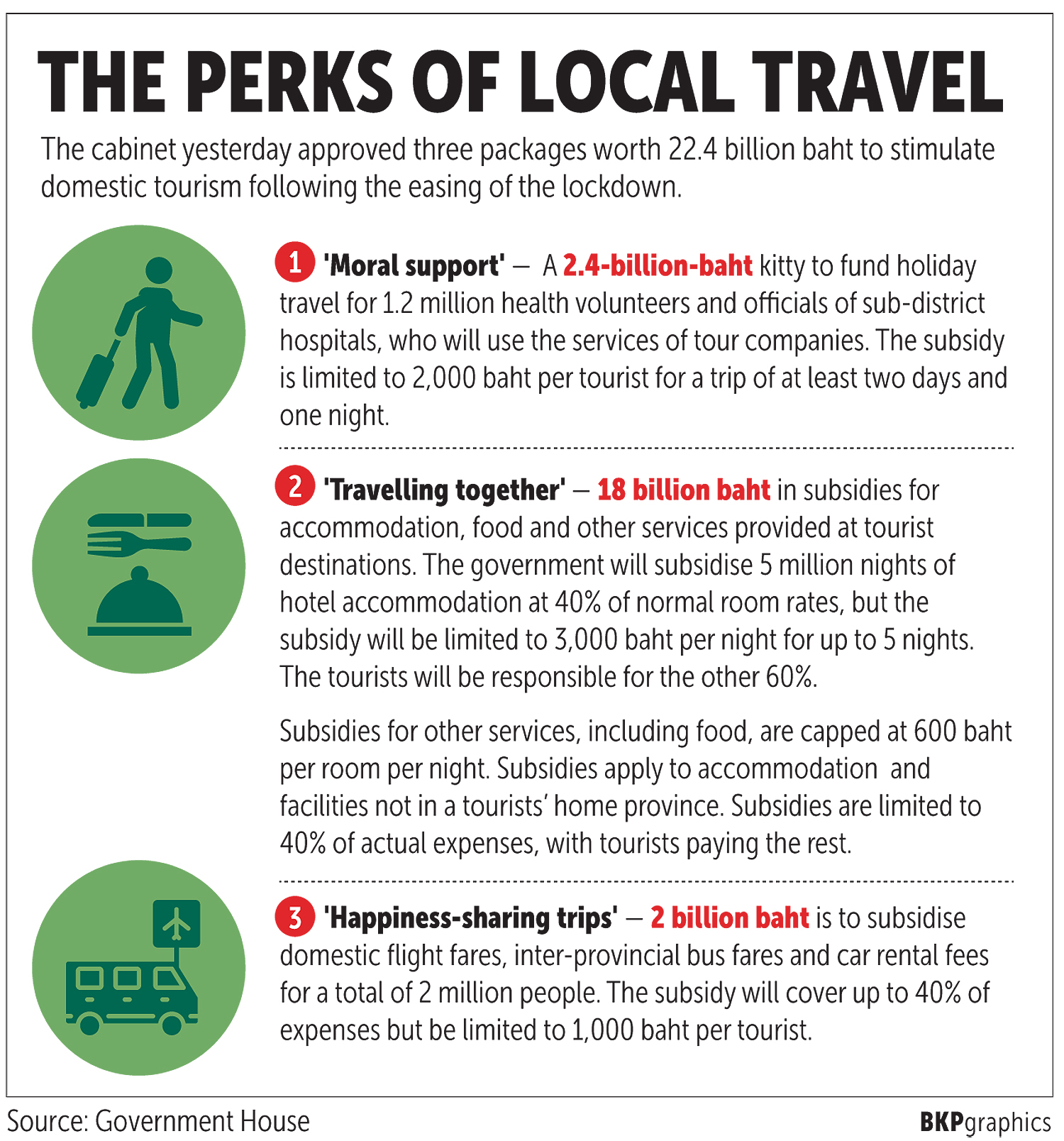 The third package worth 2 billion baht is to subsidise domestic flight fares, inter-provincial bus fares and car rental fees for a total of 2 million people. The subsidy will pay up to 40% of expenses but be limited to 1,000 baht per tourist.

People will be able to register for the scheme via a Krungthai Bank platform, the spokeswoman said.

The cabinet told the Tourism and Sport Ministry and the Tourism Authority of Thailand to present details of the packages for consideration within two weeks, Ms Traisuree said.

Meanwhile, the cabinet on Tuesday also approved four aid packages for people hurt financially by the Covid-19 pandemic who have not previously been given help.

Deputy government spokeswoman Rachada Dhnadirek said the recipients included 1,164,222 holders of state welfare cards who have not received any state assistance during the pandemic.

They would be given 1,000 baht each for three months, May to July, with 3.49 billion baht allocated to the package.

Another group was 302,160 people who were unsuccessful in registering for help on the website raomaithingkun.com ("Nobody will be left behind"). They would also receive 1,000 baht each for three months.

A budget of 906 million baht was allocated for this group, Ms Rachada said.

The third group are people in a vulnerable state selected by the Ministry of Social Development and Human Security.

There were 6,781,881 people in this group who had not received any state assistance before.

Each would receive 1,000 baht a month for three months, from May to July, on top of the existing allowances for newborns, the disabled and the elderly. A budget of 20.3 billion baht was set aside for this group.

The fourth group was farmers whose lives were affected by the pandemic. They would receive 5,000 baht each for three months. The budget was 3.8 billion baht.