The normally lively nightlife in Bangkok has been dead for months with entertainment venues ordered to shut to prevent the spread of the coronavirus. (Photo by Jetjaras Na Ranong)

Thai nightlife will soon be back in full swing as a key member of the virus-fighting state agency on Sunday promised to allow pubs, bars, karaoke parlours and other entertainment venues to reopen their doors.

The decision was reached in talks between Nattapol Nakpanit, a key figure at the Centre for Covid-19 Situation Administration (CCSA), and representatives of nightlife and musicians. It still needs endorsement, however, by the full-fledged CCSA meeting on Friday. 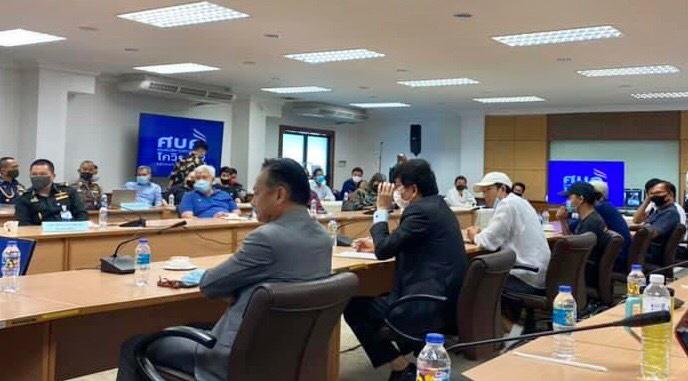 Representatives of nightlife operators and musicians hold talks with Centre for Covid-19 Situation Administration officials at the Office of the Civil Service Commission, opposite Government House, on Sunday. (Photo by Wassana Nanuam)

Musicians and entertainers made an emotional appeal on Thursday to the government to allow them to get back to work as the long closure had put them in severe financials straits.

Gen Nattapol said after the talks he will recommend to the full-member CCSA in a meeting on Friday that they be allowed to get back to work, but stressed the need for proper measures to prevent Covid-19 from rebounding.

The emergency decree will stay in place at least until the end of this month and it can be extended by the centre if authorities remain worried about the outbreak. Thailand has recorded no new local transmissions for 27 days, with recent cases imported by Thais returning to the country.

Sanga Ruangwattanakul, president of the Khao San Business Association, who was in the talks, said all participants were satisfied with the outcome and expected to go back to work on July 1.

All nightlife operators have prepared plans to prevent virus transmission based on the guidelines of the Public Health Ministry, he added.

A representative of the entertainment businesses said operators in other provinces needed the green light from provincial governors, since they have been given full authority to make the decision in their jurisdiction.

It remains unclear whether the planned reopening will include wet massage parlours.