No parades but plenty of red jerseys and joyful messages online

Singer Pongsit Kamphi posts a picture of himself in a Reds jersey with a message saying "champions after 30 years of waiting". (Photo from Pu Pongsit Office Facebook account)

Liverpool fans from all walks of life in Thailand — including controversial politicians — celebrated the Reds’ first English Premier League title on Friday.

Former cabinet member Nattawut Saikuar wore a Liverpool shirt to the Criminal Court in Bangkok to hear the Supreme Court’s final ruling in a long-running case.

Unfortunately for Nattawut, he will not be able to watch his beloved team play for some time.

The Supreme Court upheld the Appeal Court’s sentences of two years and eight months for Nattawut and other red-shirt leaders for a violent protest 13 years ago. 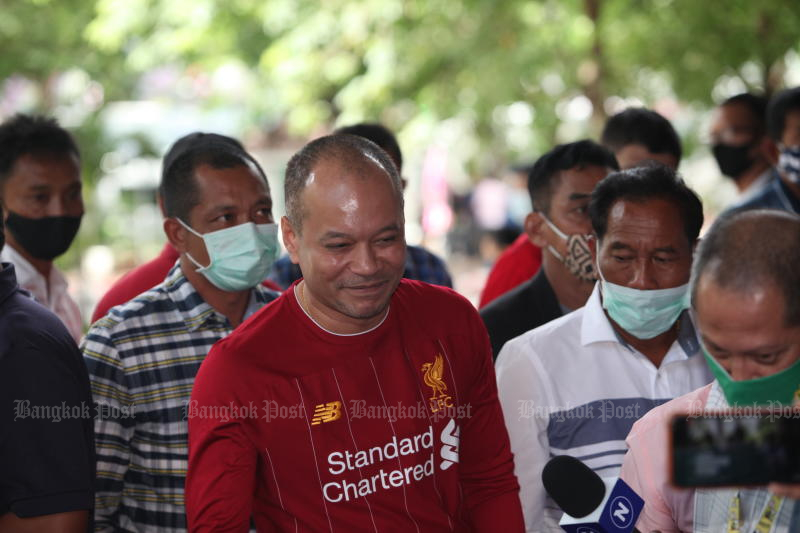 Pheu Thai MP Wan Yubamrung, meanwhile, said in an online post that while Liverpool supporters were celebrating the club’s first English top-flight title for 30 years, a number of Manchester United fans were struggling like earthworms. The once-mighty side is struggling to grab a top-four finish that would qualify them for the European Championship tournament next season.

“They boast about their past glory,” he wrote. “Why don’t you live in the present moment?”

Palang Pracharath MP Wathanya Wong-opasri, former manager of the Thai U23 football team, wrote “the day we have been waiting for — we are the champions” along with a photo of herself inside Anfield.

Muay Thai fighter Buakaw Banchamek also posted a photo of himself outside Anfield.

But he reminded them that Liverpool have won only one Premier League title, like Blackburn and Leicester, while Manchester United have been champions 13 times, Chelsea five, Manchester City four and Arsenal three.

Meanwhile, a businessman in Phayao spent millions of baht to turn a truck into a Liverpool vehicle.

He aims to hold a celebration parade but his plan may have to be scrapped as it could be deemed a violation of the state of emergency.