Prime Minister Prayut Chan-o-cha has a press conference after a meeting of the Centre for Economic Situation Administration at Government House in Bangkok on Wednesday. (Screenshot from Government House's Facebook page)

The government will hand out a total of 51 billion baht to 24 million people, mostly those with low incomes, to boost domestic consumption and support the economy which is reeling from the effects of the coronavirus pandemic. 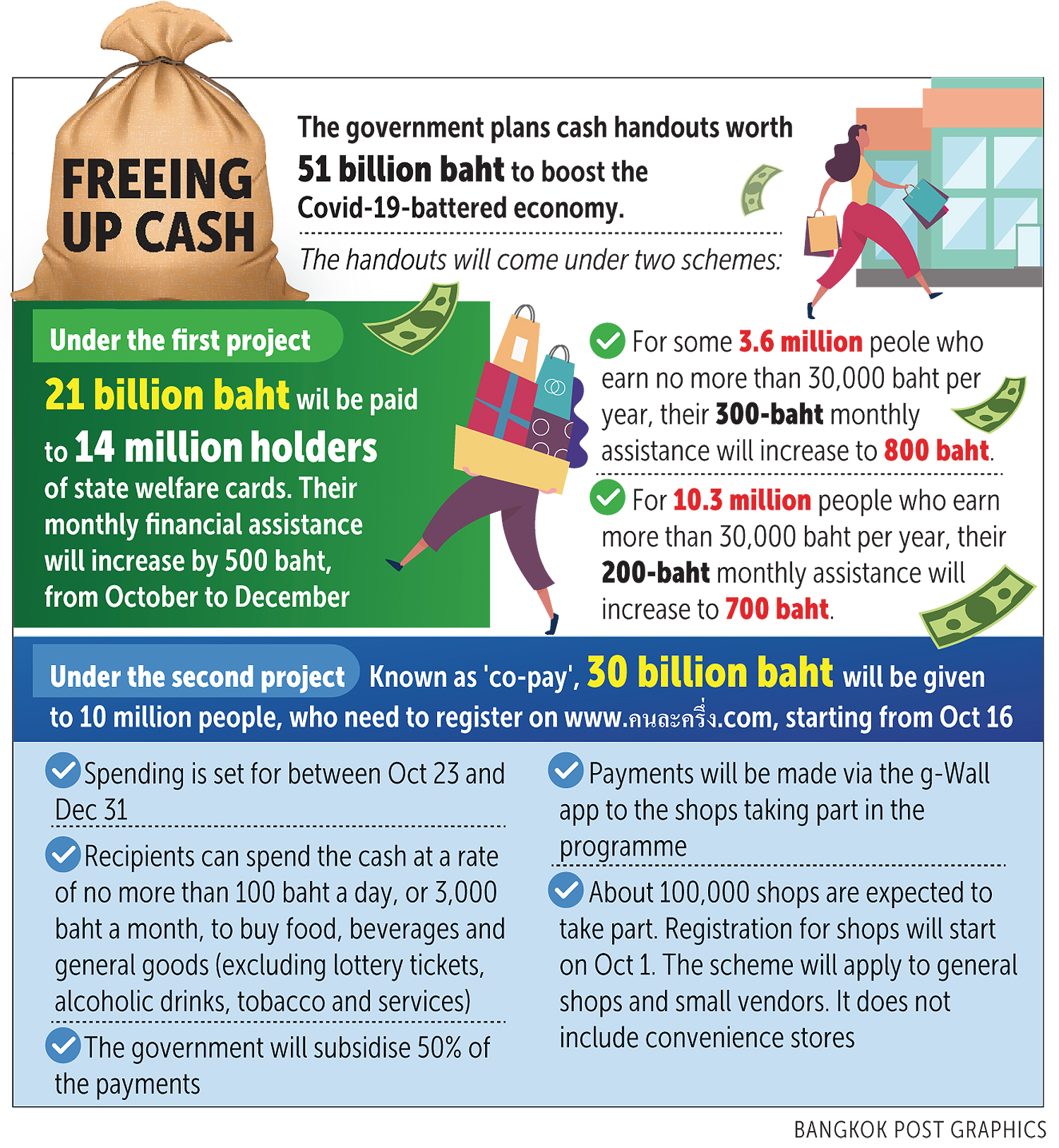 The decision was made at Government House on Wednesday by the Centre for Economic Situation Administration (CESA).

Monthly financial assistance would see an additional 500 baht given to 14 million low-income earners who have state welfare cards, for three months from October to December, totalling 21 billion baht.

The half-half co-payment scheme will allow registered people to shop at small shops, with the government subsidising 50% of the payment, up to 50 baht per day, for the customer's payment of 100 baht.

Thailand has since June eased most of its coronavirus restrictions due to its low infection numbers, but a ban on foreign tourists since April is limiting the speed of domestic recovery.

The handout plans, to be financed by some of the government's 1 trillion baht borrowing, still needs cabinet approval, Mr Anucha said.

Prime Minister Prayut Chan-o-cha said after the meeting that the most important thing at this time was to help low-income earners, while maintaining government and private investment in projects that would generate a sustainable national income in the future.

"We have to look at medium- and long-term problems too as we don't know when the Covid situation will end," Gen Prayut said.

Danucha Pichayanan, deputy secretary-general of the National Economic and Social Development Council, said that there are currently about 3.6 million people who earn less than 30,000 baht per year and receive 300-baht monthly financial assistance under the state welfare scheme. Once the cash handout scheme takes effect, assistance will increase to 800 baht.

The CESA instructed the Board of Investment and the Interior Ministry to change the rules to allow those who are granted Smart Visas to invest in property, he said.

The CESA also approved a proposal by the Bank of Thailand to extend credit terms to between 30 to 45 days to help small and medium-sized entrepreneurs affected by the economic fallout.

Kanchana Tangpakorn, director of the Bureau of Tax Policy, said the co-pay programme would be applied to the purchase of food, beverages and general goods (excluding lottery tickets, alcoholic drinks and tobacco) from small vendors. Registration for shops will start from Oct 1.