Protesters display a mockup resignation letter for Gen Prayut to sign before presenting it to a representative of the Prime Minister on Wednesday. (Photo by Wichan Charoenkiatpakul)

At the climax of a massive demonstration on a day that saw competing rallies, representatives of the pro-democracy movement submitted a mock resignation letter to the prime minister through Pratheep Keerathirekha, a deputy secretary-general of the prime minister, with Pol Lt Gen Pakkapong Pongpetra, commissioner of the Metropolitan Police Bureau, as one of the witnesses.

They then announced the end of the rally.

The United Front of Thammasat and Demonstration, one of the rally organisers, posted a Facebook message saying Gen Prayut had no option but to resign.

Protesters halted tonight’s march from Victory Monument to Government House at a barricade built by police at Chamaimaruchet Bridge.

They issued their ultimatum hours after Gen Prayut said he will lift the emergency decree in Bangkok provided that rallies remain peaceful. In a television address he called for the political conflicts to be resolved in Parliament. 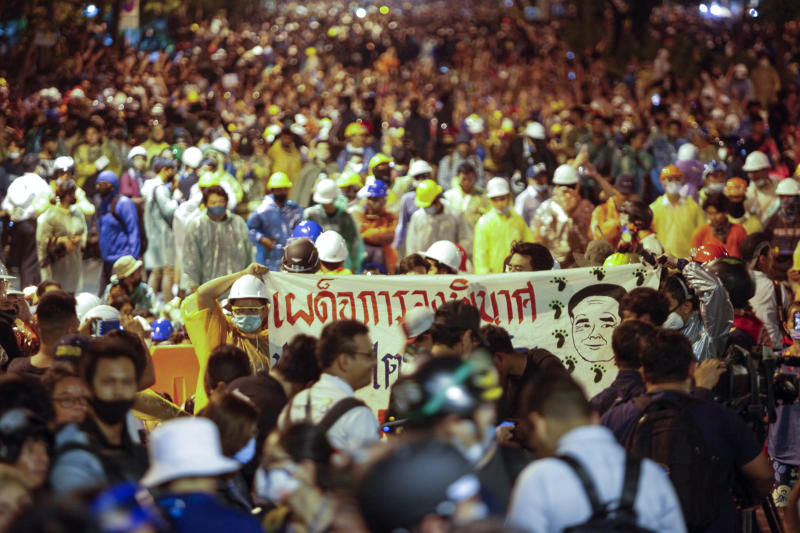 Protesters end their rally near Government House on Wednesday after submitting a mockup letter demanding that Prime Minister Prayut Chan-o-cha resign in the next three days. (Photo by Pattarapong Chatpattarasill)