Prime Minister Prayut Chan-o-cha addresses the nation about the recent outbreak of Covid-19 in the country. In the televised address, he hinted at travel curbs and a potential ban on New Year celebrations. (Government House photo)

Prime Minister Prayut Chan-o-cha has signalled a halt to the easing of travel restrictions and the reimposition of tough disease control measures, including a potential ban on New Year's celebrations, in the wake of the Covid-19 outbreak in Samut Sakhon at the weekend.

"This outbreak serves as an important reminder of how serious a threat the Covid-19 pandemic remains to our nation. At the same time, the global Covid situation has also taken a sudden and serious turn for the worse," the prime minister said during a TV Pool broadcast on Tuesday.

He went on to say that December has seen the numbers of deaths each week surge into the hundreds and even thousands in many countries.

"The worsening global Covid-19 situation will have a serious impact on Thailand, and we must prepare ourselves.

"First, it means the world economy will take longer to recover which will impact our own economic recovery, too.

"Second, it means that we will have to be even more careful about relaxing rules to let people from other countries into Thailand. 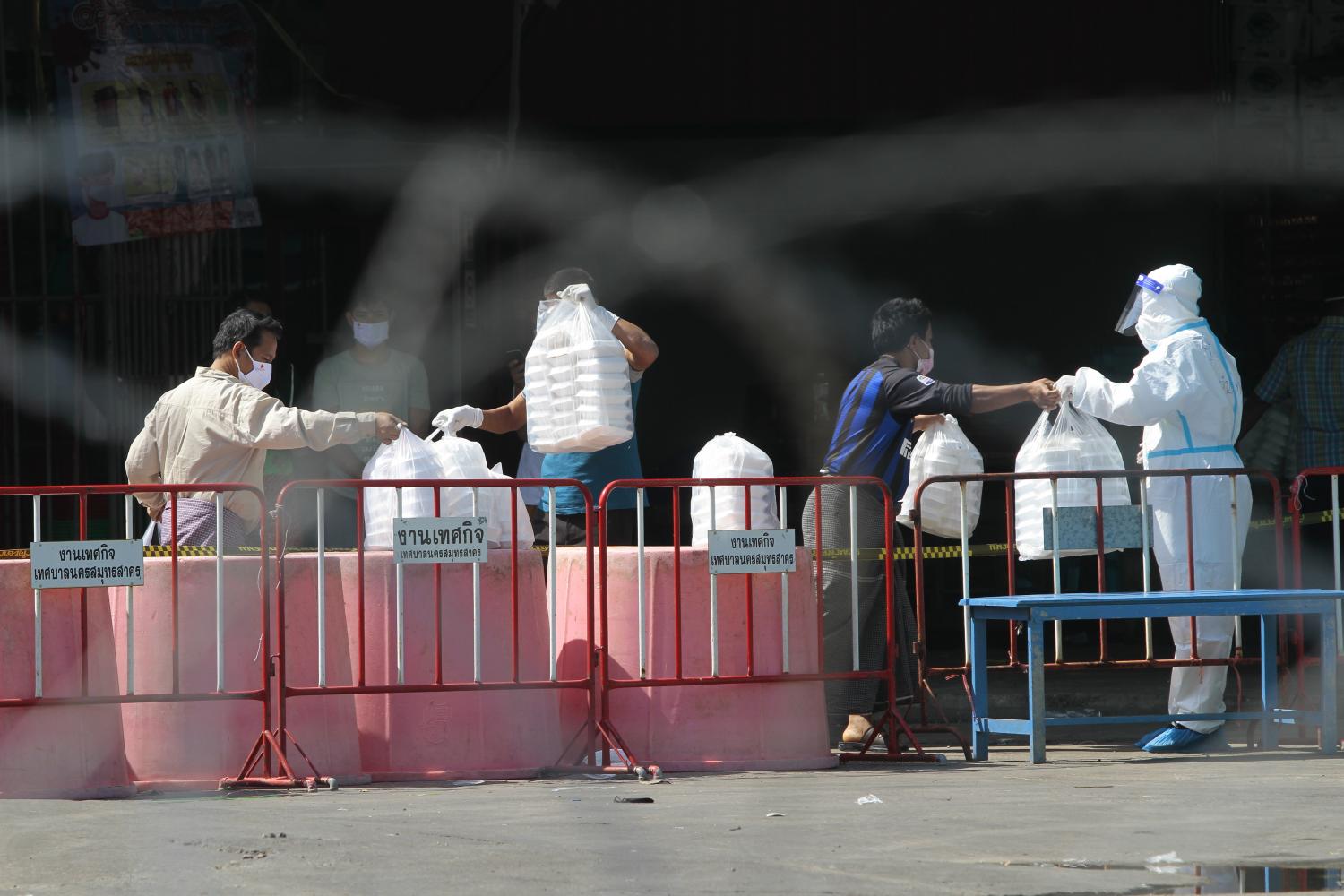 A health official in protective gear delivers food packs to people placed in quarantine within the Central Shrimp Market, which has been sealed off in the wake of the new coronavirus outbreak. (Photo by Arnun Chonmahatrakool)

"Since the situation is so bad outside of Thailand, the biggest risk is that people entering the country will bring the disease in with them, and this could spell disaster for our health system and have a catastrophic impact on the economy," the prime minister said.

"That is why we must be especially careful at our airports, train entry points, bus and car entry points, sea entry points and all other places where people enter the country," Gen Prayut said.

"I thank the many people involved in ensuring the security of these entry points for their diligence because it only takes a few infected people slipping past them to create great economic and health hardship for hundreds of thousands of others," he said.

"And the third consequence of the worsening global situation will be the need for Thais to keep their guard up inside Thailand.

"As a result, I may need to introduce additional measures, especially relating to whether and how New Year celebrations should be conducted," he said.

Gen Prayut said he will meet with the Centre for Covid-19 Situation Administration (CCSA) this week before making any official announcement.

"It is a decision that requires careful thought. But what the world has seen now is that being relaxed about health precautions leads to great economic suffering for everyone in the country."

In his statement, Gen Prayut took aim at human smuggling networks that are also to blame for the reemergence of Covid-19 in the kingdom.

"As for the networks that bring illegal immigrants into the country, they must be prosecuted without any leniency whatsoever, regardless of whether they are people with official positions. This latest flare-up is primarily due to such illegal immigrants," the prime minister said.

"Even though the road to recovery is still a long one, I am confident that if we can still work together, we can continue to be among the least affected countries in the world,'' Gen Prayut said.

The cabinet on Tuesday approved draft amendments to the Communicable Disease Act which include giving authorities the right to prosecute anyone who contracts the virus and exhibits symptoms without seeking medical consultation.

Meanwhile, the CCSA on Tuesday reported 427 new cases, including 397 migrant workers, raising the overall total since the start of the pandemic to 5,716.

At least 16 of the new transmissions could be traced to a domestic origin, according to the centre.

The virus was also detected in 14 people who recently arrived from other countries.

Dr Taweesilp Visanuyothin, the CCSA's spokesman, all sixteen locally infected people were linked to the shrimp wholesale market at the epicentre of the new outbreak in Samut Sakhon province.

They included five in Bangkok: a 49-year-old female vendor, a male worker, 28, a female government official, 54, and two other female vendors, aged 52.

Of the 397 infected migrant workers, 90% were asymptomatic. They were among 2,015 tested people at the market where 44% of tests performed had come back positive, Dr Taweesilp said.