SSF subscribers to get 50% of wages

People wait patiently in a queue to receive assistance at a Covid-19 testing centre in Baan Eua Arthorn Tha Chin in Samut Sakhon on Tuesday. (Photo by Arnun Chonmahatrakool)

The cabinet has approved the Labour Ministry's proposal to give relief payments to subscribers of the Social Security Fund (SSF) who have been made jobless by the Covid-19 pandemic, government spokeswoman Rachada Dhnadirek said on Tuesday.

Under the proposal, insured workers will receive 50% of their daily wages based on a maximum monthly salary of 15,000 baht for a maximum of 90 days. The scheme took effect on Dec 19.

The move is aimed at alleviating hardship among insured workers in high-risk provinces such as Samut Sakhon, Samut Songkhram, Nakhon Pathom, Nonthaburi and Bangkok following the Covid-19 outbreak. The number of insured workers in these provinces is estimated at 5.7 million and it's estimated the relief scheme will cost the fund about 5 billion baht.

"This is to give assurances to workers in case of business shutdowns," Ms Rachada said. 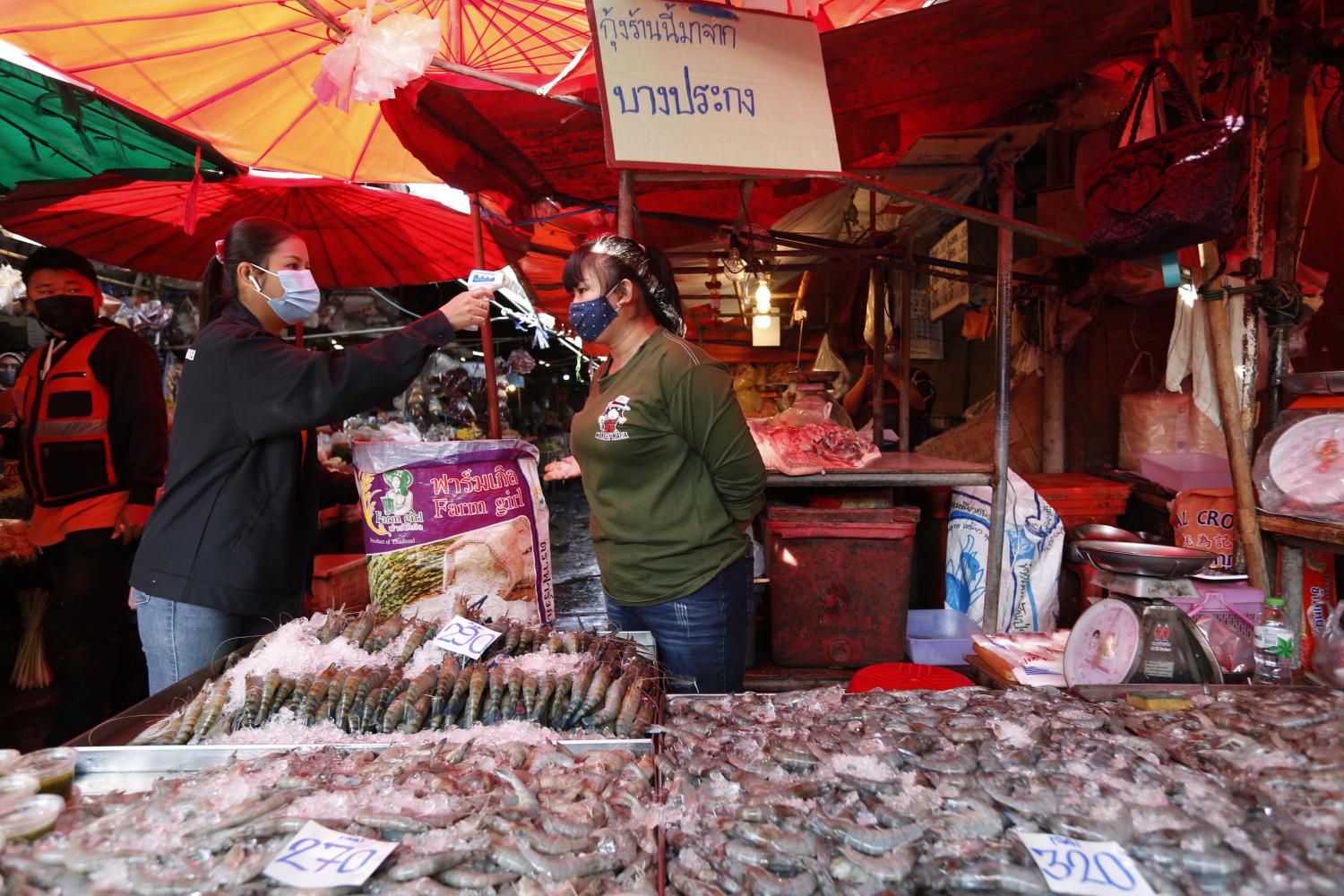 An official from Klong Toey District Office checks the temperature of a seafood vendor at Klong Toey market. On her sign, the vendor informs her customers her shrimps are from Chachoengsao's Bang Pakong district, not Covid-hit Samut Sakhon. (Photo by Wichan Charoenkiatpakul)

When the Covid-19 pandemic hit early this year and forced businesses to close, the cabinet approved a proposal to pay 62% of daily wages based on a maximum monthly salary of 15,000 baht for a maximum of 90 days to insured workers who were forced to stop working. The relief scheme ended in August.

Ms Rachada said the cabinet also approved the reduced contributions to the SSF by employers and employees from 5% to 3% for a period of three months from January 2021 to March 2021.

"We've evaluated the situation and decided to make plans for it. It should help ease worries for workers who may lose their income. The prime minister has instructed the ministry to take care of those workers," he said. 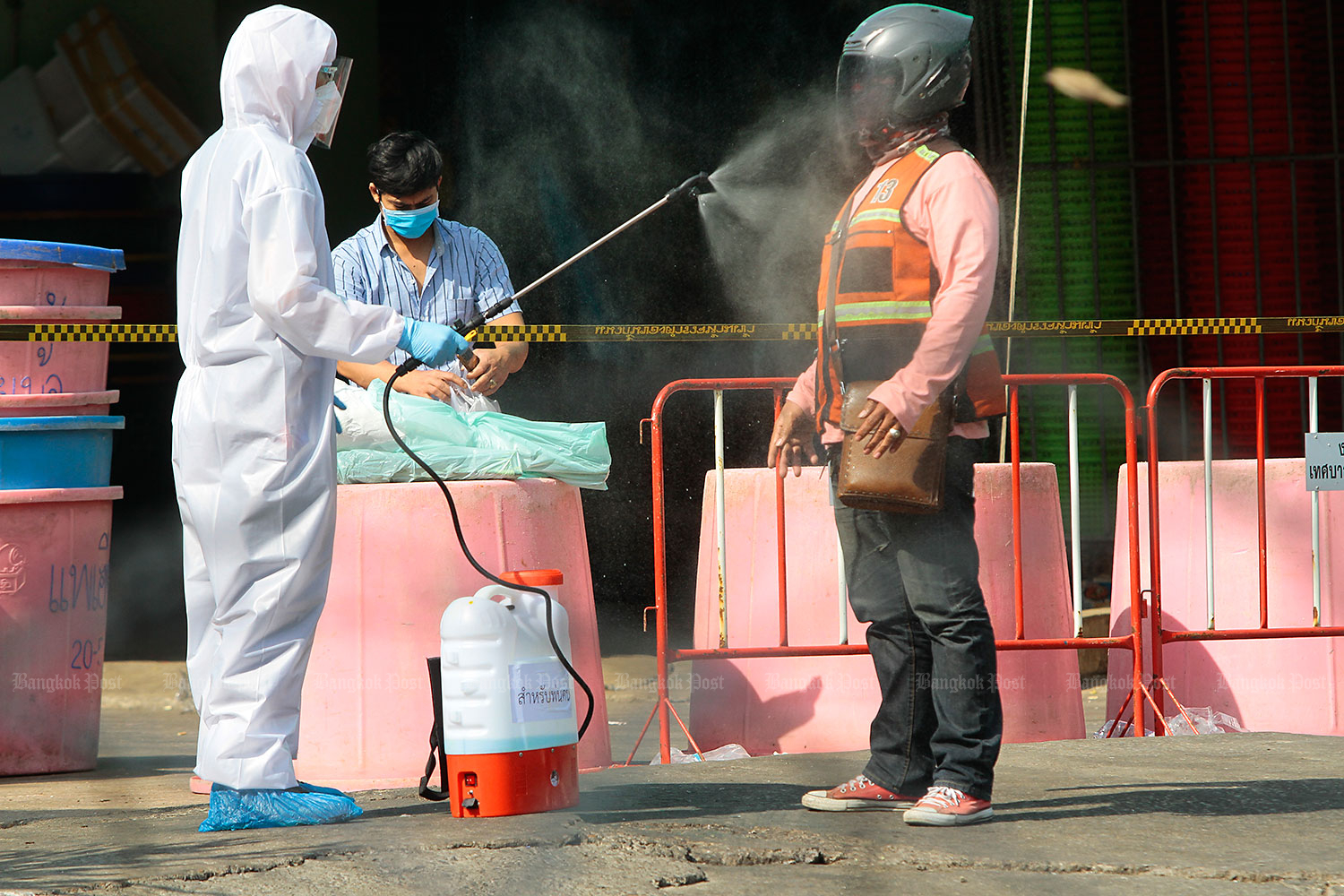 A motorcycle taxi rider is sprayed with disinfectant at the Talad Klang Kung, or Central Shrimp Market in Samut Sakhon. (Photo by Arnun Chonmahatrakool)

He said the relief compensation scheme was approved by the SSF's board before it was proposed to the cabinet for a final say.

According to Mr Suchart, the ministry initially earmarked 10 billion baht to help workers affected by the pandemic. When asked about the surge in infections among migrant workers in Samut Sakhon, he said labour officials are working closely with police and local officials to curb the trafficking of illegal workers from neighbouring countries.

Mr Suchart did not rule out the possibility that a reprieve be granted to illegal migrant workers to encourage them to report to authorities and take Covid-19 tests. However, he said such a proposal, if any, would be considered by the Centre for Covid-19 Situation Administration (CCSA).