A market in Bang Phli district of Samut Prakan is closed on Saturday as the province tries to contain the surge of new Covid-19 cases. (Photo by Wichan Charoenkiatpakul)

The Centre for Covid-19 Situation Administration (CCSA) has declared stricter measures for 28 "red zone" provinces amid rising cases of the Covid-19 across the country while Bangkok has closed 25 types of businesses to contain the re-emerging spread of Covid-19.

Bangkok governor Aswin Kwanmuang signed an order on Friday to temporarily close types of businesses with gatherings of many people. The affected places are entertainment venues such as pubs, bars and similar places; water parks and amusement parks; playgrounds; places where children play at markets; and floating markets and flea markets.

Barbershops or hairdressers must limit service time per customer to two hours and not allow customers to wait in their shops.

Schools run by the BMA were ordered to close for two weeks.

In addition to the BMA's latest order is the setting up of 14 checkpoints on in-bound roads to screen people returning home from their holiday.

The checkpoints are on major roads connected to other provinces. These roads are used by inter-provincial buses returning to the capital from Chaeng Wattana, Vibhavadi Rangsit, Suwinthawong and Bang Na-Trat.

Bangkok is among the 28 provinces declared as a red zone by the CCSA. Other provinces include Tak, Nonthaburi, Pathum Thani, Ayutthaya, Saraburi and Lop Buri.

CCSA spokesman Taweesilp Visanuyothin said the CCSA and the Emergency Operation Centre (EOC) agreed on the stricter controls following a rise in local infections. The restrictions will be effective from tomorrow until Feb 1.

Apart from the rising number of cases, new infections were still detected among migrant workers with clusters in Bangkok spreading to many areas, Dr Taweesilp said.

The heightened restrictions, which will be proposed to Prime Minister Prayut Chan-o-cha for approval tomorrow, are divided into two tiers, Dr Taweesilp said.

The first tier limits the operating hours of businesses, closes at-risk ones, searches and arrests people who gather illegally, discourages inter-provincial travel, closes academic institutions, and encourages work from home across the red zones, he said. 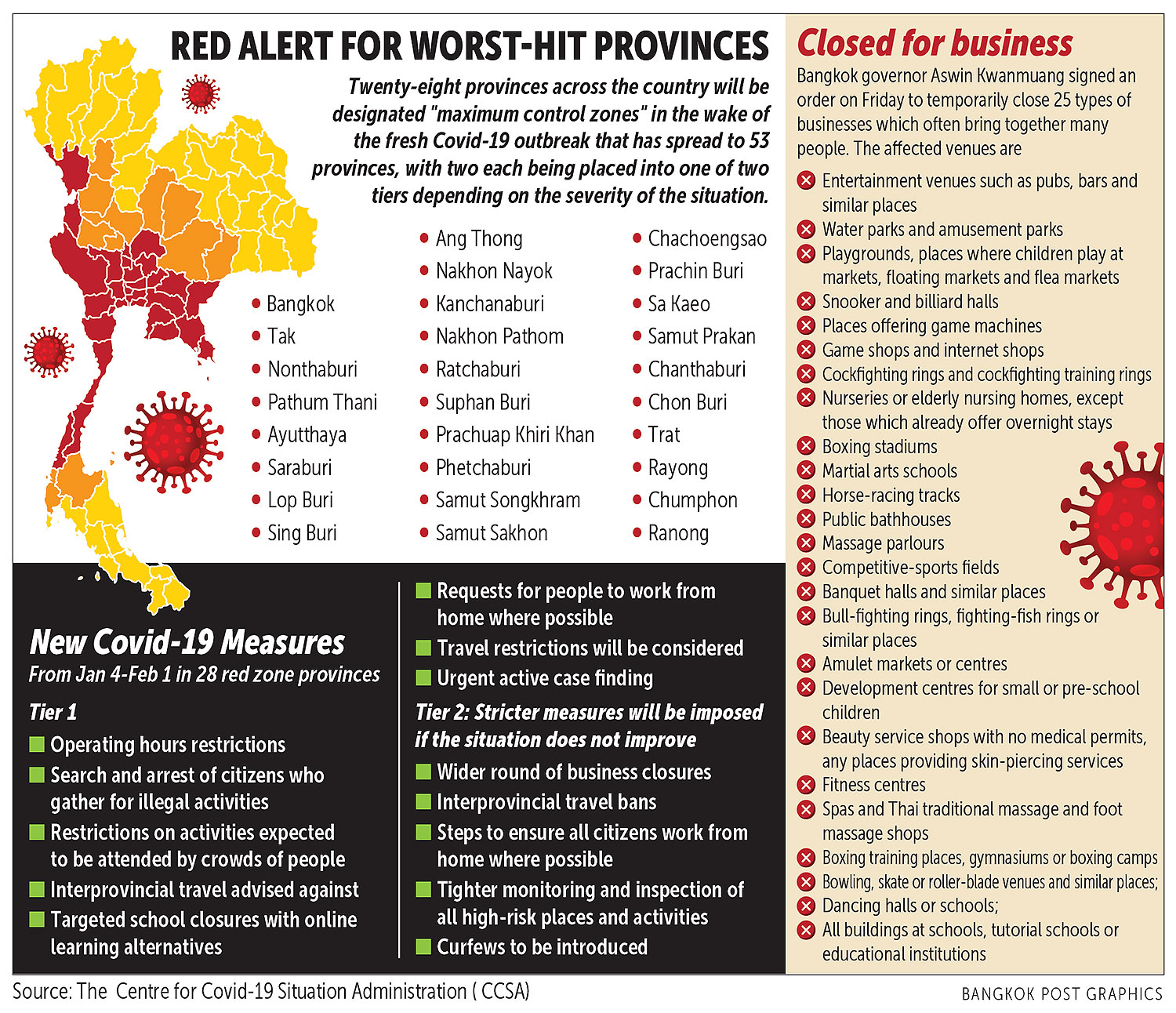 Other measures in the first tier include travel restrictions for people who come from the red zones, urgent active case finding and disease investigation.

If the first tier is unsuccessful in controlling the virus, second-tier measures will be introduced, Dr Taweesilp said.

In the second tier, the restriction on operating hours will be expanded to more businesses and some types of businesses will be closed. Gatherings of many people will be prohibited.

A curfew will be among second-tier measures. The curfew timeframe has not yet been established.

The CCSA spokesman insisted that dining in at restaurants is still allowed for now and there was no need to hoard goods at this stage.

If a dine-in ban was issued, the CCSA would ensure restaurants have time to prepare, he said.

The CCSA on Saturday reported 216 new cases with one more death, bringing the total to 7,379 cases and 64 fatalities. It said 214 were local infections.