Arrested gamblers arrive at a police station in Nakhon Sawan on Monday night after police raided a house in Banphot Phisai district. They had all come from neighbouring Pichit to try their luck. (Photo: Chalit Poomruang)

Health authorities have been successful in keeping migrant workers in Samut Sakhon in place as they battle to stop the spread of Covid-19, but are now wondering how best to stop gamblers moving around.

Gambling dens have been identified as a major factor in the spread of the novel coronavirus by the Centre of Covid-19 Situation Administration (CCSA).

Compulsive gamblers tend to move from one den to another. "This is their common behaviour," CCSA spokesman Taweesilp Visanuyothin said on Tuesday.

Health investigators tracking the outbreak at the Central Shrimp Market in Muang district of Samut Sakhon have so far identified at least 2,500 patients in 10 other provinces, all linked to the provincial hot spot.

That outbreak has been contained though, spreading only as far as Saraburi and Ratchaburi, with Bangkok having the second highest number of patients, according to CCSA figures.

The area in and around the shrimp market in tambon Mahachai has been locked down and Muang district is subject to a curfew, to prevent workers movng out of the most seriously infected places.

The attention is now on gambling infections.

Investigators tracking gamblers at dens in Rayong, where the first cases came to light on Dec 23, have been less successful, with only 144 detected infections. What worries them is gamblers' tendencies to move on to dens some distance away.

Infections linked to Rayong have been detected in 15 provinces so far, including nearby Chon Buri, Chanthaburi and Trat. The infected gamblers were found as far afield as Chiang Mai, Lampang, Amnat Charoen, Bangkok and Kanchanaburi, according to the CCSA.

They either returned home or sought out new places to gamble in the hope of recouping their losses, Dr Taweesilp said. 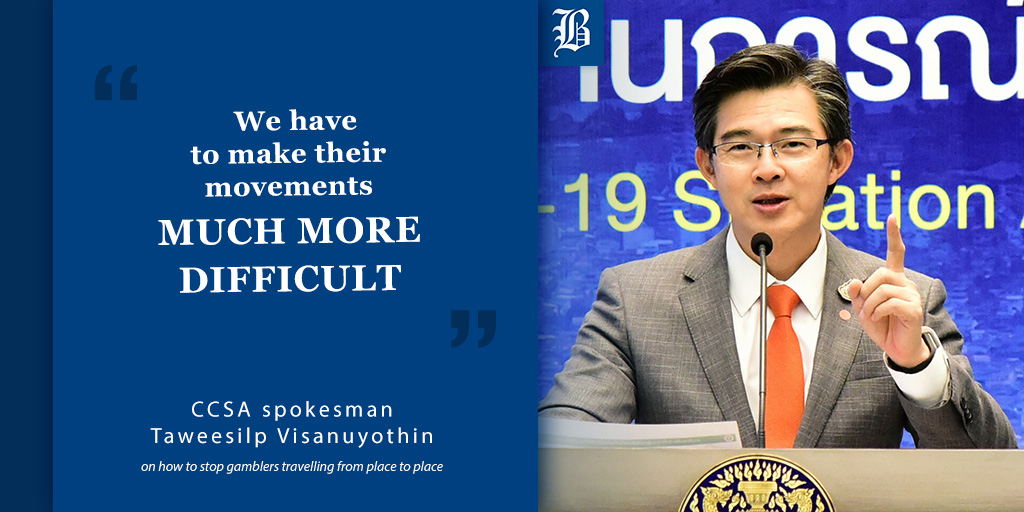 "Gamblers do not go to only one place. If they lose at one den, they will move on and bet in others," the spokesman said. And when they moved on they did not travel alone. They tended to move in groups.

Health and security officials have said the outbreak in Chon Buri, Chanthaburi and Trat was linked directly to the gambling fortune seekers in Rayong. The four provinces, plus Samut Sakhon, are under the most stringent measures, to hopefully tame the outbreak.

Rayong is not alone in the gambling spotlight. Officials also point to cock-fighting arenas in Ang Thong, Lop Buri, Singburi and Suphan Buri as having the potential to spread the virus to other areas. They have already found infections at these venues.

People working at gambling places are also at risk of infection, as was the case in Kanchanburi.

The provincial health office clearly said they worked at a gambling den in Bangkok.

However, Deputy Prime Minister Prawit Wongsuwon said on Monday there were no gambling dens in Bangkok. They had all been closed down by police according to Gen Prawit, who did not explain how he could be so certain.

Dr Taweesilp said the best way to stop gamblers travelling from place to place and possibly infecting other people was to make their trip an unpleasant one.

"We have to make their movements much more difficult," he said.