Only 'essential' travel allowed from now on

Food and Drug Administration and Royal Thai Police officers raid two warehouses in Nong Khaem district, Bangkok, on Wednesday after hearing they were being used to store used rubber gloves amid the coronavirus pandemic. Officers found 200 million baht worth of used gloves - some of which had already been washed and were ready to be resold - in the raid. An investigation is underway to find out who imported the gloves. (Photo: Pattarapong Chatpattarasill)

The government on Wednesday tightened Covid-19 control measures in the country's most at-risk provinces, with an emphasis on screening people leaving and entering them.

Samut Sakhon, Chon Buri, Rayong, Trat, and Chanthaburi, which had been among 28 provinces designated as maximum control zones, have now been renamed "maximum and strict control zones", according to the announcement in the Royal Gazette.

The new directives were issued by Prime Minister Prayut Chan-o-cha under the state of emergency imposed to curb the pandemic. 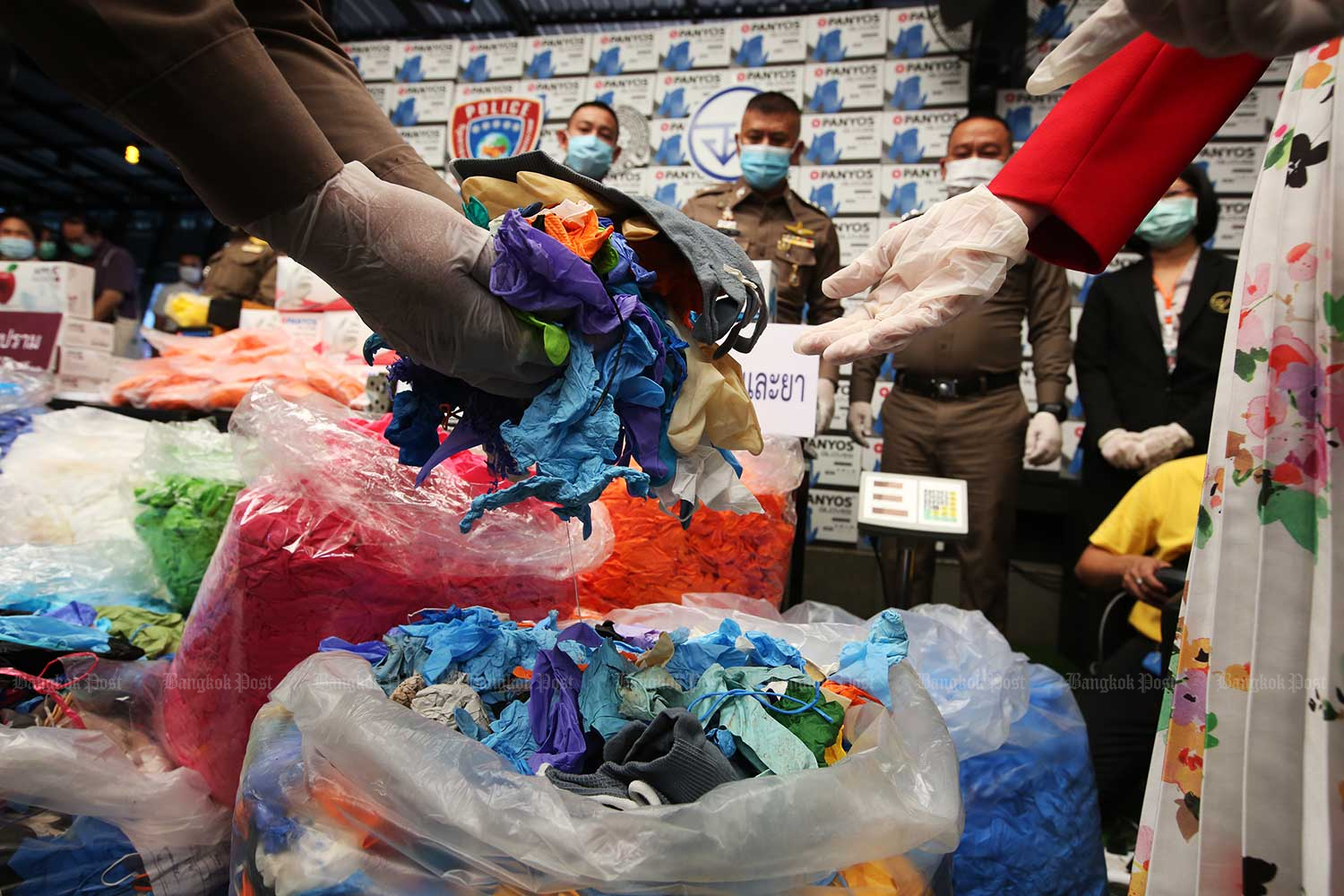 Disease control measures will be stepped up in those five newly-designated zones and residents must be equipped with the Mor Chana and Thai Chana contact tracing apps at all times.

Tougher travel restrictions will be imposed in the provinces, with authorities having the power to examine and control the use of transport routes and vehicles. More checkpoints will be set up to screen people entering and leaving the designated zones and those trying to do so must show it is absolutely necessary.

The government also vowed to take decisive action against state officials and anyone else involved in illegal labour smuggling, as well as officials who are negligent or complicit in allowing illegal gambling dens to operate, which has been blamed for new clusters of Covid-19 infections.

Offenders of the new directives will be liable to a jail term of up to two years and/or a fine of up to 40,000 baht.

Those who intentionally conceal travel information or give false information will also face legal action under the Communicable Disease Act.

Sophon Iamsirithaworn, director of the Communicable Diseases Division under the Department of Disease Control (DDC), said new infections were expected to rise over the next two weeks.

These were mostly linked to Samut Sakhon, the epicentre of the new outbreak, gambling dens in Rayong, cockfighting rings in Ang Thong and several entertainment venues in the Pin Klao area of Bangkok.

"In light of this, it is necessary to step up disease control measures to stem the spread of the disease,'' Dr Sophon said.

DDC director-general Opas Karnka­winpong said the new outbreak had now spread to 56 provinces, with most in Samut Sakhon, Bangkok and the eastern provinces.

"Overall, even though the number of patients continues to rise, [it is] at a slow rate," he said. "But we must not be careless and contact tracing will continue."

Finance Ministry spokeswoman Kulaya Tantitemit denied reports the government was not doing enough to help those affected by its temporary business closure orders.

She said the government attached great importance to both the economy and public health, and had a 139-billion-baht fund reserved for emergencies under the 2021 fiscal budget to help ease the plight of affected people.

She also said the remaining funds under the 1-trillion-baht loan decree -- worth about 470 billion baht -- was sufficient to cope with the impacts of the outbreak, while the state enterprise investment budget of 290 billion baht would also be enough to steer the economy.

His order also banned visitors to Koh Si Chang, off the Si Racha coast, until Jan 19, and ordered the district chief to strictly screen anyone going to and from the island. Mr Pakkathorn said that was aimed at urgently controlling the spike of new infections in the province.

The U-tapao international airport Facebook page on Wednesday announced it was closed to all flights and would not reopen until the situation improved.