App important, but travel docs will do

People operate heavy machinery to clear and drill during the construction of a field hospital at the 100-rai Watthana Factory project site in Samut Sakhon, an epicentre of the new wave of Covid-19 infections. The field hospital, costing five billion baht to build, will be equipped with 1,000 beds for Covid-19 patients.

Prime Minister Prayut Chan-o-cha on Thursday urged people to download onto their smartphone a Covid-19 contact-tracing app called "Mor Chana". However, there would be no punishments for those who do not download it, so long as they inform officials of their travel plans when crossing provincial borders.

His remark came on Thursday afternoon after an announcement made by Taweesilp Visanuyothin, the Centre for Covid-19 Situation Administration (CCSA) spokesman. He said use of the app would be mandatory in the declared maximum-control zones, a statement that was strongly opposed by some critics and sparked uproar online.

Many pointed towards the fact that there are many Thais who still don't have access to a smartphone and would be unable to download the app.

The CCSA spokesman earlier told a daily press briefing on the Covid-19 situation that people would have to install the Mor Chana app onto their mobile phones and use it together with Thai Chana, an app used for checking into and out of public places. 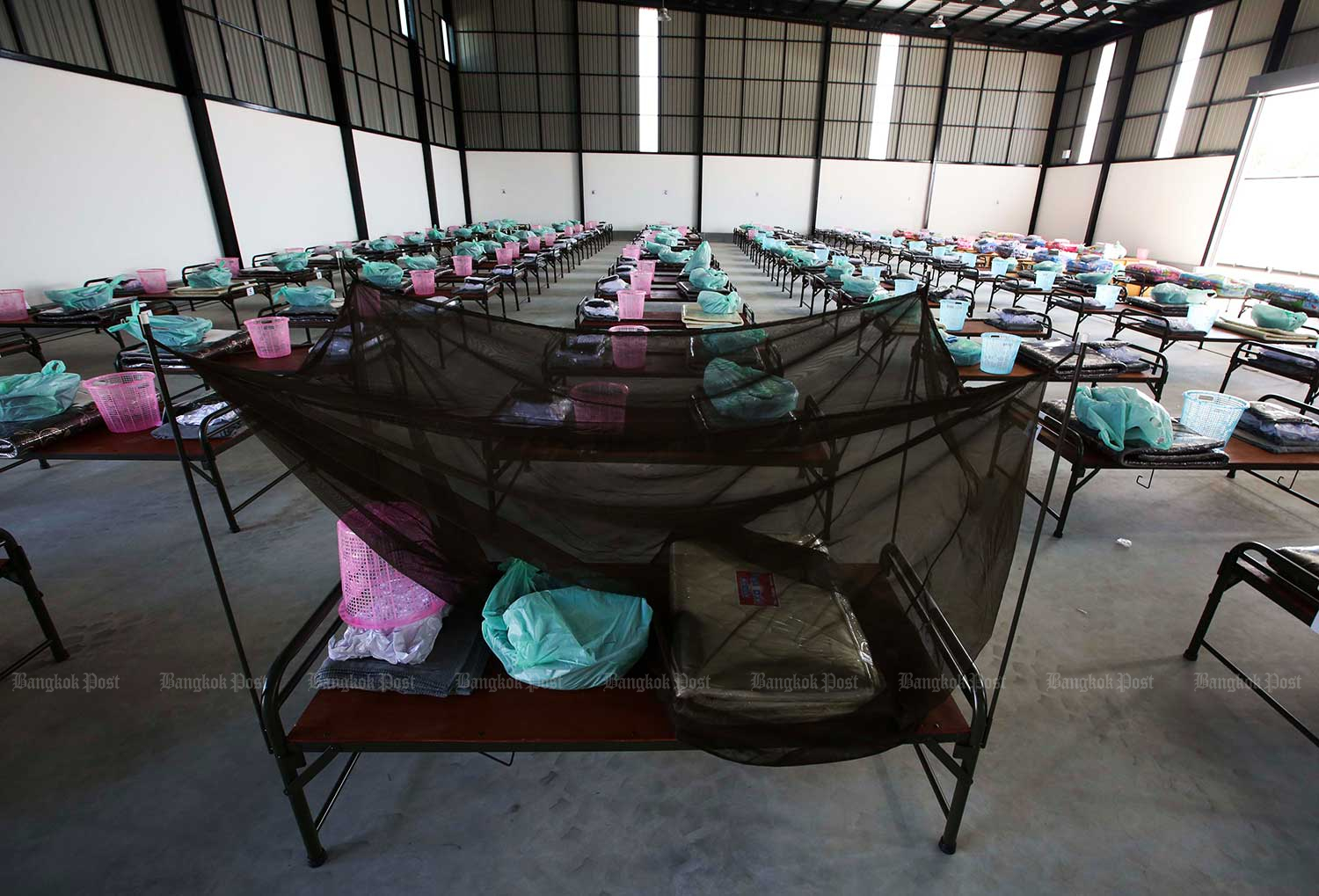 Beds placed in two warehouses pending the construction of the field hospital at the Watthana Factory project site. The first 200 patients will be admitted today. (Photos by Pattarapong Chatpattarasill)

This mandate was meant to strictly apply to people residing in areas declared maximum-control zones who might otherwise be liable to a jail term of up to two years and/or a fine of up to 40,000 baht if found violating the directive, he said.

"Anyone who is infected with Covid-19 and fails to have downloaded the Mor Chana app will be regarded as having intentionally defied the directive and may face up to two years in prison and a maximum fine of 40,000 baht, not to mention more punishments for covering up their travel history," he said.

For the five provinces in the "maximum and strict control zones," namely Rayong, Chon Buri, Trat, Chanthaburi and Samut Sakhon, travellers leaving those provinces will need travel permits issued by their local leaders identifying the need to travel and their itinerary.

Deputy Prime Minister and Public Health Minister Anutin Charnvirakul later on Thursday responded to growing public frustrations over the Mor Chana app mandate announced on Thursday morning, saying in a Facebook post he had already convinced the PM that the mandate would be a burden to many people.

He was prepared to ameliorate the government's stance.

"The PM has agreed with my explanation and will amend the order (requiring all people to have the Mor Chana app on their smartphones) and allow the use of paper-based [Covid-19 contact-tracing] instead," said Mr Anutin.

Government spokesman Anucha Burapachaisri said anyone who feels uncomfortable with using the Mor Chana app may instead record his or her travel history and submit his or her travel itinerary at a Covid-19 checkpoint when travelling.

However, if that person is later proved to have covered up his or her travel information intentionally in a situation that may cause a new spread of Covid-19, the person will be held responsible for such actions, said the spokesman.

Dr Taweesilp said he relayed the CCSA's announcement of the Mor Chana app mandate as he intended it to be a call for public cooperation to stem the spread of Covid-19 via use of the mobile app.

It's been almost a month since the first new Covid-19 case was reported in this new wave of the pandemic and although the curve of new infections detected isn't very steep, the situation is still worrying, which justified the use of this control measure along with other key measures, he said.

Other measures include declaring Samut Sakhon, Chon Buri, Rayong, Chanthaburi and Trat as Covid-19 maximum control zones and cracking down on the illegal smuggling of migrants and illegal gambling houses, he said.

Gen Prayut and Mr Anutin have also agreed on a proposal for every province to set up its own field hospital for treating Covid-19 infected patients so they would not have to be transferred to another province, said Dr Taweesilp.

As soon as the Mor Chana app directive was announced by Dr Taweesilp on Thursday, it sparked strong criticism, which was regarded by some critics as a violation of people's rights.

Ponson Liengboonlertchai, a law lecturer at Chulalongkorn University, said compulsion could be against the constitution as it would result in a burden on the public and would severely limit their rights and freedom, an act prohibited under Section 26 of the charter.

Mr Anucha also assured the government now has the ability to pool budgetary resources of up to two trillion baht to fund its new Covid relief measures.