Lines at local offices as new curb kicks in

Emotions ran high at a number of district offices, where residents of eastern provinces which had been declared maximum and strict Covid-19 control areas were seen queuing for hours to get a permit to travel.

Within the first hour of opening, the district office at Rayong's Muang district saw more than 100 people stream in to apply for travel permits. As the day progressed, the sheer number of applicants forced authorities to move the dedicated booth to a meeting hall which offered more space.

"The movement restriction came out of the blue. All of a sudden, everyone has to get in line to get a piece of paper to leave the province," said Sorot Chamchuen, 69, a vegetable trader based in Rayong, who routinely picks up produce from the distribution centre at Talad Thai market in Pathum Thani.

"We're afraid of breaking the law, on top of our fears of contracting Covid-19." 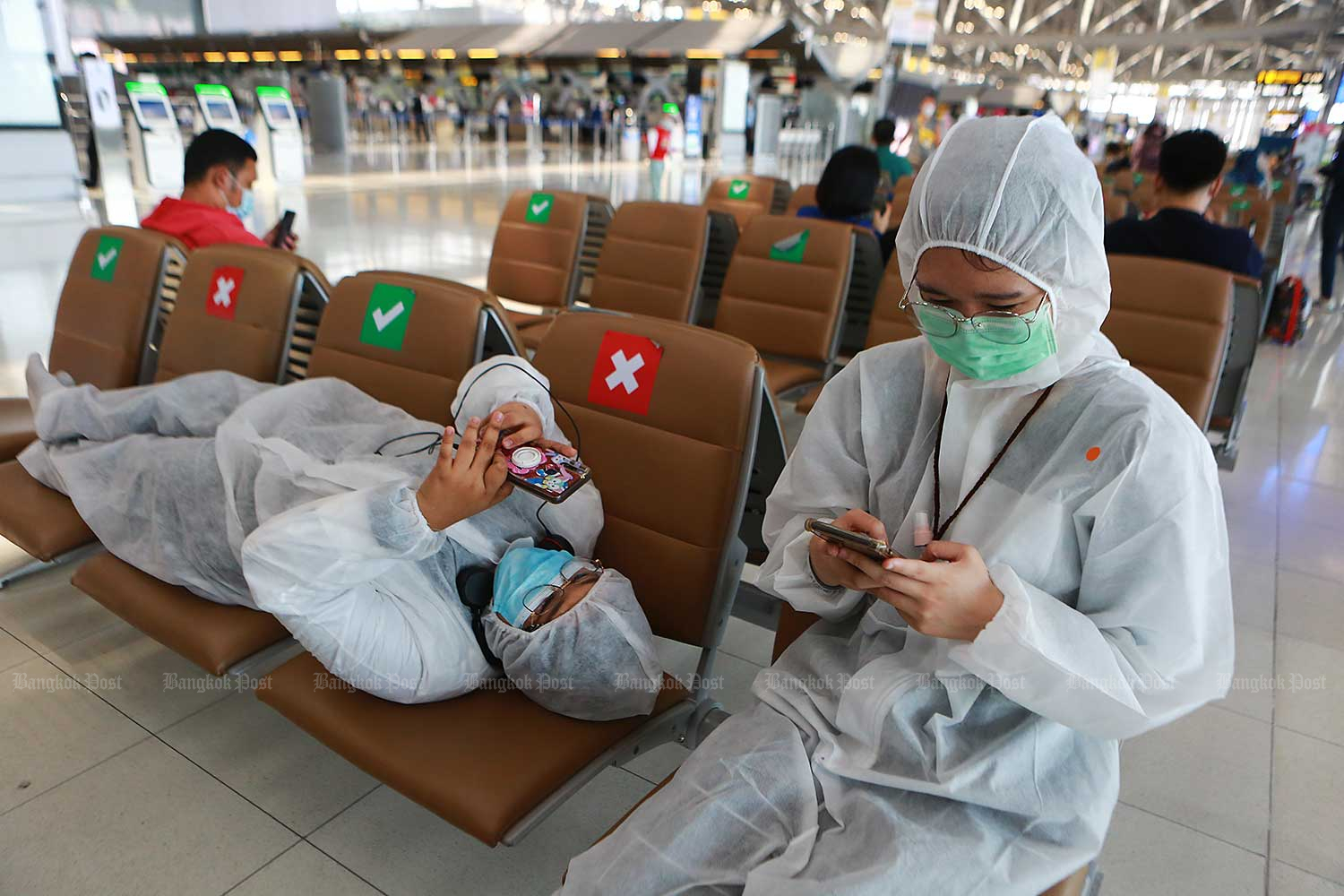 Two people in full protective outfits fiddle with their phones as they wait to catch flights out of Suvarnabhumi airport yesterday. Many provinces have imposed travel restrictions in the wake of the fresh Covid-19 outbreak. (Photo by Somchai Poomlard)

A Rayong-based shrimp vendor, who asked not to be named, said, "Before the authorities announce a regulation that must be followed, they need to think of the people and give them enough time to prepare first."

She said that even officials seemed ill-prepared to enforce the new restrictions, which were recently published in the Royal Gazette and put into immediate effect.

The new restriction, which applies to Chon Buri, Chanthaburi, Rayong, Samut Sakhon and Trat, requires those seeking to travel outside their home provinces to secure a permit from their local district office.

All of the provinces affected by the movement curbs are on the eastern seaboard, with the exception of Samut Sakhon.

Until the curb is lifted, residents of those provinces are only allowed to travel to other regions for essential and/or emergency purposes. In order to secure a permit, applicants must produce their national identity cards, along with other documents to vouch for the trip.

The rule has come under criticism from affected residents, as the permits are only valid for one day only. Those who are caught travelling outside their home provinces may face jail time, a fine, or both.

Just like in Rayong, the Muang district office in Chon Buri was packed with people seeking to get a travel permit, and very few people maintained social distancing, it was observed.

Prakasit Sueksongkram, assistant chief of Muang district office, said the office has opened a dedicated booth to process the permit applications, adding the booth operates around the clock. Despite that, a permit seeker who declined to be named, told the Bangkok Post that he had yet to receive his permit despite having queued for 2.5 hours since 6am.

The man, a hired hand based in Chon Buri who needed to commute to work in Samut Prakan, said the requirement is impractical. "It's troublesome. But it's the rule," he said.

Officers at the booth said it was up to the governor and district chiefs to decide if issuing a weekly pass for the sake of convenience would be worth the infection risk.

Similarly packed scenes could be seen at other district offices in other provinces.

In Trat, Jutarat Chumsawasdi, assistant chief of Khao Saming district, was present at the permit-issuing booth to sign the permits and speed up the process.

She said while more than 200 people sought to apply for travel permits on Thursday, many did not understand the application steps, which needed explaining.

Udomsilp Jamkham, a Trat resident, said he delivers goods every day to Si Sa Ket. He said he is planning to ask for several passes in advance.