Officials spray disinfectant in a community in Klong Toey area on Saturday. (Photo by Somchai Poomlard)

People who can issue the permits required to enter and leave the five provinces with heavy Covid-19 infections have been spelt out by a Centre for Covid-19 Situation Administration (CCSA) panel.

The panel on Saturday identified the permit issuers in the five provinces -- Samut Sakhon, Chon Buri, Rayong, Chanthaburi and Trat.

Chaos descended on many district offices in the five provinces last week as people, most of them making a living on inter-provincial goods trade, clambered to apply for the permits.

The district offices were the only places authorised to issue the permits. 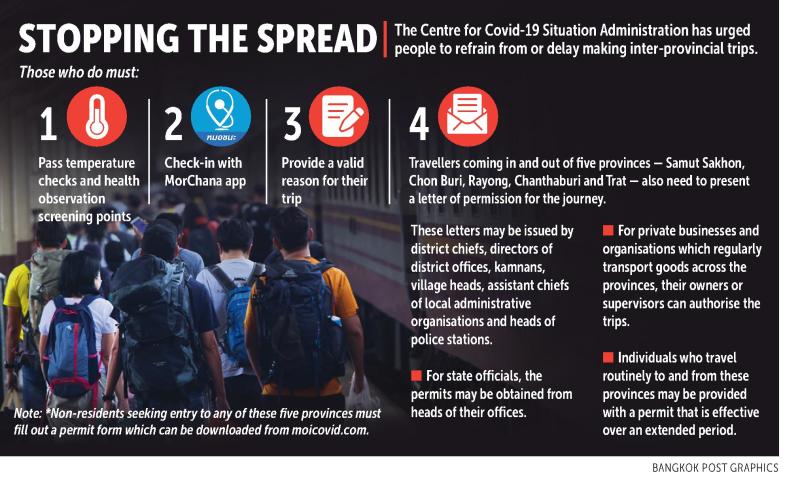 On Saturday, the CCSA spokesman Taweesilp Visanuyothin said the panel agreed to expand the range of places from which permits can be obtained.

For the public, the papers may be released by district chiefs, directors of district offices, kamnans, village heads, assistant chiefs of local administrative organisations and heads of police stations.

For state officials, the permits may be secured from heads of their offices.

For private businesses and organisations which regularly transport goods across the provinces, their owners or supervisors have the authority to issue the permits.

Individuals who travel routinely to the provinces and back may be provided with a permit that is effective over an extended period.

Dr Taweesilp added non-residents seeking to enter the provinces must fill out a permit form which can be downloaded at www.moicovid.com.

The CCSA panel also approved measures to be enforced on people travelling in and out of the five provinces. They are to be subject to temperature checks and their health observed.

They will also be asked to download the Mor Chana position-tracking application on their mobile phones, and give reasons for their travel when they submit the permit for inspection.

Dr Taweesilp, however, insisted the permit is not mandatory in the other 72 provinces.

"Overall though, people are encouraged to delay their travel between provinces at least until the end of the month or until the situation improves in a bid to curb the transmission of the virus," Dr Taweesilp said.

Meanwhile, measures to enhance public health security, including the MorvChana app, have been announced for immediate effect in the Royal Gazette.

Dr Taweesilp said 1.68 million people have downloaded the MorChana app which alerts people who have been in close proximity to those infected with Covid-19.

He said the app has alerted a total of 112 people who had been to areas which Covid-19 infected individuals were visiting at the time in Bangkok on Dec 31 and Jan 4.

The alert includes a suggested self-quarantine for the mobile phone user and Covid-19 symptoms to be on alert for.

His announcement says strict health screening measures be put in place or practised by businesses operators, customers, travellers and the public.

One measure says the Mor Chana app is to be used, where possible in conjunction with the Thai Chana tracking app, which was launched for checking in and out of public places after the first outbreak of the virus last year.