Seven arrested as activists and police face off
Thailand
General

Seven arrested as activists and police face off

Protesters give the three-finger salute at a demonstration against the royal defamation lese majeste law at Victory Monument in Bangkok on Saturday. (AFP photo)

Four people also suffered minor injuries following a small explosion outside Chamchuri Square on Rama IV Road, not long after demonstrators started leaving nearby Samyan Mitrtown, where they had rallied after being dispersed from Victory Monument. It is not known if the blast was related to the protests.

The day began when a few dozen people calling themselves Free Guards gathered at the Phyathai island near Victory Monument at noon. They unfurled three blank 112-metre banners — a reference to the lese majeste section of the Criminal Code — and invited people to share their thoughts about the government and the royal defamation law.

Several passers-by took up the offer and wrote on the banners before police reached the scene, backed by a fully equipped mob-control team who encircled the outer area.

Among the messages to the government were: “Thai education needs to be improved”, “Stop harassing people”, “A failed government, a divisive society” and “Covid-19 is an excuse”.

More than 40 activists, most of them young, have been charged with lese majeste since mid-November, when Prime Minister Prayut Chan-o-cha said “all laws” would be used to deal with the increasingly vocal protest movement. Prior to that there had been no charges laid under Article 112 for more than two years.

The police warned the demonstrators at Victory Monument that their activity was in violation of the Covid-19 emergency decree, with penalties up to two years in prison and/or a fine of up to 40,000 baht. It also broke the Disease Control Act with one year in jail and a fine of up to 100,000 baht, they said.

They later started arresting people and seized the banners. A scuffle ensued as some resisted by hurling abuse at the officers and lying on the ground. Some were heard asking them why they did not raid gambling dens nearby instead.

Police gave them five minutes to clear the area.

Deputy police spokesman Pol Col Kissana Phathanacharoen later arrived at the scene. He ordered the police to back down and ask people to go home.

At least two people were reportedly taken away. They were believed to have been taken to the Border Patrol Police Region 1 headquarters in Pathum Thani, where many dissidents have been held for questioning in the past.

The Free Guards group later went to the Phayathai police station to demand the release of those being held, but police closed off the area and told them to leave. They complied but decided to assemble again at 3.30pm in front of Samyan Mitrtown in the Pathumwan area.

At the shopping centre, they repeated their demand for the release of the protesters who had been held. Police told them to leave at 4.30pm.

After they left at around 5pm. A blast was heard in front of the mall, slightly wounding two people.

One man sustained cuts from shrapnel in his palm while a reporter from The Standard online news outlet was hurt in the calf. Police later said two officers also sustained minor injuries.

At least five more people were arrested and officers reportedly took their mobile phones, according to Thai Lawyers for Human Rights.

Also on Saturday afternoon, Bad Students, a group of teenaged campaigners for educational reform, held a symbolic demonstration to mark Teachers' Day, gathering in front of the Education Ministry on Ratchadamnoen Avenue.

Before the activity began, police told their leaders that while they would not be prosecuted because they were minors, properly wore masks and kept distancing, they urged them to drop their plan for fear of the Covid-19 spread.

The students bargained with the police, who finally allowed them to hold the activity for 15 minutes, which they broadcast live on Facebook.

The activity involved presenting "gifts" to teachers — canes, scissors and rulers — in front of the ministry’s nameplate, with the sign “The Third Kindness … Beautiful and Fresh”.

The Third Kindness is the name of a song encouraging young people to feel grateful for their teachers. The first kindness is said to be the Triple Gem of Buddhism (Buddha, dhamma and sangha) and the second is parents. All three are what everyone should feel grateful for and pay respect to all their lives.

The students also poured red paint that looked like blood on themselves, signifying how they have been treated by the Thai educational system, before dispersing. 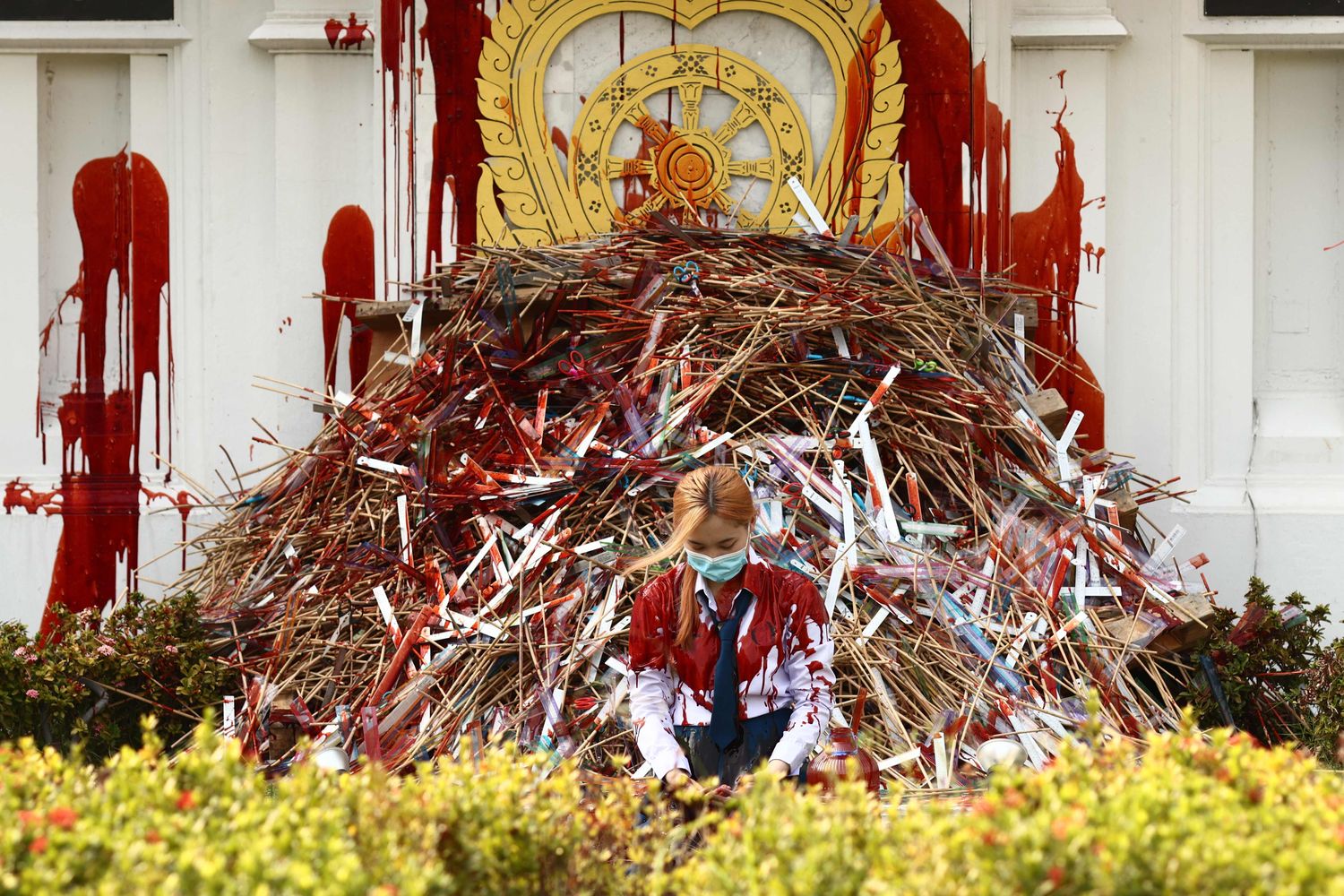 A protester kneels in front of a heap of stationery and bamboo canes during a "Bad Student" demonstration outside the Ministry of Education in Bangkok on Saturday. (AFP photo)