Private firm staff may get help at long last

Labour activists gather at Government House in Bangkok on Tuesday to seek financial aid for workers in the Social Security system. (Photo by Chanat Katanyu)

A 4,000-baht financial relief package could be approved soon for employees under the social security system who have had to bear the brunt of the Covid-19 pandemic, according to Labour Minister Suchart Chomklin.

The aid to be disbursed for one month is expected to be put to the cabinet for consideration and given the green light as soon as possible, the minister said.

The beneficiaries are 11 million employees of private firms who are covered by Section 33 of the Social Security Act (SSA).

Those under Section 33 have been left out of the government's Covid-19 relief packages since the pandemic hit the country early last year.

Mr Suchart said the aid was an initiative by Prime Minister Prayut Chan-o-cha who is concerned about the welfare of workers and employees whose companies have been battered by the Covid-19 crisis for months. Many have furloughed workers, effectively cutting their pay. 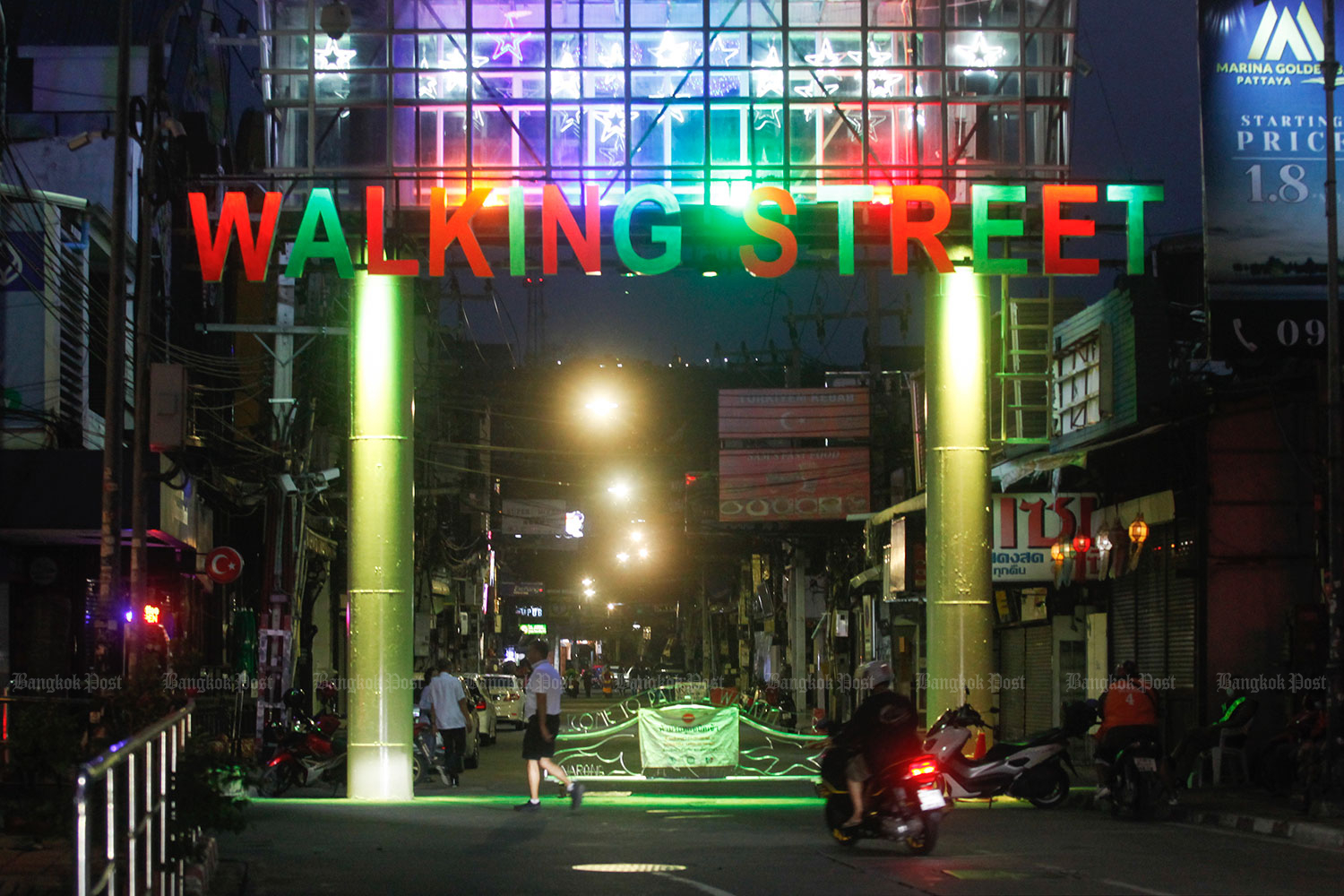 Hard times: A new sign lights up the entrance to Walking Street in Pattaya where business has ground to a halt since the Covid-19 pandemic drove away foreign tourists. Many entertainment and retail outlets on the street are closed, several of them permanently, while others were renting out their premises to keep themselves afloat. (Photo by Nutthawat Wicheanbut)

Mr Suchart said Gen Prayut has instructed the Labour Ministry to consult the Finance Ministry on ways to provide remedial assistance in the form of financial relief to affected employees.

To qualify to receive the aid, an employee must be a Thai national with bank deposits not exceeding 500,000 baht.

The 4,000-baht handout will be provided for one month and the scheme is expected to cost about 40 billion baht, to be tapped from the 1-trillion-baht emergency loan, according to the minister.

Mr Suchart said the National Economic and Social Development Council (NESDC), the government's strategic planning agency, will be consulted on the disbursement of the relief loan to finance the scheme.

He added the consultations will likely be concluded this week before the scheme is forwarded to the cabinet for approval at the earliest opportunity.

"Everyone is feeling the effect of the crisis. The Labour Ministry understands this and is trying to help the workforce in the social security system," he said.

He was responding to complaints from many quarters that workers and employees in the private sector were good taxpayers but had been left out of various relief programmes even though they were facing financial dire straits as a result of the pandemic.

Mr Suchart denied the Labour Ministry has turned a blind eye to the plight of the private-sector workers and employees. He insisted the government has subsidised the Social Security Fund (SSF) to the tune of 40 billion baht a year.

The subsidies were included in the unemployment and elderly pension funds in the SSF.

Such subsidies amount to 2.75% of the SSF's money, he said. However, a previous administration had failed to pay, forcing the current government to inject funds to help with liquidity.

Therefore, the Labour Ministry and the NESDC will have to discuss the use of funds from the 390-billion-baht budget designated for economic rehabilitation under the 1-trillion-baht emergency loan decree, Ms Kulaya said, adding the issue is expected to be raised at a cabinet meeting next week.

However, she said workers who are covered by Section 33 also include about 1.1 million state welfare card holders, as well as migrant workers.

It remains to be seen how the Labour Ministry will set the criteria for the payment of the financial aid, she said.

Nonetheless, labour activists declined to comment on the proposed financial assistance, saying they will wait for a cabinet resolution on the matter.

The proposed aid was also met with a lukewarm response from workers.

Surin Phimpa, a worker in Samut Sakhon's Omnoi municipality, said the aid would be given for only one month, which is not enough.

She said the aid was obviously intended to deflect criticism that the government did not pay attention to employees insured under the social security law.