Hundreds rally outside Parliament against government

Protesters listen to a speaker on a stage in front of pictures of nine ministers being grilled in and outside Parliament on Friday. (Photo by Pattarapong​ Chatpattarasill)

Hundreds of demonstrators converged outside Parliament on Friday evening to voice their criticisms of the government as the no-confidence debate entered its final hours.

The rally called by the Mob Fest Facebook group was intended to expose the failures of the government, while opposition lawmakers were grilling Prime Minister Prayut Chan-o-cha and nine other cabinet members.

Thanaporn Wijan, a representative of the Labour Network for People’s Rights, attacked the government for failing to solve the job crisis brought on by the pandemic, which has left hundreds of thousands of people, from pilots to factory workers, unemployed.

A bigger rally is expected on Saturday as demonstrators step up the pressure for the release of four activists — Arnon Nampa, Parit Chiwarak, Somyot Prueksakasemsuk and Patiwat Saraiyaem — who are detained at Bangkok Remand Prison pending their trials for lese majeste and other charges.

Some opposition lawmakers from Move Forward Party also joined the gathering on Friday.

“The number of voices out here are more than those in the parliament, so the government has to listen to us,” Tanaporn Wijan, one of the speakers, said from a stage set up on a truck bed.

“If you don’t listen, more people will come out to demand the government’s resignation. We don’t have confidence in the government.”

Police have said that about 10,000 officers would be deployed as needed for the rallies on Friday and Saturday.

The atmosphere on Friday evening was calm, in contrast to last Saturday, when violence flared between police and a small group of protesters after the majority had dispersed earlier.

Pro-monarchy activists, meanwhile, on Friday called off a rally they had planned for Saturday to counter the anti-government groups, saying they wanted to avoid confrontations.

The no-confidence debate was expected to end around midnight Friday, with votes on individual ministers to take place starting on Saturday morning. 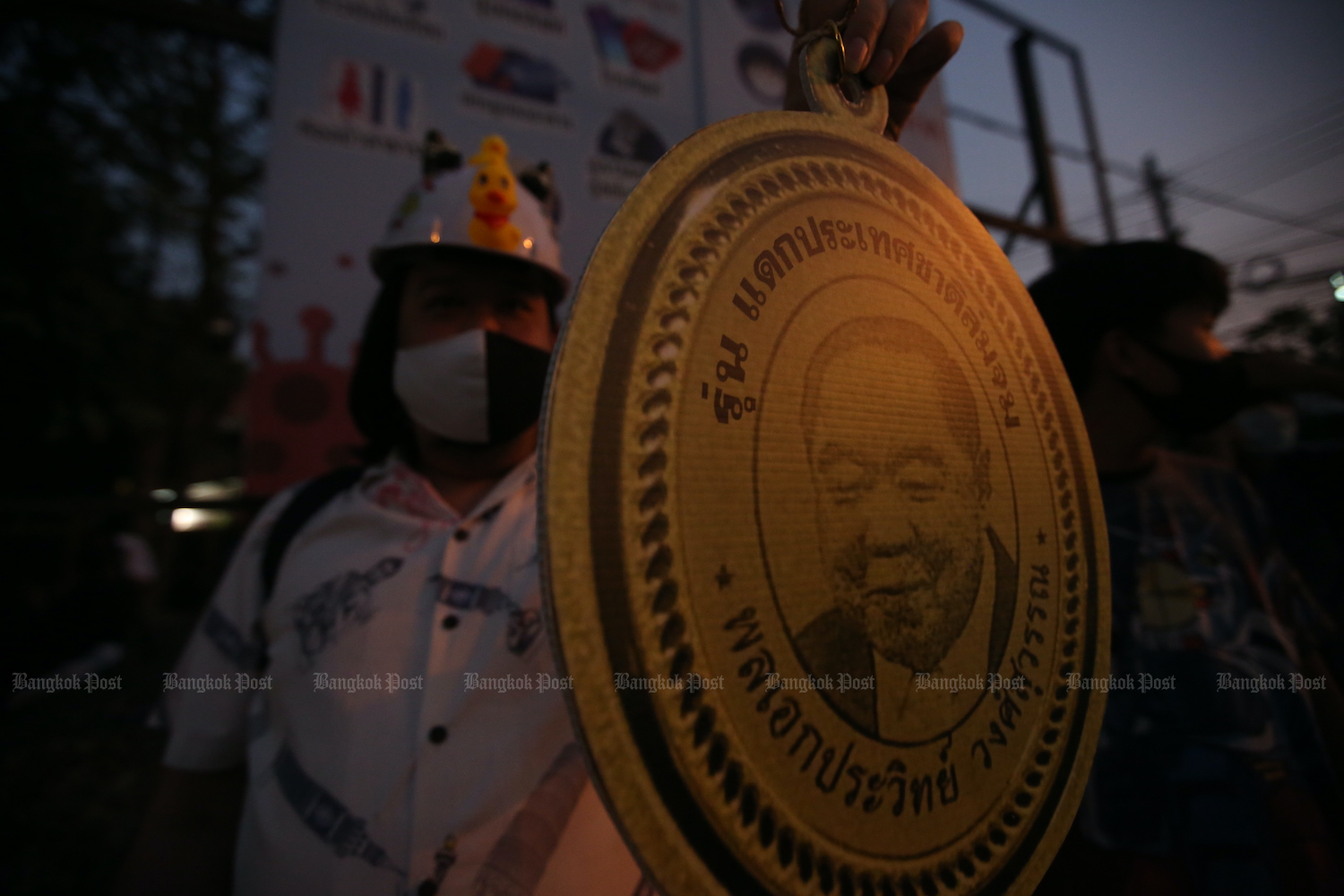 A demonstrator at Friday’s rally holds a giant mock-up of a medallion that Palang Pracharath MP Sira Jenjaka showed off earlier in the week. The MP said the medallion, bearing the image of party leader and Deputy PM Prawit Wongsuwon, would bring him good luck. (Photo by Pattarapong​ Chatpattarasill)