Warning signs at a screening point at a market in Bangkok's Bang Khae district urge visitors to wear masks after a new cluster of infections was detected in the area.

The Department of Disease Control (DDC) on Sunday said a new cluster of Covid-19 infections in Bang Khae district will not become a new wave of the coronavirus outbreak.

The Bangkok Metropolitan Administration (BMA) had conducted proactive testing of 4,046 people in several markets in Bang Khae between March 7-13. Of them, 96 tested positive for Covid-19, and the rest were awaiting the results.

As for details of the mass testing, the 96 cases were detected from among the 2,335 people tested at Wonder Market. It said 764 of them tested negative and the results of the rest are pending.

DDC director-general Opas Karnkawinpong  said the new cluster was found at markets in Bang Khae because the markets are located close to each other, covering a large area, with at least 1,000 people constantly moving in and out.

Some of the markets have low ceilings with poor ventilation, Dr Opas said, adding that most vendors were Thai while their employees were migrant workers.

"Even though vendors wore masks, they still kept them below their noses which defeated the intended purpose. Failing to wear masks properly will heighten the risk of infection,'' Dr Opas said.

The infected people from markets in Bang Khae comprised vendors and their employees and they have been sent to hospital. However, there had been no reports of customers being infected, he said.

Dr Opas also said health officials in Suphan Buri, Nakhon Pathom, Phetchaburi and Samut Sakhon had been instructed to closely monitor 15 people who visited the markets in Bang Kae after the department had sent names and personal details to them.

According to the department, five were from Suphan Buri, three from Nakhon Pathom, six from Phetchaburi and one from Samut Sakhon. 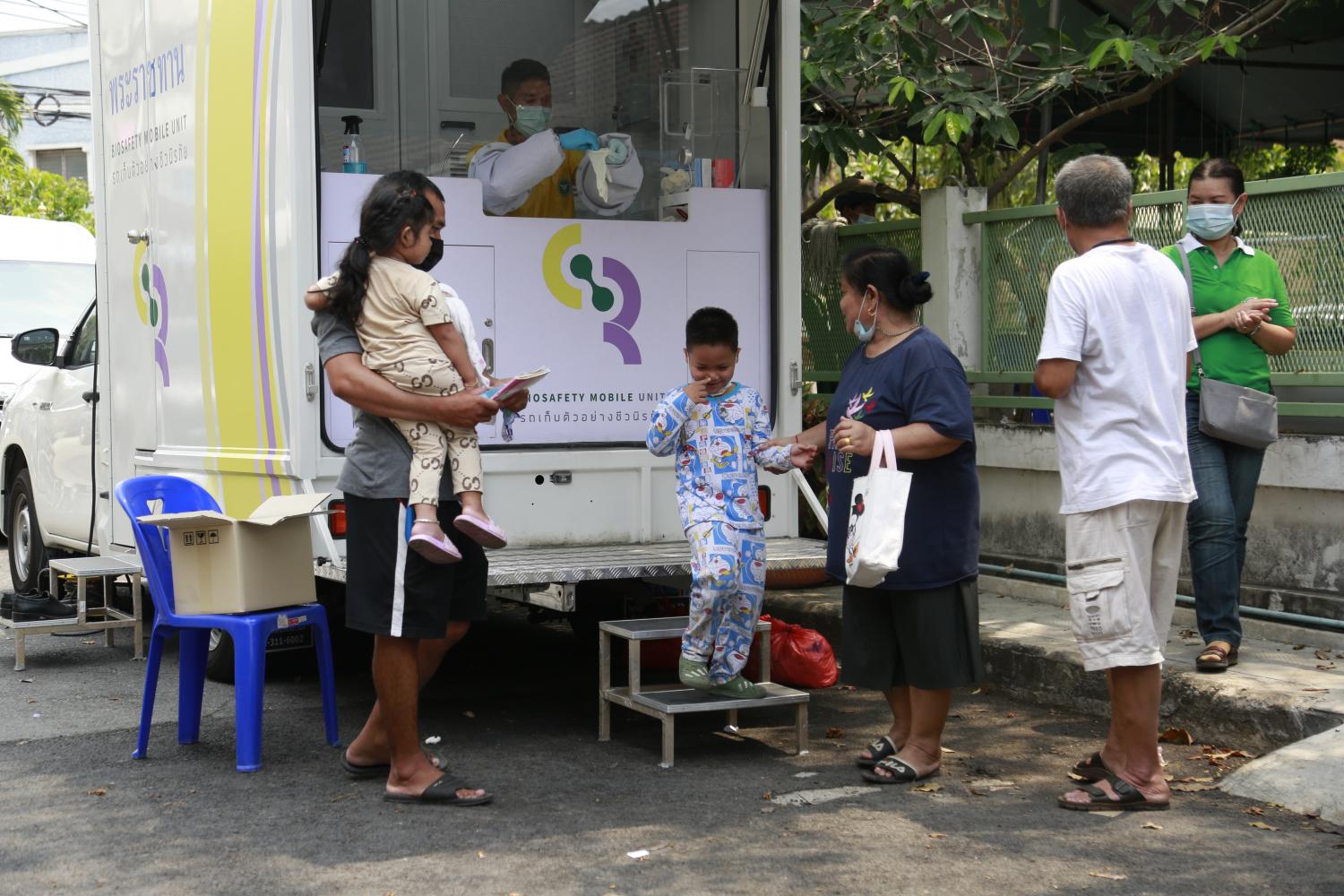 Residents sign up for Covid-19 tests at a mobile testing unit in Bangkok's Nong Khaem district, which is near the markets in Bang Khae district where new infections were found. photos by Arnun Chonmahatrakool

However, Suphan Buri governor Natthapat Suwanprateep later said that five vendors in the province who visited markets in Bang Khae tested positive for Covid-19 and all were sent to hospital. Disease control officials were sent to investigate those who had come into contact with the vendors.

Dr Opas said the new cluster had showed no sign of becoming a widespread infection or a new wave given that the markets in the area were not wholesale markets and the movement of people was easy to control.

"This is a new cluster, but not a new wave of an outbreak. New cases have been found constantly, though the number is still small. However, with cooperation from market operators, vendors and the public, the situation will be brought under control shortly as in the case of Pornpat Market in Pathum Thani which has now reopened,'' Dr Opas said.

He said Deputy Prime Minister and Public Health Minister Anutin Charnvirakul visited vendors in Bang Khae yesterday, and few were too concerned about the situation. However, those who had shopped at those markets during the past 10 days and had developed some symptoms such as losing their sense of smell and taste can have free medical checks at any hospital nearby, Dr Opas said.

Bang Khae is the third market to become a Covid-19 hotspot following the outbreaks at Pornpat in Pathum Thani last month and Samut Sakhon in December. The outbreak at Pornpat market originated in Samut Sakhon but the source of the infections at Bang Khae remains unclear.

Mr Anutin said yesterday another 800,000 doses of Sinovac vaccine will arrive in Thailand this month, and another 1 million doses in April. He added the government was in talks with the producer to buy another 5 million doses. As for vaccines from AstraZeneca, they will be administered to priority groups from June onwards. "From now until the end of the year, there will be no shortages of vaccines,'' the minister said.

The Centre for Covid-19 Situation Administration (CCSA) yesterday reported 170 new cases of the novel coronavirus, more than half of them in Bangkok, as the accumulated total in Thailand since the start of the pandemic reached 26,927. The death toll remained at 86.

The country had 14 imported cases, three of them from Malaysia.