State quarantine for both Thai and foreign arrivals will be shortened to 10 days from 14 starting April 1, as part of the government's ambitious plan to reopen the country from Oct 1. 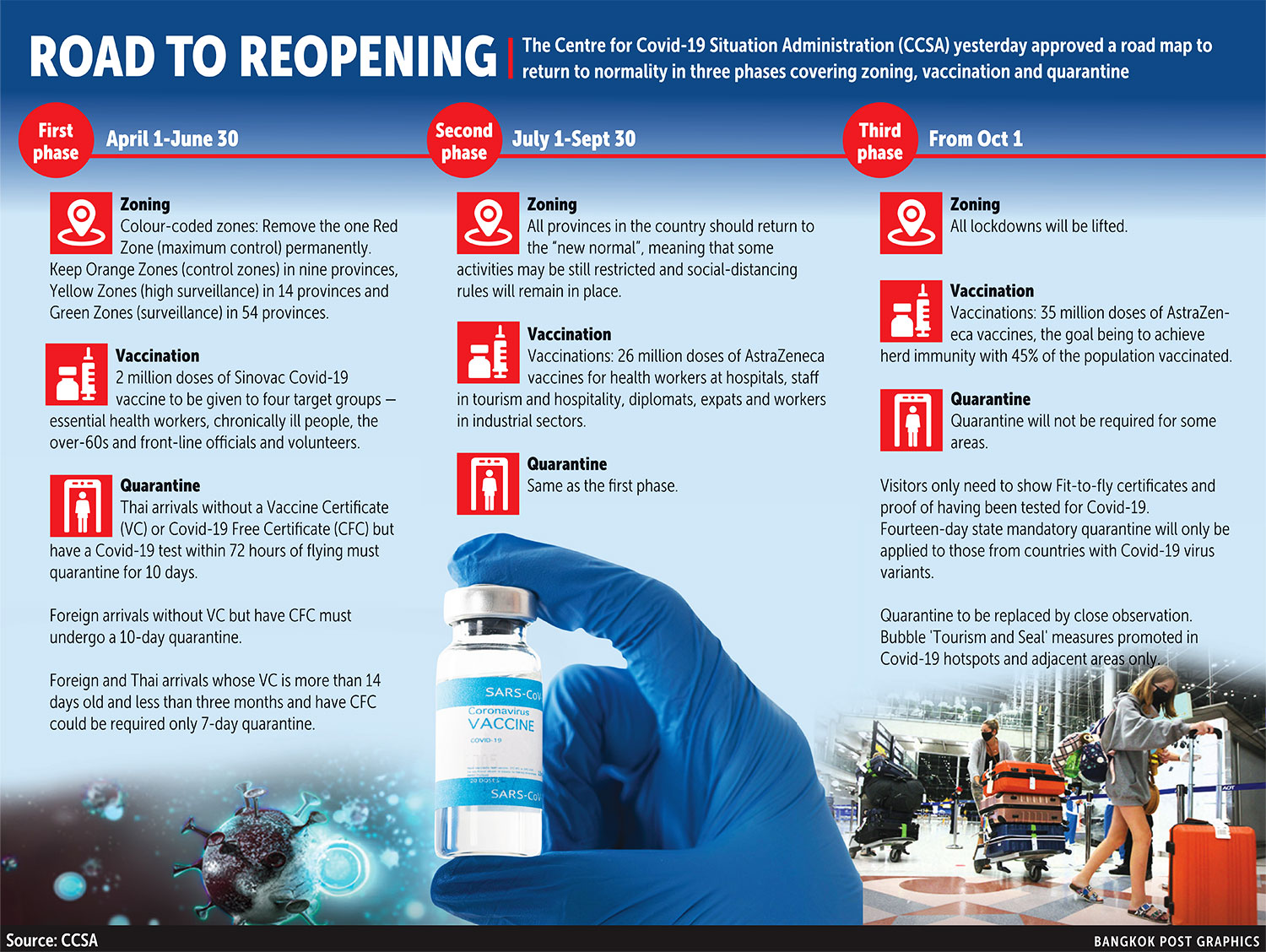 The plan is part of a three-stage roadmap to relax Covid-19 measures.

Centre for Covid-19 Situation Administration (CCSA) spokesman Taweesilp Visanuyothin said yesterday from April 1 to Sept 30, arrivals without a vaccination certificate (VC) and Covid-19 free certificate (CFC) would be quarantined for 10 days, and be tested for the disease twice.

Arrivals with complete 14-day VCs and CFCs would be quarantined for seven days and tested once. Those with VCs but without CFCs would be tested twice.

The 14-day quarantine period would remain in places for arrivals from countries where the Covid-19 virus has mutated, which is a global concern, Dr Taweesilp said.

From Oct 1, quarantine will not be required for some areas in the country under the condition that that over 70% of health workers in the area have been vaccinated and people who are likely to be in contact with at-risk people have received the vaccine. Initially, arrivals to those areas must come from low-risk countries.

The CCSA also agreed to extend the emergency decree for two more months to the end of May.

For the zoning roadmap, from April 1 to June 30, Samut Sakhon province, which is now categorised as a maximum and strict control area or "red zone" will be changed to a control area, known as an "orange zone".

Most provinces, or 54 in the country, are now under surveillance or "green zones" where most businesses are allowed to operate as normal but with limits on how many people can gather.

In the second stage which covers the period from July 1 to Sept 30, all provinces in the country should return to the "new normal", meaning that some activities would may be still restricted and social-distancing rules will remain.

For vaccinations, from April 1 to June 30, two million Covid-19 vaccine doses of Sinovac are due to arrive in the country.

Vaccinations will be given to healthcare workers, people with congenital diseases, people aged 60 years and over, and disease control staff who are likely to be in contact with Covid-19 patients.

Some 26 million vaccine doses of the AstraZeneca vaccine are scheduled to arrive to Thailand in the second stage of July 1 to Sept 30.

The jabs will be given to people in the tourism sector, people who travel frequently such as pilots; cabin crew and businessmen, the general public, diplomats and workers in industrial and service sectors.

In addition, 35 million more doses are to arrive in the third stage which begins on Oct 1.

From April 1 to June 30, people in quarantine will be allowed to exercise in fitness rooms and outdoors, swim, cycle in closed areas and buy food from outside. From Oct 1 (the third stage), inbound travellers are required to have only documentation of their Covid-19 negative status with them.

Former national police chief Pol Gen Chakthip Chaijinda is in the spotlight as a potential candidate for prime minister in the next general election.

The Joint Standing Committee on Commerce, Industry and Banking (JSCCIB) has inched up its 2022 GDP forecast, expecting the economy to grow by at least 3%, driven by the gradual recovery of the tourism industry.