A resident of Watthana district in Bangkok is on Wednesday injected with vaccine against Covid-19 at the Sang Thip sports complex on Soi Pridi Banomyong 2 as she is considered as being in an at-risk group after a new cluster of Covid-19 from bars and pubs in the Thong Lor area emerged. (Photo by Somchai Poomlard)

The fast-spreading British variant of Covid-19 is responsible for the latest cluster of infections that have been detected in entertainment venues across Bangkok, a virus expert said on Wednesday.

"We don't know how it could have been found here given the fact that we have the state quarantine system. If possible, there should not be any travel or movement right now. If that's not possible, it is highly necessary to have strict measures to control the disease," Yong Poovorawan, Head of the Centre of Excellence in Clinical Virology at the Faculty of Medicine, Chulalongkorn University, said on Wednesday at a press conference at the Public Health Ministry.

Dr Yong warned against unnecessary travel during the upcoming Songkran period when he estimated the number of new infections could skyrocket.

"Without sufficient intervention taken to curb these high-risk activities [during the Songkran holiday], the number of new infections could even reach thousands per day," Dr Yong said.

The estimate of the infection rate per day was calculated by taking into consideration both the highly contagious rate of the British variant -- 1.7 times higher than the original virus -- and the currently relaxed Covid-19 control measures in place, about 10 times less strict than those implemented during last year's Songkran period, he said.

Since activities aimed at stimulating the economy go against the containment of Covid-19, the government should find a balance, he said.

"The reason is that if there are so many new cases of Covid-19, economic stimulus through promotion of tourism won't work as nobody would want to travel to an epidemic zone," he said.

"Visiting older relatives during this festival is good, but it won't be good if such visits mean spreading the virus to them also," he said.

The older the people infected with the British variant are, the higher the risk of them developing severe symptoms, he said. If possible, he said the Thai tradition of visiting older relatives during Songkran should this year be conducted online instead.

Currently, most of the new infection cases involve young people who show no or few symptoms, which makes it more difficult to distinguish between those who are infected and those who are not, he said.

The infected people, however, have a heightened concentration of the virus in their throats, which increases the risk of them spreading the virus to older relatives they plan to visit during Songkran, he said. 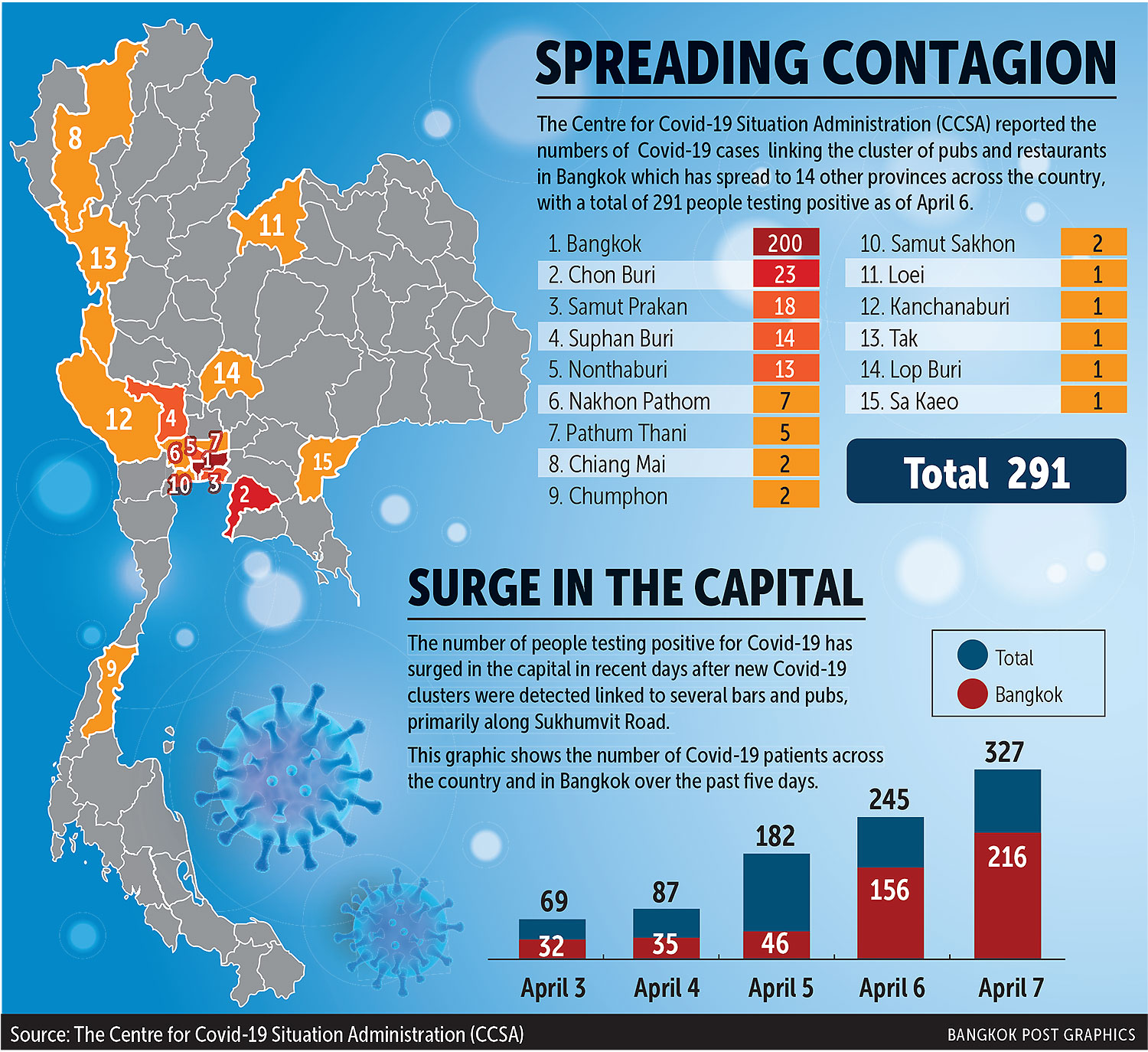 The renowned virologist also urged the government to speed up vaccinating the population against Covid-19 while dealing with the rise in number of new infections caused by the highly contagious variant.

Although vaccinated people may still be at risk of contracting the variant, infection after vaccination shouldn't lead to severe symptoms, with immunity induced to some degree, he said.

Britain has the highest rate of Covid-19 vaccination in Europe now and is seeing a significant drop in new infections while it has got its outbreak under far better control than other countries in Europe, such as Germany and France, he said.

Because most new Covid-19 infectees now show no or few symptoms, the spread of the virus could now occur anywhere and at any time as most people have become relaxed and complacent about the need to maintain their guard against the spread of the virus, warned Prof Dr Thiravat Hemachudha, director of the Health Science Centre of Emerging Diseases at Chulalongkorn University.

Prime Minister Prayut Chan-o-cha, however, insisted on Wednesday there would not be a new Covid-19 lockdown this Songkran festival, no matter what happens.

"Whatever will be, will be. The reason is it's a matter that involves a huge number of people. The government will have to try to cope with that later," he said.

He offered the reassurance that each province now has in place its own Covid-19 screening and quarantine measures.

"Of course we can order a new lockdown and make everyone stay home [during the festival]. But the question is will anyone be happy with that?" the premier said.

He was responding to concerns raised by medical experts over the possibility of Songkran travel and celebrations exacerbating the spread of Covid-19.

"The government is trying its very best to strike a balance between the need to stimulate the economy through tourism promotion and containing the spread of the outbreak," Gen Prayut said.

So far, 323,989 Covid-19 vaccine doses have been administered to 274,354 people nationwide, with some already having been given two shots.