Traffic is heavy on the road leading to the Ao Thammachart ferry pier in Laem Ngop district of Trat as tourists flock to Koh Chang on Saturday. (Photo: Jakkrit Waewkhraihong)

TRAT: Tourists flocked to Koh Chang on Saturday, on the first day of the Songkran holiday despite the sharp rise in Covid-19 infections that has dampened the festive mood across the country.

A heavy build-up of traffic was seen on the road leading to the Ao Thammachart ferry pier in Laem Ngop district on Saturday morning.

More than 300 vehicles were waiting in the car park to take ferries to Koh Chang as of 11.30am.

Traffic was backed up more than 200 metres from the Laem Ngop district office to the pier. Traffic was also heavy on another route from Khao Saming district to the pier, with tailbacks of more than 500 metres.

By noon, it was estimated that the waiting time to board a ferry had reached two hours. More than 3,500 vehicles were expected to take ferries to the island on Saturday.

Somsak Waisung-noen, a tourist from Nakhon Ratchasima, was taking a holiday break with 10 family members. He said his group had stayed overnight in downtown Chanthaburi before setting out for the pier to take the ferry to Koh Chang. They plan to stay on the island for three days before returning to Nakhon Ratchasima.

Mr Somsak said he was aware of the rising tide of Covid infections but wasn’t worried, as he and his family members had prepared properly to protect themselves.

The new wave of infections that originated in Bangkok nightspots has spread quickly to 62 provinces, with many of the cases being a UK variant that is far more contagious.

Trat has recorded just one new Covid case in the past three weeks.

Many provinces have imposed 14-day quarantine requirements for visitors from the capital area, putting a serious dent in celebrations during what is usually the busiest week of the year for travel. Thousands of people have cancelled hotel reservations, bus and train tickets.

And while car traffic headed to the North and Northeast has been heavy, bus passenger numbers on Friday were only about half of the total expected, according to the Transport Company, the state-run interprovincial bus operator. 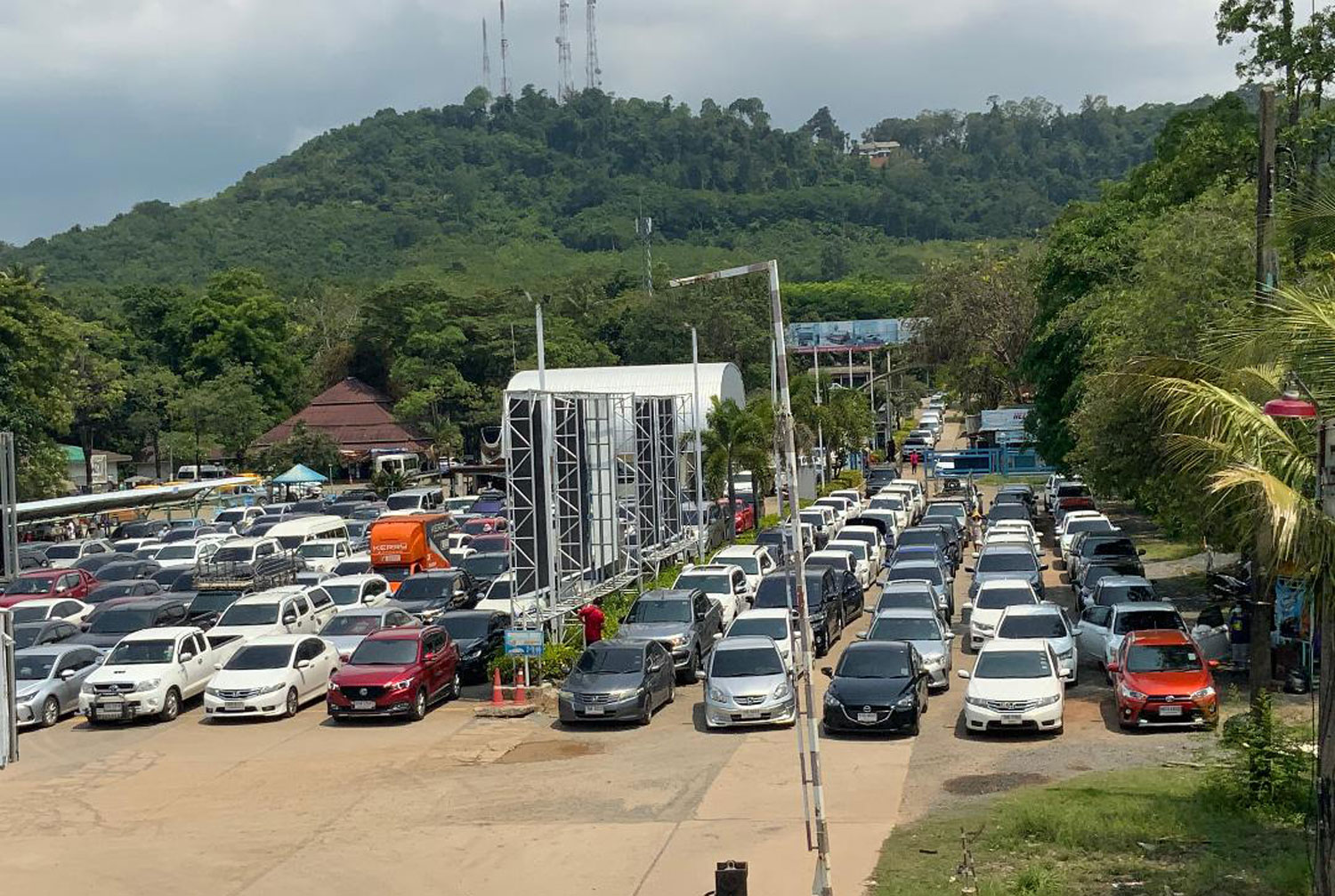 Waiting times to board the ferry to Koh Chang were estimated at two hours at noon on Saturday. (Photo: Jakkrit Waewkraihong)