A member of the military (right) and a worker carries a bed frame during a media tour at a Covid-19 field facility set up at Ratchaphiphat Hospital in Bangkok on Saturday. (Bloomberg photo)

More than 28,000 people could be infected by Covid-19 per day over the next month if no disease control measures are put in place during the current spike, which is thought to be more severe than the previous two rounds, a senior public health official warned on Sunday.

The Centre for Covid-19 Situation Administration (CCSA) reported 967 new Covid-19 cases on Sunday, the most ever diagnosed in 24 hours in the kingdom.

Sopon Iamsirithaworn, the deputy director-general of the Department of Disease Control (DDC), said its epidemiology division in collaboration with the International Health Policy Program had come up with a mathematical model to predict the number of people who could become infected per day if safety measures were not observed. In a worst-case scenario with no disease control measures in place, 28,678 people could be infected per day, he said. 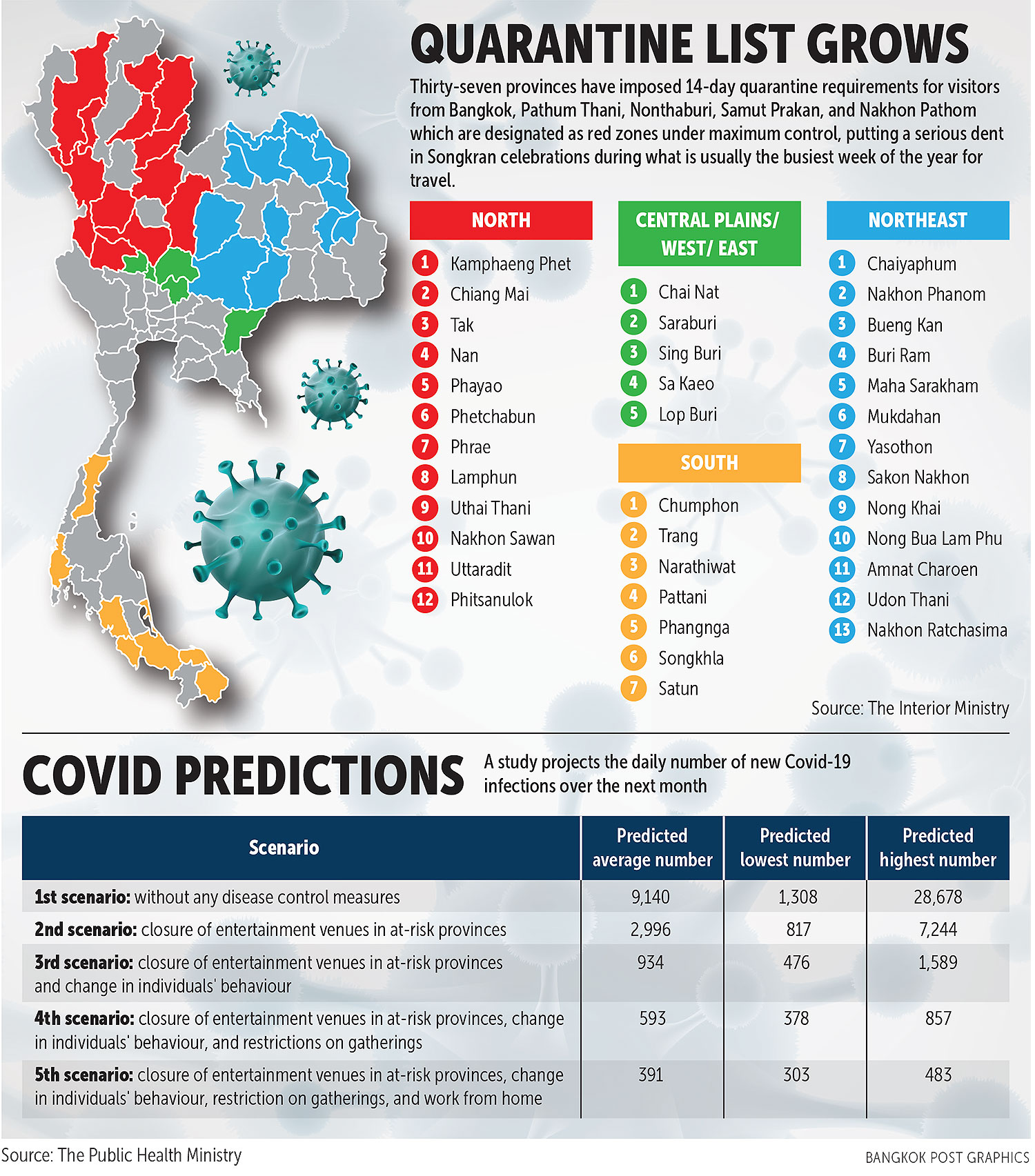 However, the average number of daily cases under this scenario would be 9,140, Dr Sopon added, while noting the lowest number could be 1,308 if people do not comply with safety measures.

As of Saturday, for the most recent phase of the outbreak, Bangkok had recorded an accumulated number of 1,114 infections. Of that number, 823 were linked to night entertainment venues in the capital, and the rest detected during proactive mass testing in communities, Dr Sopon said.

According to CCSA data, infections have been linked to 140 pubs in 15 provinces. Bangkok topped the list with 85 nightspots, led by the Krystal Club in Thong Lor, where 211 infections had been detected since the beginning of this month. Chon Buri recorded 11 infections, Prachuap Khiri Khan recorded nine, Pathum Thani seven and Chiang Mai six.

Dr Sopon said most of the kingdom's new transmissions were linked to pub clusters that have now spread to 70 provinces in the kingdom.

Operators of pubs in the 36 provinces must follow disease control protocols, including mask-wearing and strict screenings, Dr Sopon said.

Bangkok plans to install 10,000 field-hospital beds, a health official said, as the country strains to cope with a third wave of Covid-19 infections. (Reuters video)

Meanwhile, health officials in Chiang Mai reported hundreds of new Covid-19 infections and said they had been forced to cancel some of the planned celebrations of this week's Songkran festival.

The provincial public health office said 281 new cases had been detected, bringing the total number of confirmed cases since the beginning of this month to 662.

Sunday's figures were not included in the CCSA's daily updates on Sunday and will be reflected in Monday's nationwide report.

Chiang Mai's new caseload its highest since the outbreak began seven days ago in the province, a favoured destination for Thai and international tourists, particularly over Songkran.

Many tourists had already cancelled their trips there.

Chiang Mai has ordered people travelling from Bangkok, Nonthaburi, Samut Prakan, Pathum Thani and Nakhon Pathom to register through the CM Chana app and observe self-quarantine for 14 days. It also closed all entertainment venues until April 23.

The province decided to cancel some of the functions planned for Songkran festivities and scaled down others. The alms-offering ceremony planned for tomorrow at Tha Phae Gate was among the events scrapped. "We have to boost confidence for residents in the province and try to curb the spread of the virus," deputy provincial governor Rattaphol Naradisorn said.

Health authorities have asked people who recently visited 10 places connected to the latest outbreak to get tested for Covid-19.