Shoppers leave the CentralWorld shopping complex in Bangkok on Thursday. Retailers and malls nationwide have agreed to close earlier at 9pm in a concerted effort to help contain the spread of Covid-19. (Photo by Pornprom Satrabhaya)

The government is confident it can overcome the current Covid-19 crisis without needing to impose a nationwide lockdown, Public Health Minister Anutin Chanvirakul said on Thursday.

Speaking after a meeting of the national committee on communicable diseases, an upbeat Mr Anutin announced: "We have seen no point in imposing a lockdown for the time being.

"The [current] cycle of disease has only been two weeks and we have had good cooperation from all stakeholders. What we need to see now is less mobility. If we can do it, we will definitely see a declining number of new infections by next month."

The committee decided to suggest to the government that it ban the drinking of alcohol in restaurants nationwide and forbid mass gatherings, including asking schools and universities nationwide to conduct all their courses online. 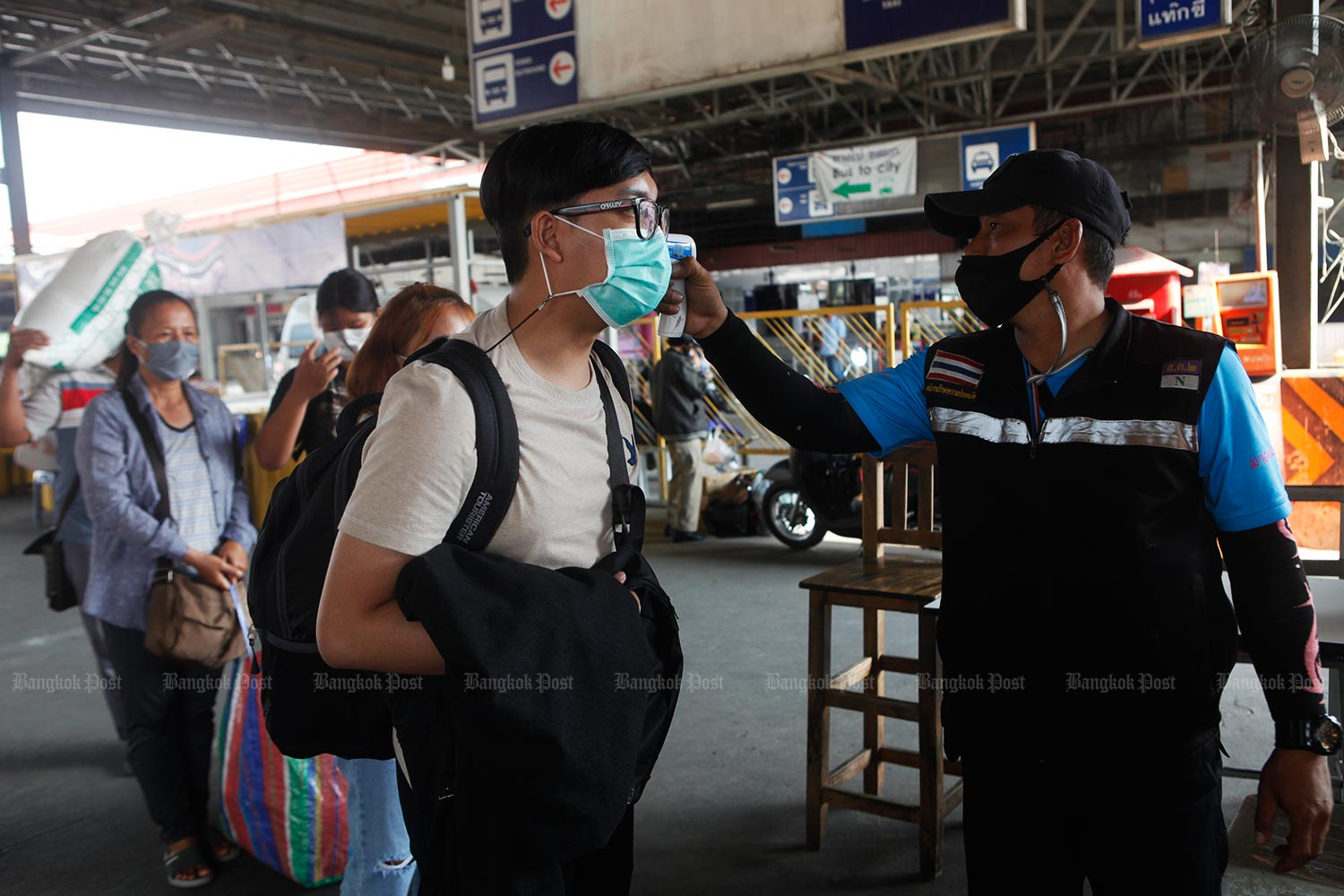 Just a quick check: An officer checks the temperature of a traveller on his arrival at the Mo Chit bus terminal. Although the Songkran holidays have come to an end, many people have chosen to delay their return to the capital due to the threat of the pandemic. As a result, the bus terminal was quieter than usual. (Photo by Nutthawat Wicheanbut)

Mr Anutin said the committee widely agreed on a raft of measures to control the disease, including ordering that restaurants shut at 9pm in red zone provinces and 11pm elsewhere. The sale of alcohol in restaurants should be outlawed across the country, members said.

Other proposals included a ban on parties and gatherings of more than 50 people, banning all in-person classes and closing amusement parks, even including recreation areas inside department stores.

The proposals will be discussed at Friday's meeting of the Centre for Covid-19 Situation Administration, to be chaired by Prime Minister Prayut Chan-o-cha. If implemented, the measures would be effective until the end of this month.

Mr Anutin said the national committee would not ask the CCSA to ban interprovincial travel and would instead allow provincial committees on communicable diseases to decide for themselves.

"We only suggest that people who visited home for the Songkran festival should work from home at their hometown for two weeks," he said. "Full-time wearing of facemasks is also a must when getting outside."

The minister did, not, however, say whether a curfew would be among the measures to be considered on Friday -- in April last year the government implemented both a lockdown and curfew to stop the disease spreading in its early stages.

Meanwhile, the National Security Council has also asked the CCSA to renew the national state of emergency, according to an official source familiar with the matter.

"But certain provinces with a critical situation of Covid19 would possibly need a curfew," said the same source, who refused to spell out when the CCSA might impose such curfews.

"At the very least, the Covid-19 outbreak would not stall the new parliamentary session that is due to begin on May 22," said the source.

This source, did say, however, that the CCSA and the government would not rush into imposing extreme measures because the government's economic advisors had asked for more time to assess the economic impact of the heightened Covid-19 restrictions.

Deputy Prime Minister Wissanu Krea-ngam said new preventive measures must strike a balance between better containing Covid-19 and the need to shore up the economy.

He declined to say whether the government's plan to reopen the country on July 1 would be affected by the intensifying Covid-19 situation, saying the outcome of Friday's CCSA meeting would determine future plans.

Unlike the previous wave of the Covid-19 outbreak, when migrant workers were found to be a primary source of the virus resurgence, the current wave originated in the wealthy Thong Lor area of Bangkok and involved affluent people who had travelled extensively, he said.

Infected migrant workers rarely travelled but these well-to-do people moved around a lot, he said, apparently suggesting that was the reason for the pandemic spreading so quickly to so many parts of the country.

Dr Chawetsan Namwat, acting director for emergency health hazard and disease control at the Department of Disease Control, said the daily rise had been four digits for the second straight day.

Since April 1, Covid-19 has been reported in 75 provinces, leaving only the two southern provinces of Ranong and Satun untouched.

Bangkok has this month recorded the highest number of new Covid cases every day.