Prime Minister Prayut Chan-o-cha on Tuesday defended the government's vaccination programme, insisting it had not been overly slow, nor unjustly favoured one producer over another.

His remarks followed criticism that the government had been slow in procuring and distributing vaccines, even as the country struggled with the latest wave of Covid-19 infections.

"Initially, the purchases Thailand made were based on the situation at that time, when we were successful in containing the outbreak," he said.

Back then, said the PM, his government did not want to put people's lives at risk since some of the available vaccines used untried technology.

Now those vaccines have been successfully used elsewhere, the government has allowed their manufacturers to make proposals and the government was considering ways to buy from them.

"Let me be clear. It's not that we acted too late or too little," said Gen Prayut. "Everything depends on the situation at a given time. We didn't want to subject people to risk when the vaccine was first produced. Several countries opted to do the same."

He assured that the vaccines Thailand now had were being administered quickly and efficiently.

"The idea of monopolising a local vaccination never crossed our mind," he said. "All we have ever thought about is safety. We can't afford to make the shots freely available because they are for emergency use only and the manufacturers won't be liable for undesirable side effects." 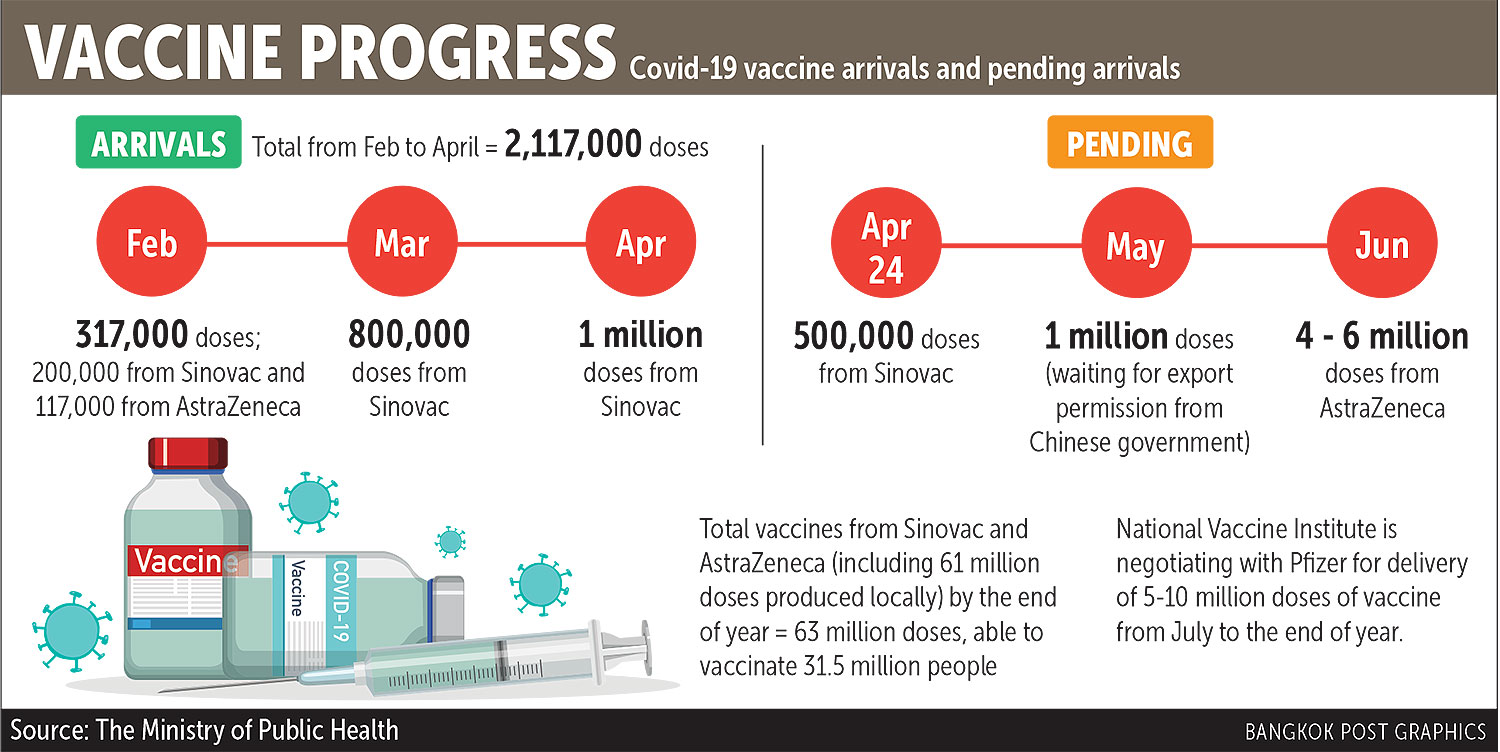 Gen Prayut pointed out that he had also responded to calls, especially from social media users, to allow the private sector to import vaccines from manufacturers other than the two which the government had already bought -- AstraZeneca and CoronaVac by Sinovac Biotech. He had set up a panel to consider the private sector's purchase of vaccines, he added.

The panel is led by Dr Piyasakol Sakolsatayadorn, adviser to the Centre for Covid-19 Situation Administration (CCSA).

Regarding people's access to vaccines, the prime minister said the Public Health Ministry would allow the public to book vaccination appointments through the "Mor Prom'' mobile app on May 1.

Exactly how many people would be vaccinated on a voluntary basis remained to be seen, he said.

The prime minister said his government was also awaiting price quotes from US-based vaccine producer Pfizer before going ahead with plans to buy 5-10 million doses of its vaccine.

"I can't confirm [whether Thailand will get it or not] but if all goes well, 5-10 million doses can be delivered as soon as July. The government is not dragging its feet," he said.

As of Tuesday, more than 2.1 million doses of Covid-19 vaccine have arrived in Thailand.

Some 500,000 more doses of the Sinovac vaccine will arrive on Saturday and a further one million doses are expected to be delivered next month if the shipments are approved by the Chinese government, the prime minister said. In addition, about 4-6 million doses of the AstraZeneca vaccine produced by Siam Bioscience, the local biotechnology firm contracted to manufacture the Covid-19 vaccine in Thailand, will be gradually rolled out from June.

The number of doses will be increased from July and reach 61 million by the end of the year, he said.