Prime Minister Prayut Chan-o-cha is insisting that the government is ready to deal with the latest wave of Covid-19 infections.

The new round of infections has resulted in a record-high of more than 2,000 new cases on Friday.

The Centre for Covid-19 Situation Administration (CCSA) reported 2,070 new cases discovered in the country, with four new deaths that increased the kingdom's Covid-19 death toll to 121. Bangkok saw the most new cases with 740.

Speaking in a TV pool broadcast at 9pm, Gen Prayut said the new surge was a result of infection clusters that developed before Songkran. 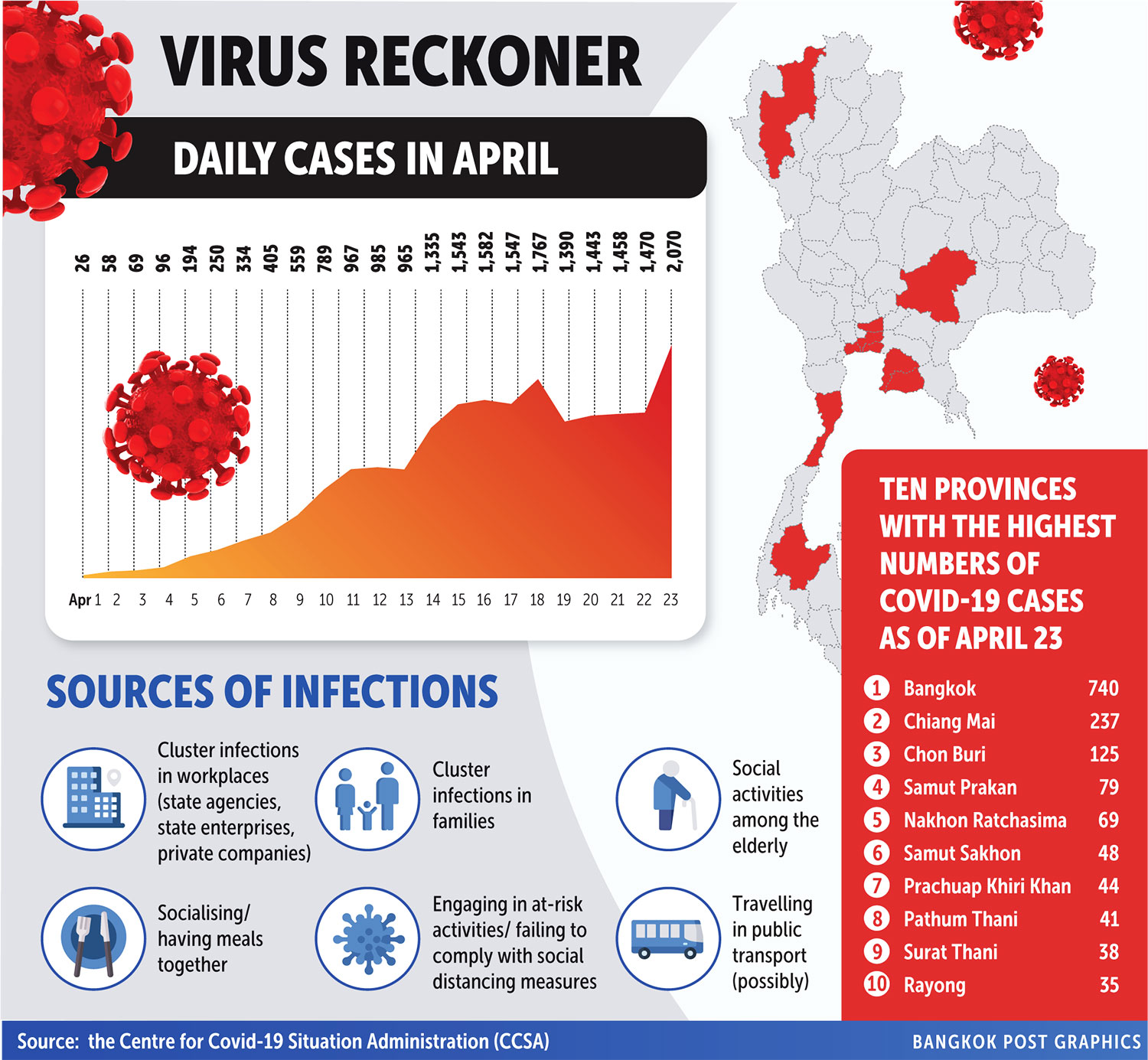 "People must not lower their guard and [instead] follow measures issued by the CCSA," he said. "This helps ease the burden on medical personnel and it can turn the [Covid-19] situation around -- which should be brought under control soon."

Currently, the government has more than 300,000 Favipiravir pills in reserve for the treatment of Covid-19 patients, he said.

The pills have now been distributed to all Covid-hit areas and 2 million more pills are to be imported, the PM said.

He added that more than 28,000 beds have also been arranged for patients and people considered at risk at private and state hospitals and hospitals currently taking care of thousands of patients daily, causing shortages of patient beds.

The government has not been complacent and will do all it can to provide beds to all patients, Gen Prayut said.

For now, about 840,000 people have been inoculated, half of which are essential health personnel, he said.

"These essential health workers work on the front line and risk their health every single day," Gen Prayut said. "Thus, the government has set a target to have all medical workers and frontline health workers inoculated by the end of this month."

"We have set goals to acquire 100 million doses of vaccines to inoculate 50 million people this year," he said.

He said Thailand has already procured 64 million doses of vaccines to use for a mass inoculation drive that will soon start until the end of the year.

Of them, 61 million are AstraZeneca vaccines, which will be delivered in June. The other 2.5 million doses are from Sinovac.

He said the Thai government has succeeded in securing the purchase of 10-15 million Sputnik V vaccines from Russia and an equal amount from Pfizer.

New cases have reportedly caused Bangkok to have less than 140 ICU beds for Covid-19 patients -- or just enough for eight days.

The current number of available ICU beds in Bangkok was sufficient for just 6-8 days in this scenario, the doctor said.

"The one-week bed reserve is considered to be insufficient. Bangkok has very little time left," he said.

Dr Taweesilp however noted that it took more than beds to treat Covid-19 patients, saying healthcare workers were working very hard to take care of them.

The permanent secretary for public health has already discussed the issue of limited ICU beds with all relevant agencies and has come up with three options.

First, hospitals assign more ICU beds to Covid-19 patients. Second, more Covid-19 ICU cohort units are set up and the last one, the most complicated one, is to set up a field of ICU facilities.