The government has pledged to work closely with the private sector to speed up the Covid-19 vaccine rollout and achieve its target of providing 100 million Covid-19 vaccine shots to inoculate 50 million people by the end of the year. 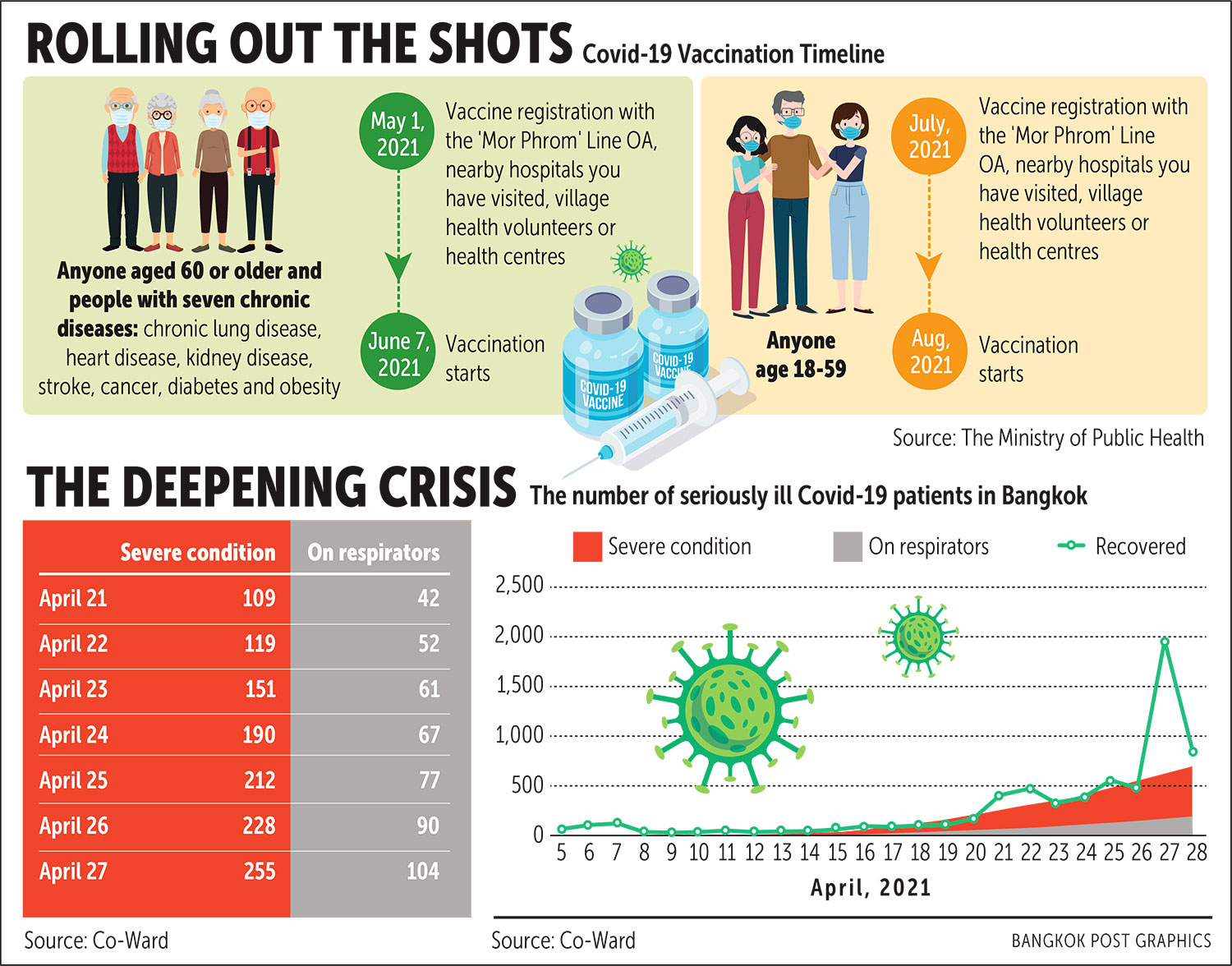 Prime Minister Prayut Chan-o-cha used a meeting with businessmen at Government House yesterday to stress that he and his ministers were committed to helping them acquire more vaccines.

"The prime minister was glad that the government will work with the private sector as they share a common aim of containing the outbreak of Covid-19 and restoring the economy to prepare for the reopening of the country," said government spokesman Anucha Burapachaisri.

The government has approved the private sector's proposal to set up four teams, comprising several companies, to help increase the rollout and buy more vaccines:

Team A will be responsible for distribution and logistics and will provide personnel and equipment support, plus additional vaccination areas arranged by private companies;

Team B (communication) will work to allay people's concern about the safety of vaccines and persuade them to be inoculated;

Sanan Angubolkul, the Thai Chamber of Commerce (TCC) chairman, said after the meeting that the prime minister had welcomed the proposal and stressed the TCC was ready to assist government moves to buy more vaccines and speed up their distribution.

Gen Prayut is now calling the shots in the Covid-19 campaign after the cabinet granted him temporary powers on Tuesday to enforce 31 laws relating to the handling of the pandemic.

Danucha Pichayanan, secretary-general of the National Economic and Social Development Council (NESDC), said after yesterday's meeting that the prime minister had instructed the council and the National Security Council (NSC) to work with the Joint Public and Private Sector Consultative Committee (JPPSCC) to support the procurement of vaccine doses by state and private agencies.

It was agreed at the meeting that the two sectors would collaborate to distribute vaccine doses and vaccinate priority groups in Bangkok, while the JPPSCC would be responsible for distribution and vaccination in other provinces, Mr Danucha said.

The Public Health Ministry and the Interior Ministry will work with the Federation of Thai Industries, the Board of Trade of Thailand, the Thai Bankers Association and the Tourism Council of Thailand to procure vaccine doses and achieve broad vaccine distribution.

Mr Danucha said the private sector would coordinate with the NSC and other concerned agencies to roll out a PR campaign and build public confidence in the vaccines.

The Public Health Ministry will be responsible for handling the registration of five priority groups: medical and healthcare staff, front-line officials such as immigration officers and soldiers, people with underlying health issues, people aged 60 and above, and those living in the worst-hit areas.

The Food and Drug Administration and Government Pharmaceutical Organisation have also been instructed to consider easing regulations to allow the private sector to procure vaccine doses, Mr Danucha said.