51m affected by Covid to benefit

The sign that announces the shop is participating in the Rao Chana (We Win) financial aid and the Kon La Krueng (Half-Half) co-payment scheme at the Chatuchak weekend market. (Photo by Pornprom Satrabhaya)

The government will hand out 7,000 baht each for four million people with high purchasing power and launch a new phase of "Khon La Khrueng" co-payment scheme as part of a new relief package worth 225 billion baht.

The total sum is aimed, through various schemes, to help 51 million people affected by the latest wave of Covid-19 which had claimed 318 lives with cumulative infections of 74,900 as of Wednesday.

Under the new package which will go before cabinet next week, the government will launch a "Ying Chai Ying Dai" (the more you spend, the more you get) scheme to give away e-vouchers to people from July to September to encourage them to buy food, products and services through the government's e-wallet.

Each person participating in the scheme can spend up to 5,000 baht per day.

The e-vouchers can be used from August to December. Four million people are expected to participate.

In addition, the relief package also consists of the 67-billion-baht extension of the "Rao Chana" scheme, a 18.5-billion-baht new phase of the "Section 33 Rao Rak Kan" scheme and other measures worth around 140 billion baht in total to assist people affected by Covid-19.

The measures will likely take place from July until December this year. Under the Rao Chana scheme, an additional 1,000 baht will be given to 32.9 million eligible people each week for two weeks. The handout can be spent until June, 2021.

Some 9.27 million members under Section 33 of the Social Security Act will be given an additional 1,000 baht each week for two weeks under the Rao Rak Kan scheme. The handout can be spent through the government's e-wallet app "Pao Tang" until June this year.

The 140-billion-baht budget will be allocated from the one-trillion baht emergency loan decree. 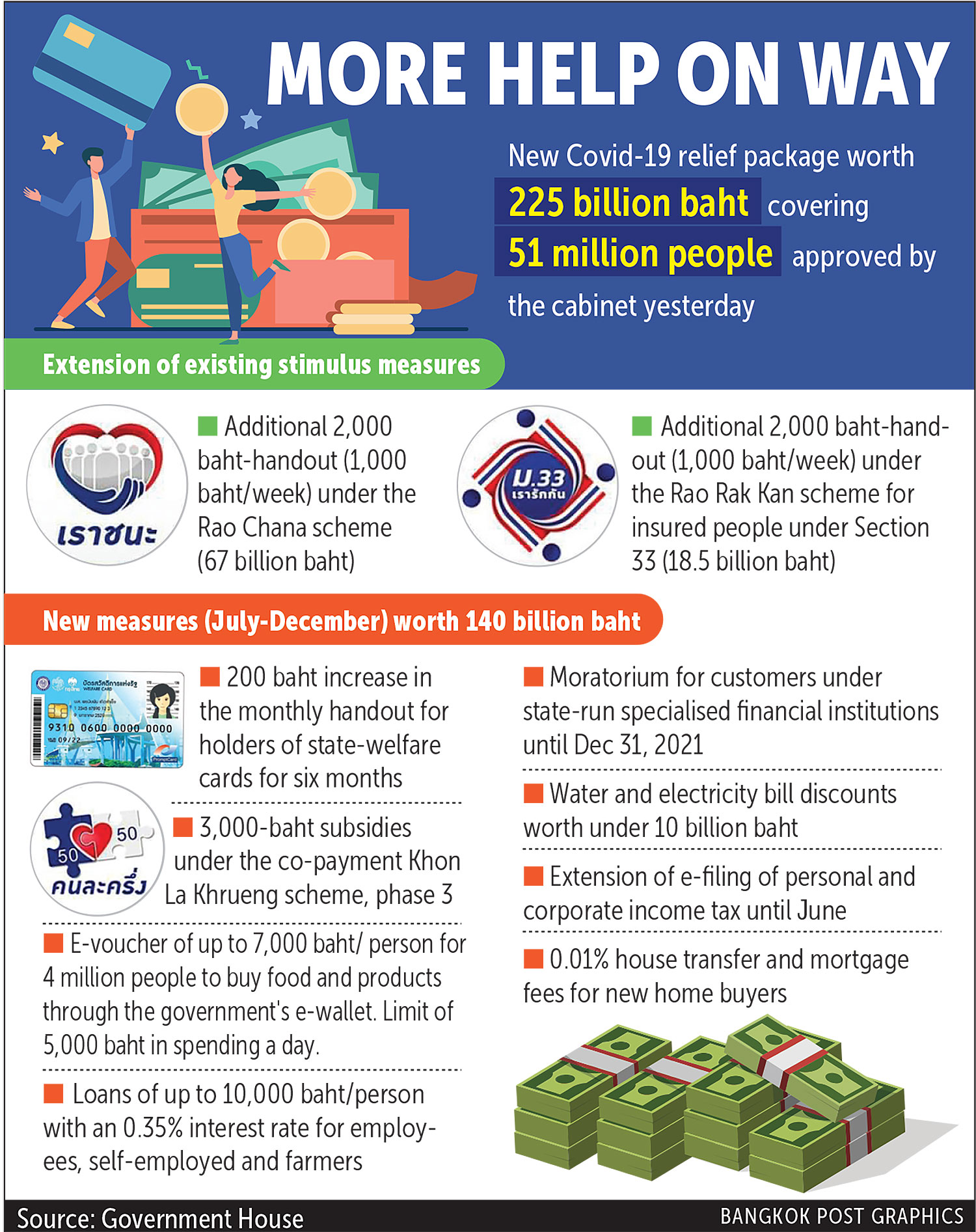 Another group of 2.5 million vulnerable people who need special assistance will also receive the same amount.

For medium- to high-income people, the "Khon La Khrueng" co-pay scheme will be continued in phase 3 to give 3,000-baht handouts to people to buy food and other products with the government paying for half of the purchase.

Some 31 million people are expected to participate in the scheme. Water and electricity bill discounts will be given to home owners and small enterprises from May to June.

About 90 free units of electricity will be given to houses which use less than 150 units per month.

For employees of private companies, the self-employed and farmers, the government will lend them 10,000 baht each with a monthly interest rate of 0.35% for a period of up to three years.

The loans, totalling 20 billion baht, will be given through the Bank for Agriculture and Agricultural Cooperatives and the Government Savings Bank.

Government spokesman Anucha Burapachaisri said about one million people would be eligible for the loan.

They must be Thai nationals aged over 20 and must not receive salaries from government agencies or state enterprises.