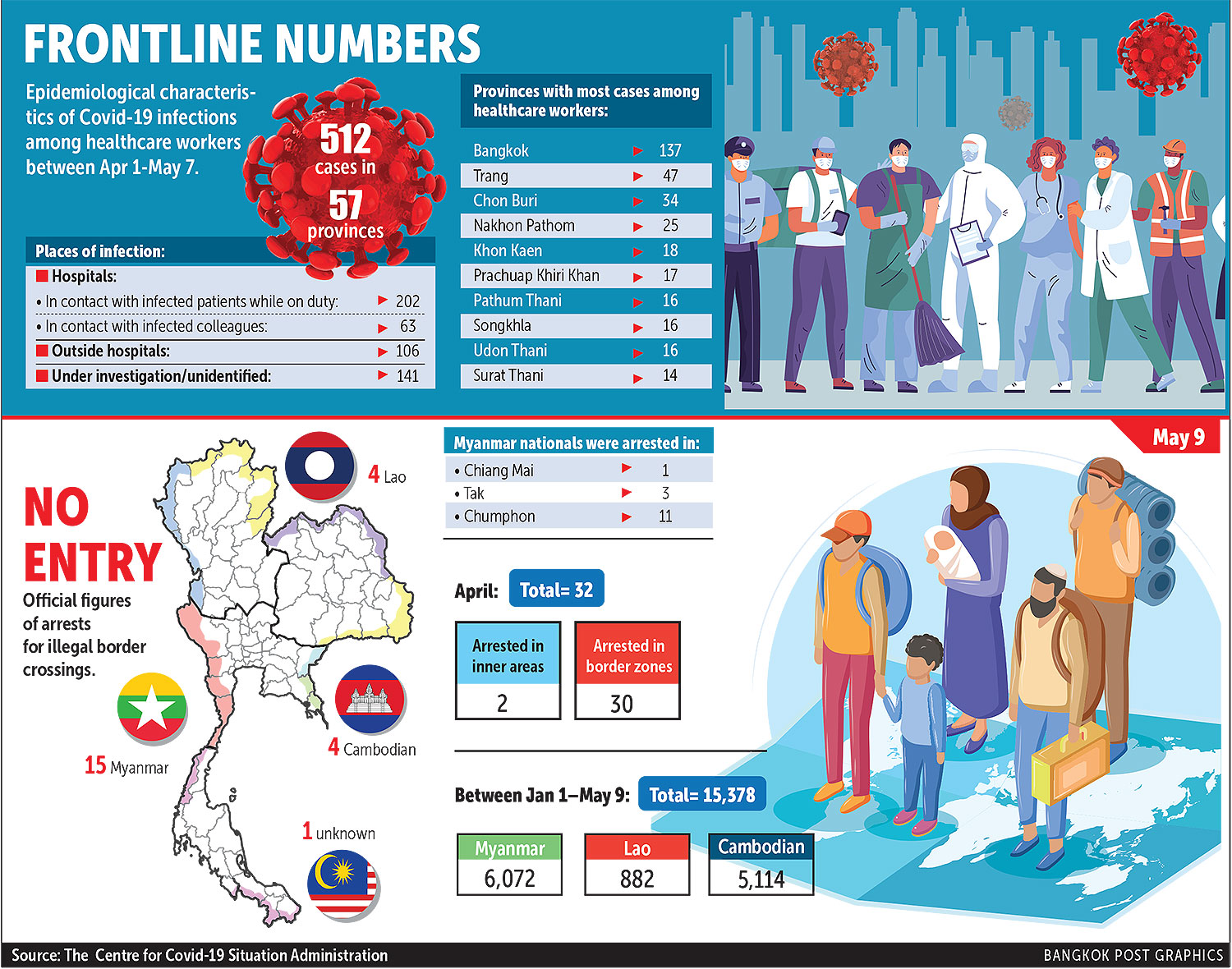 The move comes as a public health expert warned the new and highly dangerous variant of Covid-19 found in India could slip across the border with illegal migrants if left unchecked.

Immigration Bureau (IB) chief Sompong Chingduang told the Bangkok Post that the IB has not yet reopened any border crossings. It has worked with other security agencies, border patrol police and soldiers to step up border surveillance to prevent the entry of illegal migrants as the country struggles with a third wave of infections.

He was responding to reports on social media that migrants from neighbouring countries had sneaked across the border into Thailand. "Those who enter Thailand illegally will be prosecuted under the immigration law, the communicable diseases and the emergency decree," said Pol Lt Gen Sompong.

Kiattiphum Wongrajit, the Public Health Ministry's permanent secretary, said Thailand on Sunday logged 2,101 new coronavirus cases and 17 new deaths. Of them, 2,086 were local infections and 15 foreign arrivals. Bangkok led the country in new transmissions with 980 cases, followed by Nonthaburi (221), Samut Prakan (108), Chon Buri (96), Samut Sakhon (95) and Pathum Thani (93). About 70% of the new cases -- 1,457 -- were found in the capital and the five adjacent provinces.

In Bangkok, transmissions had increased in congested communities or busy areas such as in Klong Toey, the Mahanak intersection, Pak Khlong Talat, flats in Din Daeng district, a department store and communities in Bang Khae, Dr Kiattiphum said.

In Bangkok's adjacent provinces, infection clusters were also detected in communities, markets, workplaces with transmissions caused by contact with infected family members and colleagues, he said.

"Infection clusters were detected in businesses which employ migrant workers such as in Samut Sakhon [the previous epicentre of the second wave of infections]. In Nakhon Ratchasima, we also found infected workers who returned to their homes there," Dr Kiattiphum said.

All provinces have now been alerted to screen workers returning home and those coming from at-risk areas and employers have also been asked to halt movement of workers to prevent transmissions, he said.

Thiravat Hemachudha, director of the Health Science Centre of Emerging Diseases at Chulalongkorn University's faculty of medicine, posted on Facebook on Sunday that he was concerned that the Covid-19 variant that is currently ravaging India might trigger a fourth wave of infections in Thailand.

He said countries around Thailand are battered by the Covid-19 outbreak, and the border with Myanmar posed the most serious concern. "In the next few months, the variant found in India may slip across the border into Thailand from Myanmar. Business operators are now importing illegal migrants again," Dr Thiravat said.

"If the border is left unchecked like this and no tough measures are imposed in Bangkok and adjacent provinces, brace yourselves for a fourth wave. The current third wave will pale by comparison."

Five recent Covid-19 imports from neighbouring countries have underscored the danger of the virus being brought into Thailand by illegal border crossers, authorities say. The Centre for Covid-19 Situation Administration (CCSA) on Sunday said the five cases were all Thais who sneaked back into the country without passing through border checkpoints.

Two illegally crossed the border to Sa Kaeo from Cambodia on Thursday, while another two returned from Malaysia on April 28 and last Monday, respectively. One Thai slipped into Tak from Myanmar on May 2. All were admitted to state hospitals.

Thai authorities arrested 15,378 people sneaking in from Cambodia, Laos, Malaysia and Myanmar in the first four months of this year, CCSA data showed. More than a third, or 6,700, were Myanmar nationals, and another 1,700 were Thais.

The large number of arrests came despite intensified border patrols by security forces.

Deputy army spokeswoman Col Sirichan Ngathong said soldiers captured 380 illegal migrants, at least 43 of them Thais, along the border with Myanmar and Cambodia from April 30 to Sunday. "We are worried about this problem," CCSA spokesman Taweesilp Visanuyothin told a press conference.