New decree to save virus-hit economy

Workers form a long line as they wait to undergo a Covid-19 test at their construction site in Bangkok's Laksi district on Tuesday. Residents in communities around the site are also being tested. So far, 680 of the 1,667 workers have tested positive. Of them, 120 are being treated in hospital. (Photo: Pattarapong Chatpattarasill)

The cabinet has approved the draft of an executive decree authorising the government to borrow an additional 700 billion baht to revitalise the economy battered by the latest wave of Covid-19 infections, a government source said.

The draft was tabled at a cabinet meeting on Tuesday, chaired by Prime Minister Prayut Chan-o-cha.

The decree will authorise the government to borrow the money to rehabilitate the virus-hit economy as well as fund schemes to help people and entrepreneurs affected by the third wave of the pandemic which has been more severe than the two previous rounds, the source said.

Of the 700-billion-baht loan, about 30 billion baht will be earmarked for the procurement of medical supplies, vaccine shots, research and the renovation of hospitals, the source said.

With the new loan, public debt, at the end of September, is estimated at 9.38 trillion baht or 58.6% of the GDP which is close to the fiscal sustainability framework ceiling of 60%, the source said.

"The reason for issuing the new loan decree is because the government has almost completely used up the 1-trillion-baht loan under the decree issued last year to ease the economic impact during the first round of Covid-19,'' the source said. 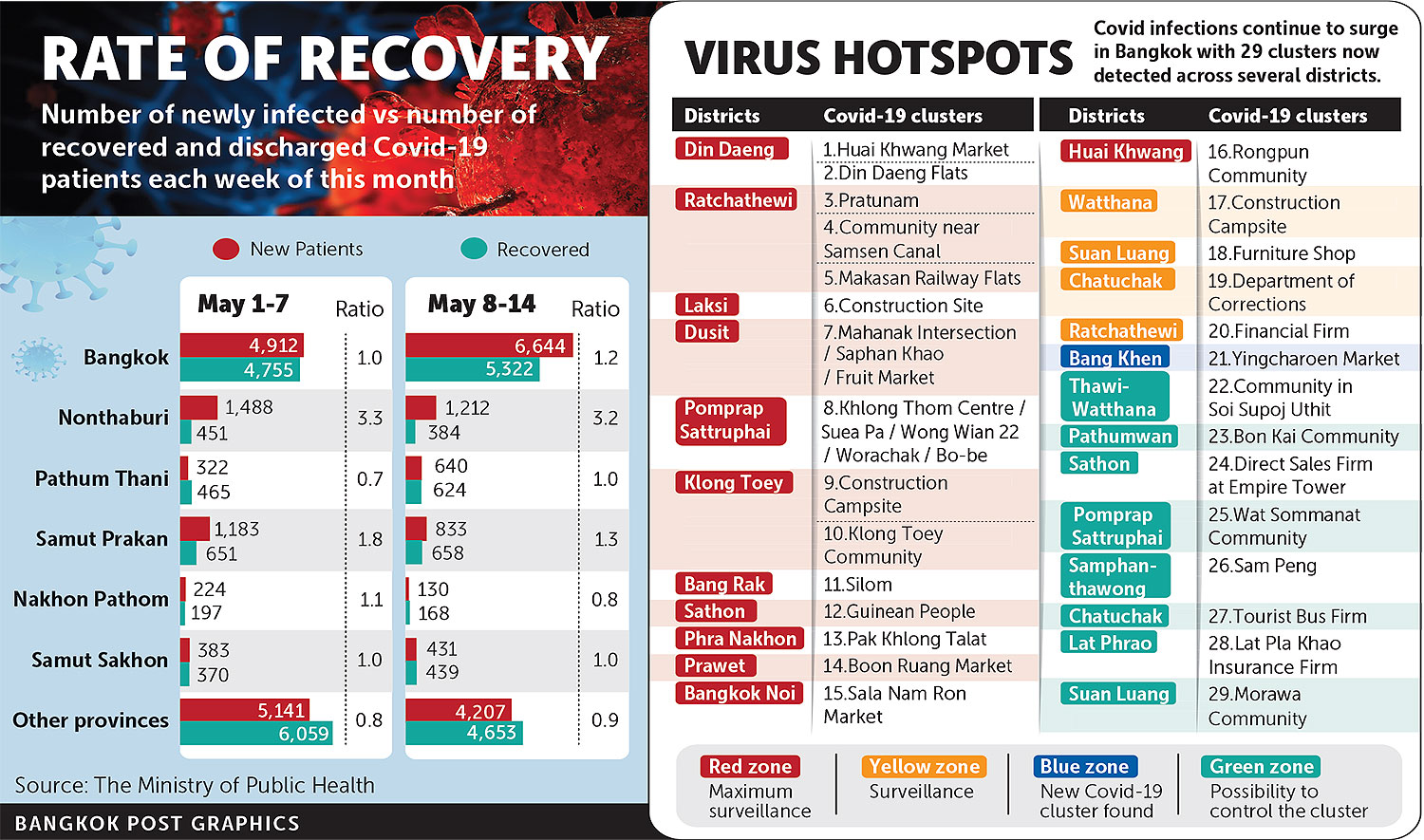 The source said that on May 11, the cabinet approved the disbursement of about 834 billion baht under the 1-trillion-baht loan decree, with 166 billion baht remaining.

The Finance Ministry's Fiscal Policy Office (FPO) previously slashed its economic growth forecast for the second time to 2.3% this year from its earlier prediction in January of 2.8% and 4.5% in Oct 2020, attributing the drop mostly to the battered tourism sector as a result of the Covid-19 pandemic.

Meanwhile, the Centre for Covid-19 Situation Administration (CCSA) reported that a two-month-old child was found dead among the 35 coronavirus-related fatalities reported on Tuesday, bringing the death toll to 649.

Taweesilp Visanuyothin, spokesman for the CCSA, said that 20 of the fatalities had contracted Covid-19 from infected family members, while 15 others contracted the virus from their colleagues, neighbourhood, hospitals and others. Some 2,473 new infections were also reported. The 35 fatal cases were 17 men and 18 women. The two-month-old child was the youngest among them, he said.

After speaking to the child's family, doctors learnt that the child had a heart problem from birth which was compounded by the virus, Dr Taweesilp said. He said the five biggest case clusters in the capital were a construction camp in Laksi district, Khlong Thom Centre, Huai Khwang market, Din Daeng flats and a gem market in Bang Rak district.