People prepare to receive a dose of the coronavirus vaccine at the Fashion Island shopping centre on Wednesday. (Photo by Varuth Hirunyatheb)

More Covid-19 vaccine supplies will be sought for Bangkok to catch up with rising demand for the vaccine while the capital's outbreak situation remains critical, Deputy Prime Minister and Public Health Minister Anutin Charnvirakul said on Wednesday.

Bangkok is a large, densely populated area and the centre of everything, he said during a visit to a vaccination unit at a shopping mall in Bang Khae.

It is actually capable of injecting at most 3,000 people with a Covid-19 vaccine per day but is currently supplied with only 500 doses each day.

He didn't explain how the shortfall came about. It comes amid reports some people are being kept waiting for hours for a jab.

The lower-than-expected amount of vaccine supplies came despite the fact that about 2 million doses of the vaccine were allocated to Bangkok last week for the mass vaccination drive which kicked off on Monday.

"If the outbreak situation in Bangkok is fully contained, the situation in all other parts of the country should improve dramatically too," he said.

Bangkok has been designated a dark red zone or maximum- and strict-control zone by the Public Health Ministry since the new wave of infections began.

As of Wednesday, 70 major clusters of Covid-19 infections have been detected in 35 districts of Bangkok, said Apisamai Srirangson, assistant spokeswoman for the Centre for Covid-19 Situation Administration (CCSA).

Among them was a new infection cluster identified at Prayuk Sport Supply Co, where 54 out of all 120 employees have tested positive for Covid-19, she said.

The company was ordered shut until June 18 while local health authorities continue testing people living in communities nearby, she said, adding that all infected employees are now being treated in hospital. 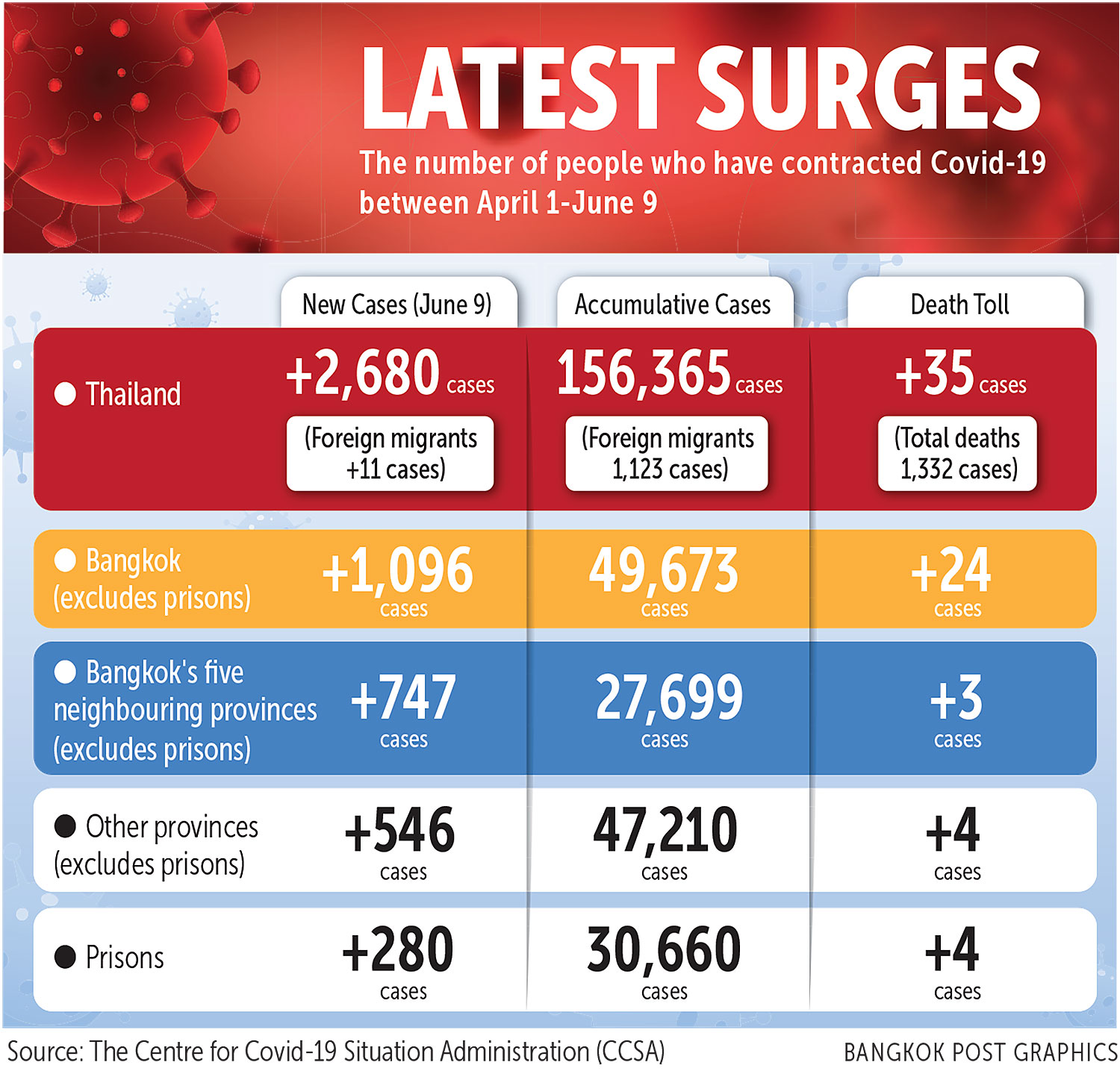 The CCSA on Wednesday recorded 2,680 new Covid-19 infections, 280 of which were cases detected in prisons.

A total of 35 deaths caused by Covid-19 infections were reported on Wednesday, bringing the toll to 1,332. The cumulative number of infections became 156,365.

A mass Covid-19 screening campaign is planned for today at 409 construction worker camps across Bangkok where about 62,000 registered workers live, in a new measure aimed at detecting as many infected people as possible to stall the spread of the coronavirus, said Dr Apisamai.

She described the campaign as a maximum Covid-19 control measure that will mark a peak in the number of new infections, to be followed by a significant drop in new cases.

Another matter discussed at Wednesday's CCSA meeting was the 200,000 illegal migrant workers now living in Thailand, with about 70,000 believed to be in Bangkok alone, she said.

In an attempt to better contain the spread of Covid-19 among illegal workers, the cabinet recently approved a proposal to extend the special registration of migrant workers to September, she said.

Employers hiring illegal migrants are encouraged to get their workers to register properly so they receive a proper health check, she said.

Meanwhile, Gen Natthapon Nakpanich, the National Security Council secretary-general who chairs the CCSA's operating centre, said Local Administrative Organisations (LAOs) should assume a supporting role in the national vaccination drive after they were given the go-ahead to procure vaccines for local distribution.

His remarks came after a state order was published with immediate effect in the Royal Gazette on Tuesday authorising the LAOs to acquire the Covid-19 vaccine using their own budget.

Until the order was released, the LAOs were barred from spending their own funds to acquire a vaccine. If they did, they would have been in trouble with the State Auditor.

The order followed calls by many LAOs to be given the power to purchase the vaccine for distribution in their localities.

The organisations insisted it would hasten people's access to the vaccine and contain the pandemic faster.