Only 6% of Thais have had vaccine

A man reacts as he receives his Covid-19 shot at Bang Sue Grand Stationin Bangkok on Tuesday, where mass inoculations continued despite many hospitals in the capital deferring jabs amid a vaccine shortage. (Photo: Varuth Hirunyatheb)

A renowned medical expert has urged the government to speed up procuring more Covid-19 vaccines to inoculate people to build up herd immunity after learning only 6% of the Thai population has been vaccinated.

Dr Prasit Watanapa, dean of the Faculty of Medicine, Siriraj Hospital, on Tuesday told a Facebook Live audience the country needed to build up herd immunity to curb the outbreak of Covid-19 as quickly as possible.

"The number of Thai vaccinees at the moment is not enough to stop the outbreak of the disease. The epidemic situation will improve within months if the government can continue to provide people with 300,000 vaccine doses per day," he said.

Dr Prasit on Tuesday did not state what percentage of people have received the first dose and both the first and second doses.

He said what he wanted to see was the government attempting to speed up procuring more Covid-19 vaccines for Thais.

However, he said he was confident that the Siam Bioscience plant producing the AstraZeneca vaccine would double its vaccine production shortly. 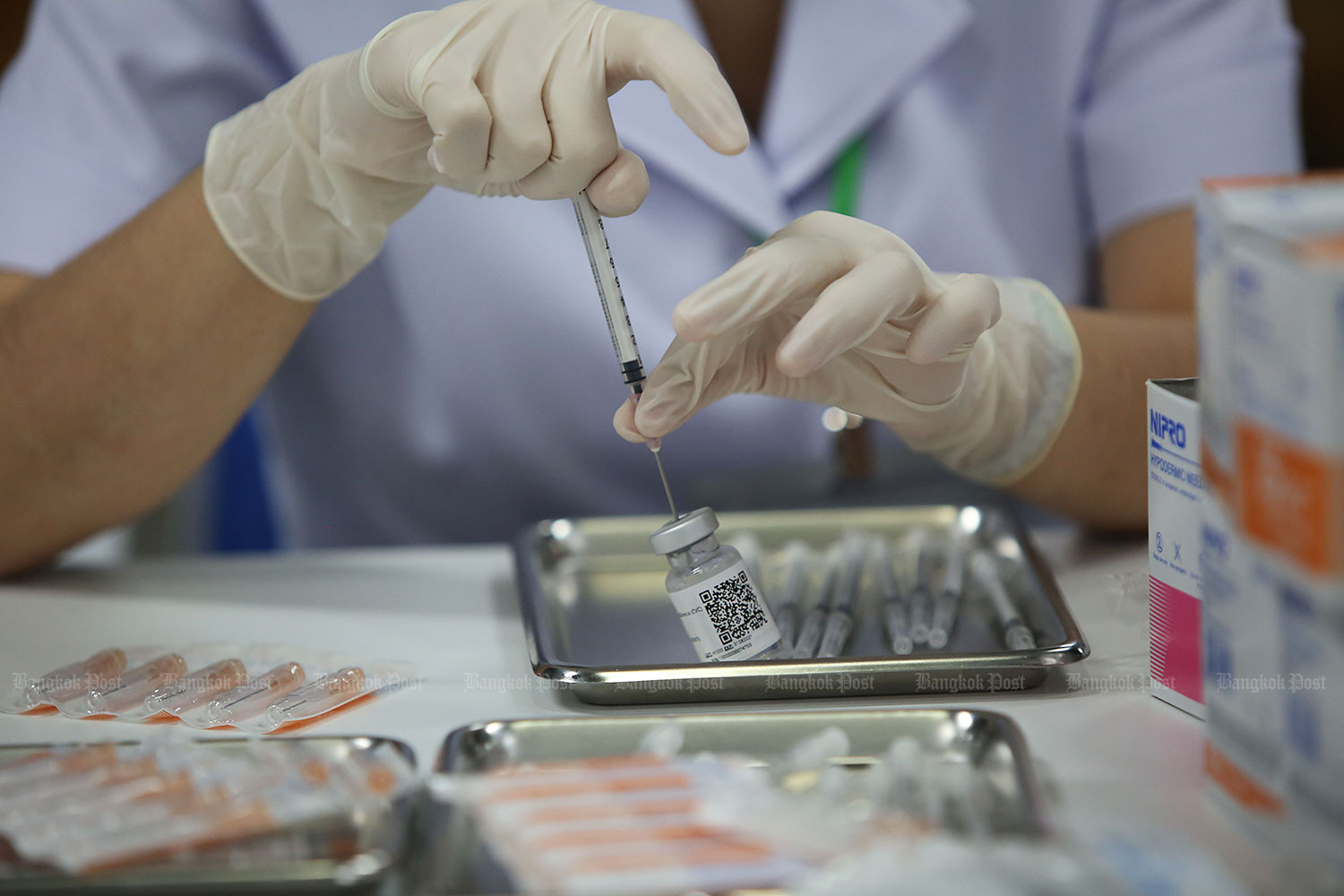 Steady as she goes: A nurse carefully draws vaccine fluid from a vial before administering it to a recipient at Bang Sue Grand Station yesterday. Vaccination at the station, which has not yet been officially opened for rail services, are available to the general public. (Photo: Varuth Hirunyatheb)

Dr Prasit went on to talk about the world situation which was now improving, saying the number of new Covid-19 infections and deaths have dropped from around 600,000 to 350,000 cases and 12,000 to 7,000 cases per day respectively, largely thanks to Covid-19 vaccines.

He said he had information that 2.3 billion people around the world have received doses, or 35 million doses being administered per day.

But most of the vaccine recipients were in developed countries when compared with those in middle and poor countries.

"The vaccine can stop infections and prevent loss generally. The number of infected patients in Thailand has already surpassed 200,000 since the outbreak happened last year," he said.

"However, if we can maintain the target of 300,000 shots given per day, we can see good results in months," he added.

Unfortunately, some problems have arisen due to a limited amount of vaccines, he said. The problems will be resolved shortly as the government will have more Covid-19 vaccines from AstraZeneca, Sinovac and Sinopharm.

WASHINGTON: Governments around the world on Thursday raced to head off a surge in coronavirus cases driven by the Delta variant, with US President Joe Biden offering new incentives to vaccine holdouts and Israel authorizing booster shots.