The Phuket Tourism "Sandbox", a pilot phase of Thailand's ambitious tourism reopening plan, kicks off on Thursday on the resort island amid hope and fears.

As businesses expect a tremendous boost to the local economy, relying heavily on tourism, many locals fear the pro-tourism programme may end up sparking a new outbreak of Covid-19.

About 100,000 foreign tourists are expected to visit Phuket during the third quarter of this year from July to September, expecting to generate tourism revenue of about 8.9 billion baht.

This month, a total of 426 flights would serve 8,281 inbound passengers and 3,613 outbound travellers. The southern island province would average about 13 flights a day, said government spokesman Anucha Burapachaisri on Wednesday.

A total of 249 tourists under the Phuket Sandbox programme are scheduled to arrive in Thailand Thursday on flights from Israel, Abu Dhabi and Qatar, said Taweesilp Visanuyothin, spokesman of the Centre for Covid-19 Situation Administration (CCSA).

These tourists will stay in Phuket for at least 14 days, during which two repeat Covid-19 tests will be given to ensure they are free of the coronavirus, he said.

From Thursday, Phuket hopes to strike a balance between driving the economy with tourism and controlling the spread of Covid-19, said provincial governor Narong Wunsiew on Wednesday.

However, he admitted that it wasn't the foreign visitors arriving in Phuket under the Phuket Sandbox programme who are worrying the province in terms of outbreak containment. It's those who will come to the province by land from within Thailand.

Tha Chatchai security checkpoint, the main Covid-19 checkpoint on the road leading to Phuket, still needs more staff and technology to ensure everyone who will pass onto the island is thoroughly checked, he said. 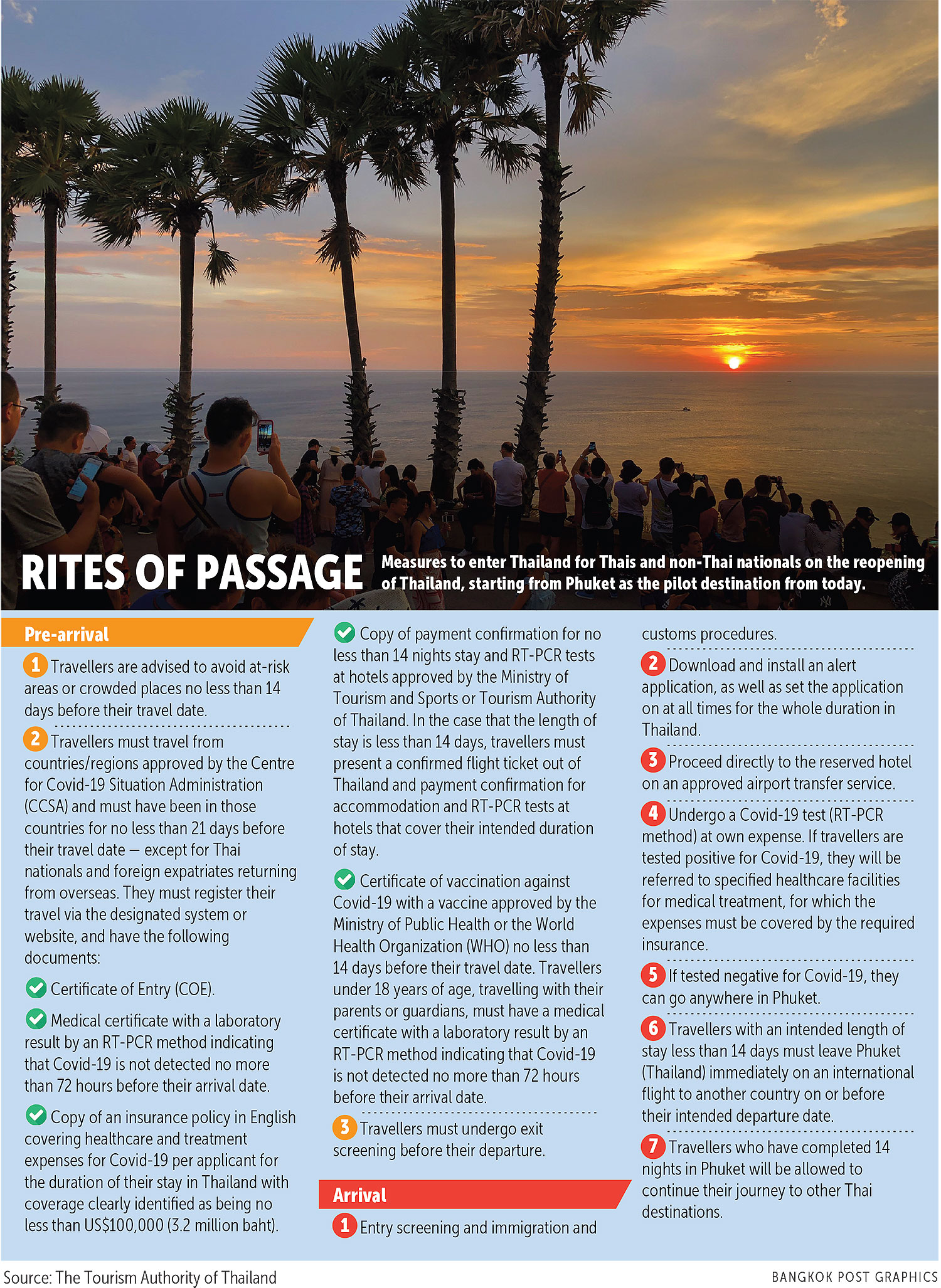 "Only those fully vaccinated against Covid-19 and have proof of their vaccination will be allowed to enter Phuket,'' he said.

Patong beach appears to be the most popular destination for foreign tourists who have booked their hotels in Phuket under the tourism sandbox programme.

A total of 383 rooms have been booked at hotels in the Patong beach area for 1,671 visitors, he said.

Prime Minister Prayut Chan-o-cha will be in Phuket on Thursday.

He will greet and welcome foreign tourists upon their arrival at Phuket international airport and visit the security checkpoint.

Citing findings from a recent online survey by a local health group of among 1,112 local residents, Manot Saithong, president of the group, said the most common concern shared by many is the possibility that tourists under the tourism sandbox programme could be carriers of a more virulent variant of the coronavirus and trigger a serious new outbreak in the province.

Survey respondents also doubted if foreign tourists will strictly follow the Covid-19 control measures imposed on them when they are here, Mr Manot said.

Doubts have also been raised over the efficiency of Covid-19 screening among Thai visitors to Phuket, he said, adding that if a new outbreak erupts in Phuket, young people will be affected as they are the only group of population that has not been vaccinated.

If all of the about 100,000 foreign tourists who have already booked their visits to Phuket in the next three months but have yet to confirm their travel actually come, about 13 billion baht in tourism-related income will be generated, said Thanusak Phuengdet, president of Phuket's chamber of commerce.