Harsher virus curbs on the way

Canning up for the curfew: Women select canned food at a Big C hypermarket in Bangkok’s Saphan Khwai area. Consumers in the capital flocked to supermarkets yesterday to shop for essential items after the Centre for Covid-19 Situation Administration decided to impose a curfew and restrict people’s movements for 14 days. (Photo: Nutthawat Wicheanbut)

Tougher measures, including a curfew, will be imposed in Bangkok and its five adjacent provinces for at least 14 days starting on Monday to curb the rapid surge in Covid-19 transmissions.

The decision was made on Friday when the kingdom recorded 9,276 new Covid-19 cases and 72 fatalities. The new measures are aimed at curbing the rise in cases within two to four weeks.

A 9pm–4am curfew will affect Greater Bangkok, which covers the capital and the provinces of Nonthaburi, Pathum Thani, Nakhon Pathom, Samut Prakan and Samut Sakhon.

The same curfew hours will also be imposed in the four southern border provinces of Narathiwat, Pattani, Songkhla and Yala, according to the announcement by the Centre for Covid-19 Situation Administration (CCSA). 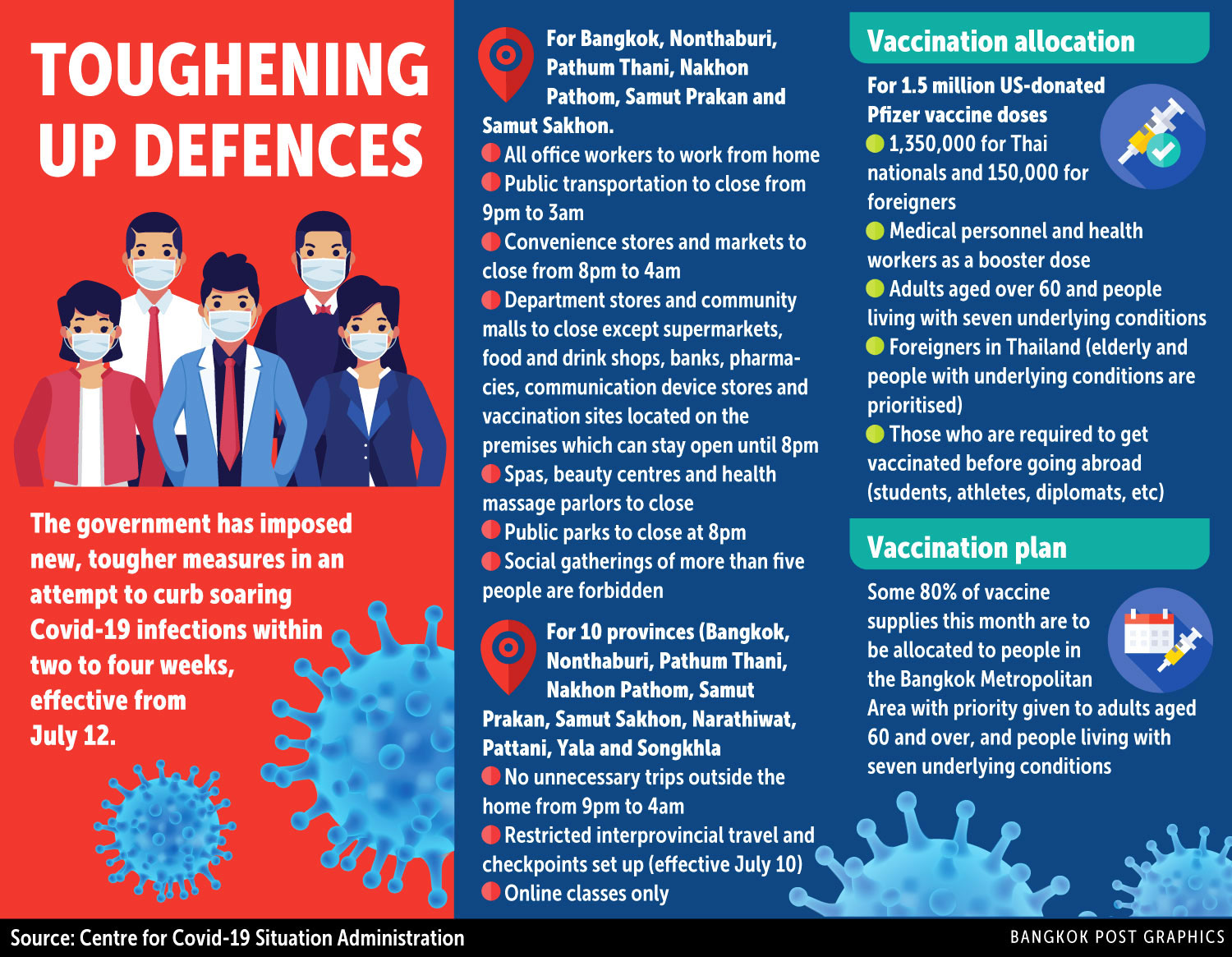 However, people seeking medical treatment at hospitals, medical personnel and utility workers doing their jobs are allowed to travel during the curfew.

The CCSA agreed that the measures, effective from Monday, will last for at least 14 days or until the situation eases.

Interprovincial travel will also be restricted in Greater Bangkok and the four southern provinces. Checkpoints will be set up on Saturday to discourage movement. People who have to travel must explain their reason to officials at the checkpoints.

Other measures to be enforced in the Greater Bangkok Area will include the closure of department stores and shopping malls. Supermarkets will be allowed to operate until 8pm.

Banks, pharmacies, shops selling communication devices and vaccination centres located at malls and department stores will be allowed to open until 8pm.

In Greater Bangkok, all eateries will close at 8pm. All businesses are encouraged to enforce a work from home policy, while public transport services will stop from 9pm–3am.

Public parks will close at 8pm. All businesses considered at risk of spreading infections, such as salons, spas and traditional massage parlours will be closed. No gatherings of more than five people will be allowed, except for religious functions. Schools are expected to only conduct lessons online. Convenience stores and night markets will close from 8pm–4am.

Greater Bangkok is the centre of the third virus surge that began in early April, triggered by the arrival of the Delta strain. Health officials said it would soon dominate in Thailand.

The measures were announced as new transmissions continued to rise with no let-up in fatalities, even though all construction worker camps have been closed and dining in at eateries has been banned since Monday.

There is also a severe bed shortage as more patients stay longer in hospitals and the rate of discharge slows.

Sanan Angubolkul, chairman of the Thai Chamber of Commerce, said the chamber agreed with the new measures that will be imposed in the 10 provinces.

The measures will have some impact on people's daily lives, but they are necessary to curb the rapid transmission of Covid-19, he said, adding that the private sector was willing to comply.

However, he said that it was estimated that the measures would cause economic damage of 50–100 billion baht, or about 3–5 billion baht per day.

In light of this, the government may need to inject more cash into the economy to compensate for the damage, he said, adding that it is important to control the outbreak quickly to limit the economic damage.

The government must roll out remedial measures to help businesses affected by the measures by drawing on the 500 billion-baht loan, he said.

"The tough measures are expected to slow the rapid rate of transmissions. It is also important for the government to do everything in its power to procure more vaccines for people," Mr Sanan said.

Of the newly recorded cases, 8,975 were local infections, 23 were imported and 278 were found in prisons.