AstraZeneca jabs as booster for medics

The road outside the Grand Palace is almost empty of traffic in the late evening, hours before the lauch of the 9pm-4am curfew on Monday night as part of wider measures to limint the transmission of Covid-19 in the 10 hardest-hit provinces, including Bangkok. (Photo: Pornprom Satrabhaya)

The Public Health Ministry has decided to start administering AstraZeneca's Covid-19 vaccine as a second dose to those who had received a Sinovac jab for their first shot, in what is seen as a major shift in the government's vaccination policy.

The AstraZeneca jab will be administered three to four weeks after the first Sinovac injection, Public Health Minister Anutin Charnvirakul said on Monday, adding a combination of the jabs will confer greater immunity against the Delta variant of the coronavirus.

That said, Mr Anutin stopped short of explaining what those who have had two shots of the Sinovac vaccine should do once the change in policy comes into force, or how it would affect people who are waiting for their first or second dose of the AstraZeneca vaccine. 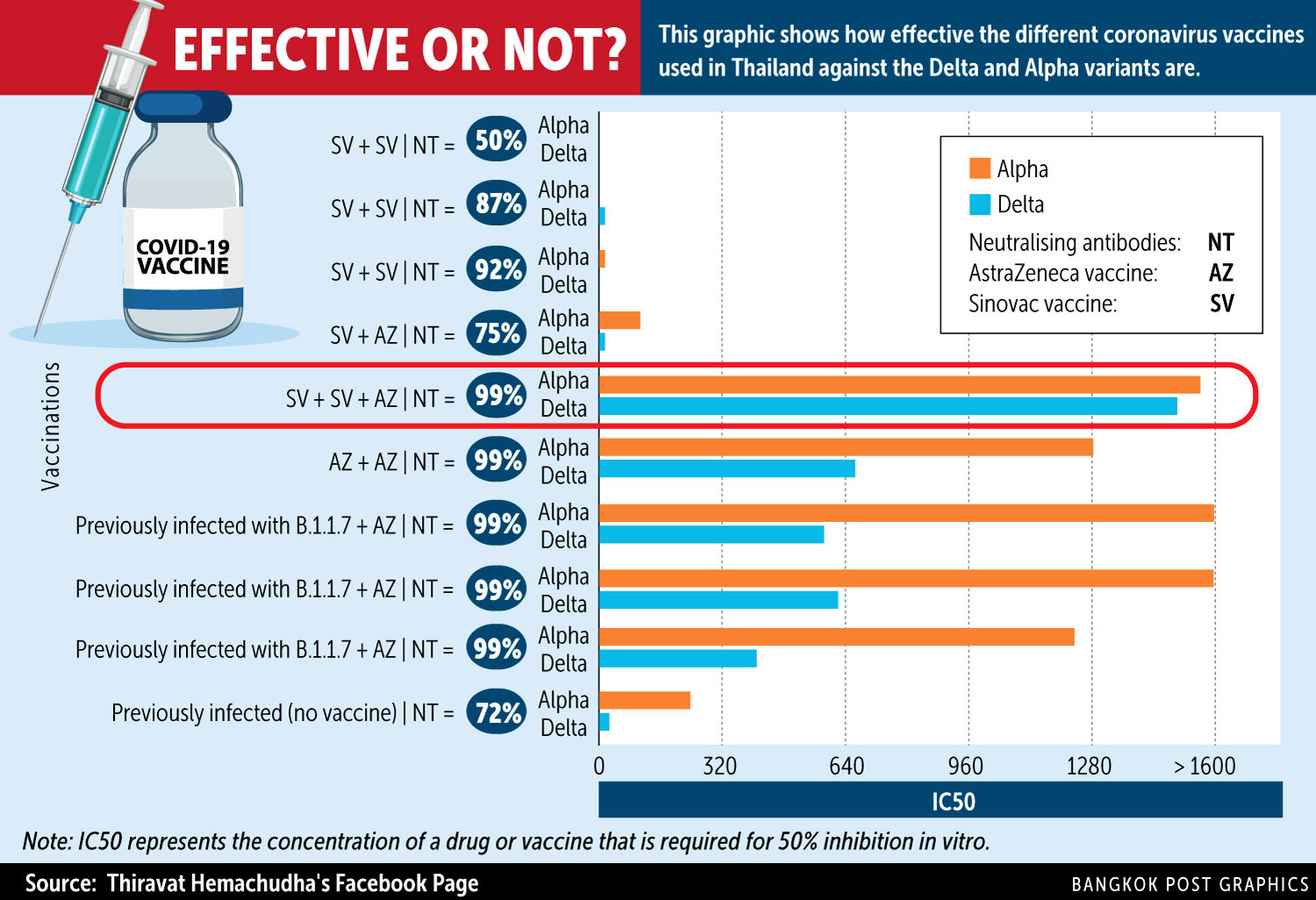 The change was announced after the National Communicable Diseases Committee convened a meeting to discuss measures to deal with the rapid spread of the Delta strain, which was first detected in India and is rapidly becoming the dominant strain in Thailand.

The move also came amid growing questions about the efficacy of the Sinovac and AstraZeneca jabs against the Delta strain.

A source at the Public Health Ministry said from now on, a combination of the vaccines will be administered in the national inoculation campaign.

"We won't administer Sinovac jabs as the first, second or booster shot anymore. According to research, a shot of Sinovac, followed up by an AstraZeneca shot, can trigger an immune response that is almost equal to two shots of AstraZeneca's," the source said.

The minister also announced the start of a booster shot drive, which would launch before the end of the month, for frontline medical workers who had received two shots of Covid-19 vaccine.

The third shot, he said, would be administered three to four weeks after the second shot.

"The booster shot will be mainly the AstraZeneca vaccine," Mr Anutin said. "Daily fatalities could exceed 100 and new cases above 10,000 a day if no adjustments were made to the current programme."

The committee also approved the use of rapid antigen test kits in hospitals to reduce queues for RT-PCR tests.

The rapid antigen test kits must be approved by the Food and Drug Administration (FDA), he said, adding that the test kits will be used at more than 300 hospitals nationwide.

Speculation about the government moving to allow at-home testing has grown since testing centres and units were unable to cope with the increasing demand for Covid-19 tests after infections soared across Bangkok and its neighbouring provinces.

The committee also approved home isolation and community isolation for asymptomatic Covid-19 patients and those with mild symptoms, with the National Health Security Office (NHSO) working with hospitals to handle the matter, Mr Anutin said.

The move is a collaboration between the Public Health Ministry and the Bangkok Metropolitan Administration.

Dr Kiattiphum said that the FDA is expected to propose to allow ATKs, which are currently allowed for use by health professionals only, to be sold at pharmacies to facilitate at-home testing.

NHSO secretary-general Jadej Thammathat-aree said that NHSO will work with the Institute for Urban Disease Control and Mahidol University's faculty of medical technology to conduct proactive case finding in Bangkok for about two weeks.

During a TV show interview, Boon Vanasin, chairman of the Thonburi Healthcare Group, said that private hospitals are collaborating with state agencies to import mRNA vaccines from BioNTech in Germany as well as Novavax in the United States.

About 20 million doses of the vaccines will be bought, he said.

"Prices, including storage and transport costs, are estimated to be around 900 baht per dose, excluding taxes," Dr Boon said. "If the deal is a success, the vaccines will arrive this month because we have been in contact since October last year."