'Don't give up,' PM says to the public

The cabinet has approved a 42-billion-baht package of financial assistance for people and businesses affected by the government's partial Covid-19 lockdown, currently implemented in Bangkok and nine other provinces to contain the coronavirus outbreak.

The package was approved following strict Covid-19 control measures including a 9pm-4am curfew that were imposed on Monday in the 10 provinces considered "dark-red zones" in terms of the severity of the Covid-19 situation. The provinces are Bangkok, Nakhon Pathom, Nonthaburi, Pathum Thani, Samut Prakan, Samut Sakhon, Narathiwat, Pattani, Yala and Songkhla.

After Tuesday's cabinet meeting, Prime Minister Prayut Chan-o-cha posted on his Facebook page saying the cabinet had approved new Covid-19 relief measures, which were proposed by the government's economic team.

The government is trying to as much as possible compensate the people affected by its new Covid-19 restrictions, he said.

And even though these measures require substantial funds to finance, they had been contemplated and found to be necessary to help affected people survive this crisis, the premier said.

"Please don't give up in this difficult time. I and the government will find every way to help all of you as much as possible," he said. "We won't lose this war [against the outbreak]. Nothing will make us give up. No matter what will happen next, we will fight until we win." 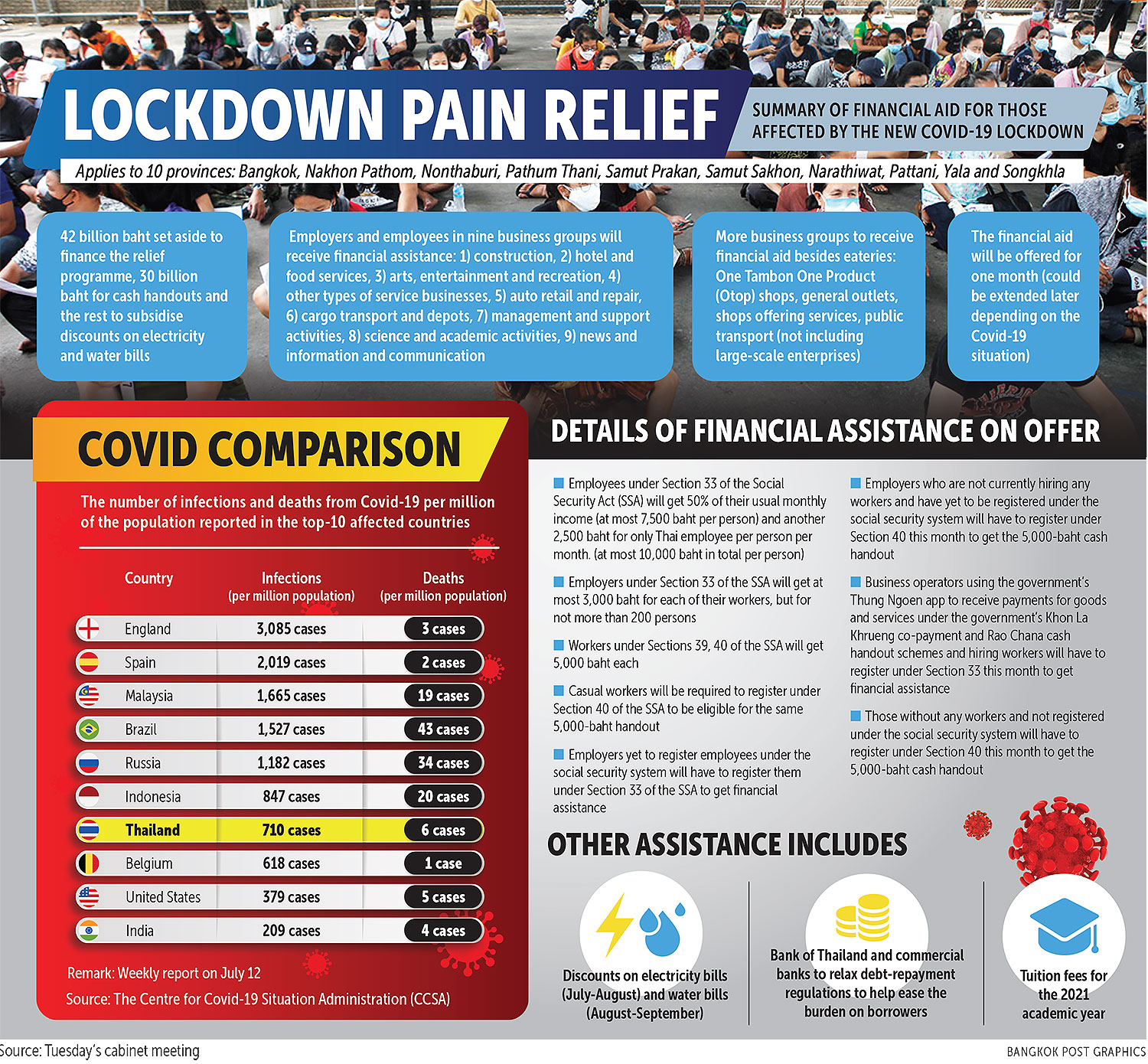 Danucha Pichayanan, secretary-general of the National Economic and Social Development Council (NESDC), said these relief measures are intended for both business operators and workers in the 10 affected provinces.

Nine groups of business sectors are included in the financial assistance programme, including construction, hotels, food services, art, entertainment and recreation, he said.

Workers registered under Section 33 of the Social Security Act, for instance, will receive at most 10,000 per person for one month, while their employers will each get at most 3,000 baht under a compensation rate of 200 baht per employee, he said.

Other types of workers registered under Sections 39 and 40 of the same law will receive a cash handout of 5,000 baht for one month as well, he said.

Employers and workers who have yet to be registered under the social security system will have to first register to become eligible to receive these benefits, he said. More assistance will come in the form of discounts on electricity and water bills, he said. 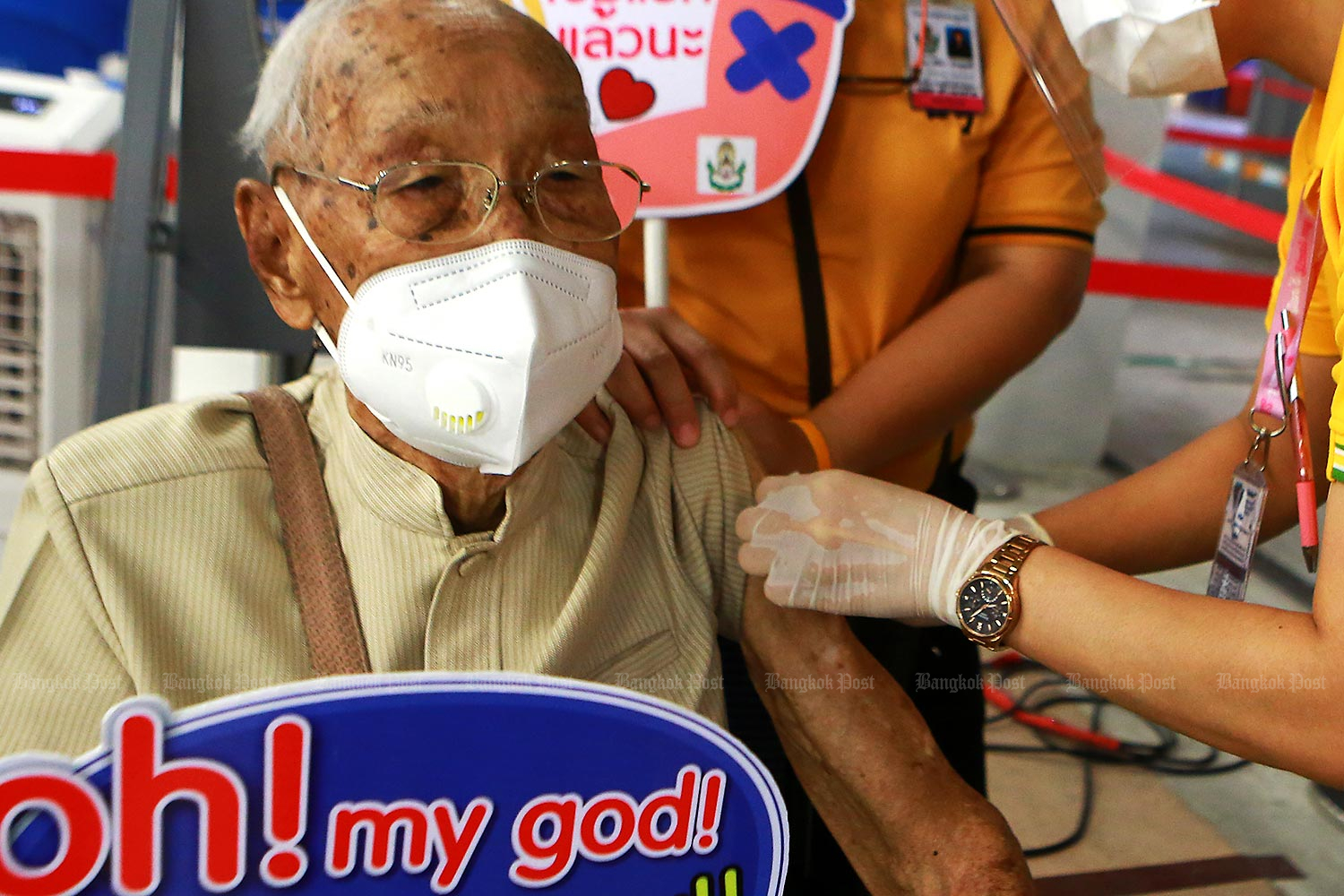 Senior protection: Sawang Kamasunthorn, 105, gets his first dose of the AstraZeneca Covid-19 vaccine at Phramongkutklao Hospital in the capital yesterday. (Photo: Somchai Poomlard)

Small business, excluding government and state enterprise offices, won't have to pay for the first 100 units of electricity, while medium and large not-for-profit organisations will be exempt from paying the minimum charge until December, he said. Water bills will be lowered by 10% for households and small businesses from August until September, he said.

The cabinet also resolved to lower tuition and other related fees for the first term of this education year and asked the Bank of Thailand, commercial banks and other financial institutions to relax their debt payment regulations, he said.