The Public Health Ministry said no less than 500,000 doses of Pfizer's Covid-19 vaccine donated by the United States will be allocated to frontline health workers, before insisting no VIPs will be allowed to bypass the system to acquire the jabs.

A spokesman for the ministry, Rungrueng Kijphati, on Sunday dismissed rumours which claimed that only 200,000 doses out of the 1.5 million Pfizer jabs donated by the US will be distributed to frontline medical workers.

While most of Thailand's estimated 700,000 frontline health workers have received two Covid-19 jabs by Sinovac, many aren't confident in the vaccine's efficacy against the Delta variant, first detected in India and which is currently dominating Thailand.

Doubts surrounding the government's plan over the donated doses emerged after a cardiologist with Chiang Mai University's Faculty of Medicine questioned the allocation of the vaccine.

On Facebook, Rungsrit Kanjanavanit claimed to have learned during a meeting that the government is planning to allocate only 200,000 out of the 1.5 million doses donated by the United States for frontline medical personnel.

"As a cardiologist with a moderate risk of contracting the virus, I'm not planning on getting a booster shot just yet.

"I can live with this low immunity [from the two shots of Sinovac] and will wait until there are enough vaccine supplies for all," he said. 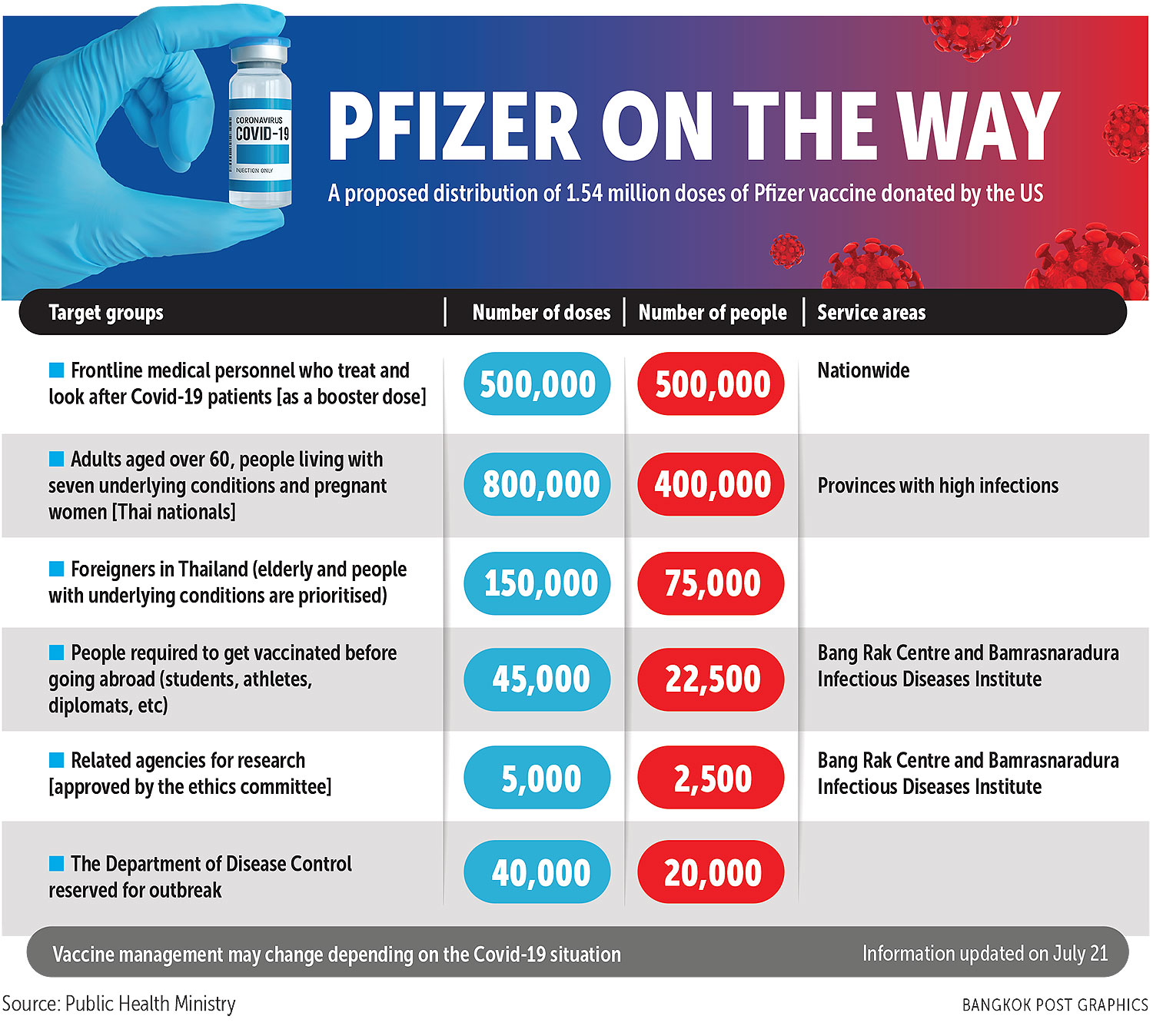 "But if the 300,000 missing doses [of the Pfizer vaccine] end up being given to VIPs and their relatives, I wouldn't be OK with that."

At a press conference on Sunday, Dr Rungrueng dismissed the claim as "fake news", before adding that no less than 500,000 doses have been earmarked as booster shots for frontline medics.

As the doses will arrive later this month, Dr Rungrueng said booster shots for frontline medical personnel will begin in early August.

"It is not true that some of the Pfizer vaccine are earmarked for VIPs. The vaccines are for health workers and at-risk groups. VIPs are not a priority," he said.

While the Pfizer shots won't arrive until later in the month, some healthcare workers have received a booster shot from AstraZeneca, Dr Rungrueng said, saying these individuals chose not to wait for the Pfizer vaccine to arrive on their own volition.

"Those who chose to get the AstraZeneca vaccine [as a booster shot] made the decision on their own, without anyone forcing them to," Dr Rungrueng said.

As for the other 20 million doses of Pfizer vaccines which have been ordered, Dr Rungrueng said they will be used in another vaccination programme that will cover more people in priority groups, which is scheduled to begin from October and run until December.

In another development, a group of academics and media are calling on the government to make all information about their vaccine import effort accessible to the public for the sake of transparency and accountability.

Details of all proposals, negotiations and contracts signed for the government's Covid-19 vaccine procurement should all be made public, the group said.

The call comes amid growing scepticism about the government's motives in jab allocations.

Detailed information about all plans to find sufficient Covid-19 vaccine supplies for the public, as well as criteria used to prioritise certain groups over others in the national vaccination campaign should also be published, said the group.