Curbs could last until end of this month

The Nonthaburi municipality is quiet before a curfew starts at 9pm on July 23, 2021. (Photo: Pornprom Satrabhaya)

The government has extended lockdown and curfew measures for two more weeks starting on Tuesday with 16 more provinces added to the list of "dark red or maximum and strict control zones", areas hardest hit by the Covid-19 pandemic.

Apisamai Srirangson, assistant spokeswoman for the Centre for Covid-19 Situation Administration (CCSA), on Sunday said the 9pm–4am curfew hours and other strict measures will be imposed in Bangkok and 28 other provinces for two weeks starting tomorrow.

The CCSA is expected to evaluate the pandemic situation again on Aug 18, and Dr Apisamai indicated another lockdown extension until the end of this month is on the cards.

"It is highly likely the [restrictions] will continue until Aug 31 if the situation does not improve," she said at a press briefing at Government House following a CCSA virtual meeting chaired by Prime Minister Prayut Chan-o-cha to review Covid-19 measures yesterday.

Existing restrictions in the dark red zones will remain in place, including curbs on inter-provincial travel, she said. People who wish to visit dark red zones must have a proper reason and will be screened upon entry, she said, noting a ban on gatherings of five people or more continues.

Shopping malls, department stores and community shopping centres are closed except for supermarkets, pharmacies and vaccination stations in their premises, Dr Apisamai said. No public transport services are available from 9pm–4am, she said, noting public transport in dark red zones is limited to 50% capacity. 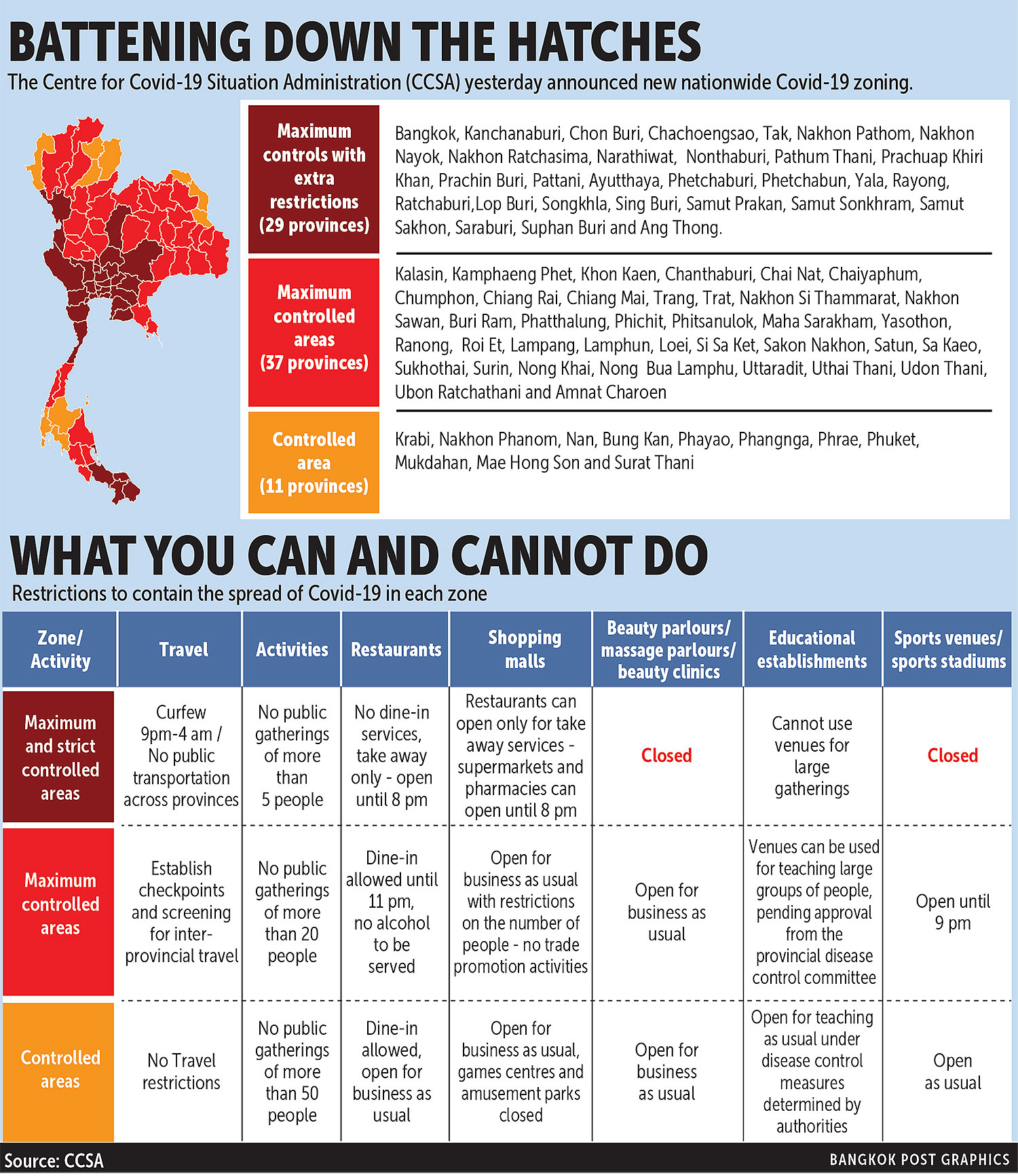 People in dark red zone provinces are still urged to work from home, Dr Apisamai said. People with medical reasons and businesses transporting essential goods are exempt from the travel curb, she said.

The curfew and lockdown measures have been enforced in Greater Bangkok -- Nonthaburi, Samut Prakan, Samut Sakhon, Pathum Thani and Nakhon Pathom, as well as the four southern border provinces of Pattani, Yala, Narathiwat and Songkhla since July 12.

Chon Buri, Chachoengsao and Ayutthaya were added to the list on July 20. The current measures will expire on Monday.

A source who attended the virtual CCSA meeting said Gen Prayut told the meeting that the government is set to import Sputnik V vaccine doses from Russia and it will ask its manufacturer to send the documents to Thailand.

The vaccine would be used to inoculate frontline health workers first, the source said.

Health experts agreed the high infection rates in Thailand are likely to continue over the next two months if nothing is done, the source said, adding Gen Prayut stressed the need for all agencies involved to communicate to the public to allay fears about the Delta variant.

Thaniwan Kulmongkol, president of the Thai Restaurant Association, welcomed the CCSA's decisions to allow restaurants at malls to sell food online. Operators are ready to adapt to the situation as they wait for relief measures from the government, she said.