A shipment of 1.5 million doses of Pfizer mRNA vaccines donated by the United States arrives at Suvarnabhumi airport on Friday morning. (US embassy photo)

The Public Health Ministry has started its Pfizer Covid-19 vaccine roll-out to medical personnel and frontline health workers in Bangkok, adjacent provinces, and other provinces nationwide as new record highs of 188 Covid-19 fatalities and 20,200 cases were reported on Wednesday.

Opas Karnkawinpong, director-general of the Department of Disease Control (DDC), said the DDC has begun distributing the vaccine doses donated by the United States.

The vaccines will be administered as boosters to medical personnel and frontline workers who have already received two shots.

Ramathibodi Hospital, Siriraj Hospital and Chulalongkorn Memorial Hospital in Bangkok will be responsible for the vaccine distribution while local hospitals in the surrounding provinces will handle the roll-out.

A total of 1,503,450 Pfizer doses donated by the US arrived at Suvarnabhumi airport last Friday. 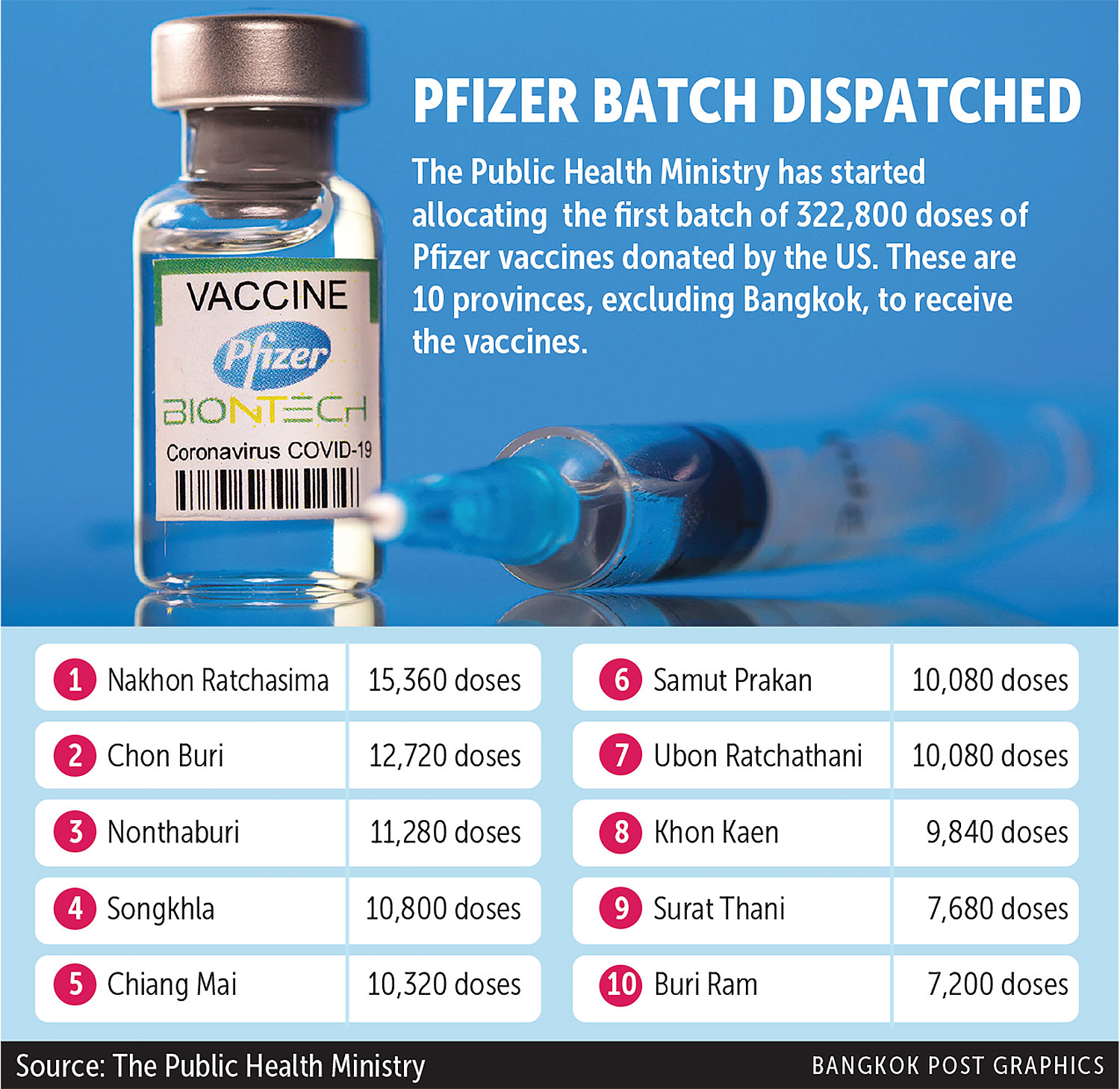 Dr Opas previously said that besides 700,000 doses set aside as boosters for the health workers, 645,000 doses will be allocated to the elderly and patients with seven underlying conditions, minors from 12 years old, and women who are 12 or more weeks pregnant.

Shortly after the shipment, social media was awash with a rumour that more than 30,000 doses of the vaccine had disappeared, with some "VIPs" getting the shots before everyone else.

This prompted Prime Minister Prayut Chan-o-cha to say during a cabinet meeting on Tuesday that he checked the figures with the US embassy and nothing was amiss.

Deputy permanent secretary for health Sura Wisetsak, who chairs a working panel on vaccine management, said on Wednesday the vaccines will be distributed to medical personnel who signed up to get the shots on a voluntary basis in Bangkok and its surrounding provinces first, and then to other provinces nationwide.

According to a leaked document outlining the vaccine roll-out to 322,800 frontline medical staff in provinces nationwide, excluding Bangkok, scheduled for Wednesday until tomorrow, Nakhon Ratchasima would receive the most doses (15,360), followed by Chon Buri ( 12,720 doses), and Nonthaburi (11,280 doses).

However, details regarding the number of doses allocated for Bangkok were not available.

The Bangkok Post later received confirmation from Dr Sura that the leaked document was genuine.

The document, which was shared on social media, was signed by Yongyos Thammawut, another deputy permanent secretary for public health.

Meanwhile, new record highs of 188 Covid-19 fatalities and 20,200 cases over the previous 24 hours were reported by the Public Health Ministry on Wednesday.

The previous one-day high for Covid-19 cases was 18,912 last Saturday, when the country also matched its earlier record high of fatalities at 178. There were 20,013 cases in the general population and 187 among prison inmates.

Meanwhile, a source at the Centre for Covid-19 Situation Administration (CCSA) said Gen Prayut, in his capacity as the CCSA director, had approved a relaxation of the rules, allowing restaurant operators and food chains to resume takeaway services, though shopping malls must arrange order and pick-up points properly.

On Sunday, the CCSA decided to ease restrictions for restaurants and eateries at malls, allowing them to sell food via delivery using online platforms. Restaurant operators remained unhappy with the decision, which the government has now revised.

MIAMI: The United States men's national football team, already without a permanent coach, was plunged further into turmoil on Thursday with both the federation's Sporting Director and the national team General Manager quitting their jobs.