A woman is administered with a Covid-19 vaccine shot in the Pfizer day at The Mall shopping centre in Ngamwongwan organised by Nonthaburi province. (Photo: Apichit Jinakul)

Covid-19 vaccine booster shots will be administered to about 3 million Thais who have already received their two shots starting from late next month, according to the Department of Disease Control (DDC).

DDC director-general Opas Karnkawinpong said the Public Health Ministry's subcommittee on Covid-19 vaccination agreed the booster shots will be given to Thais from late September until October.

"Which vaccine type will be used depends on the availability of the vaccine supply at that time and an estimated 3 million people who have already received two vaccine shots are expected to receive the booster shots," Dr Opas said.

A source at the ministry said AstraZeneca and Pfizer vaccines will initially serve as the booster shots because by that time there will be enough supplies from the two manufacturers.

Among the 3 million people to get the booster shots, many of them are likely to be those who already received two shots of Sinovac vaccine at least three months previously, the source said.

Permanent secretary for public health Kiattiphum Wongrajit said on Sunday the latest wave of Covid-19 infections shows some signs of slowing down.

As a result, the hospital bed occupancy rates in Bangkok and surrounding provinces have dropped, particularly among green-and-yellow coded patients with mild symptoms, he said.

According to the Busarakham field hospital in Nonthaburi, on Saturday there were 1,905 patients being treated there, a 54% reduction from the previous week which saw 3,526 patients, Dr Kiattiphum said.

As for transmissions in the provinces, infections were still detected in communities, markets, and camps for construction workers, he said, adding that health authorities were instructed to ramp up proactive mass testing using antigen test kits (ATKs). 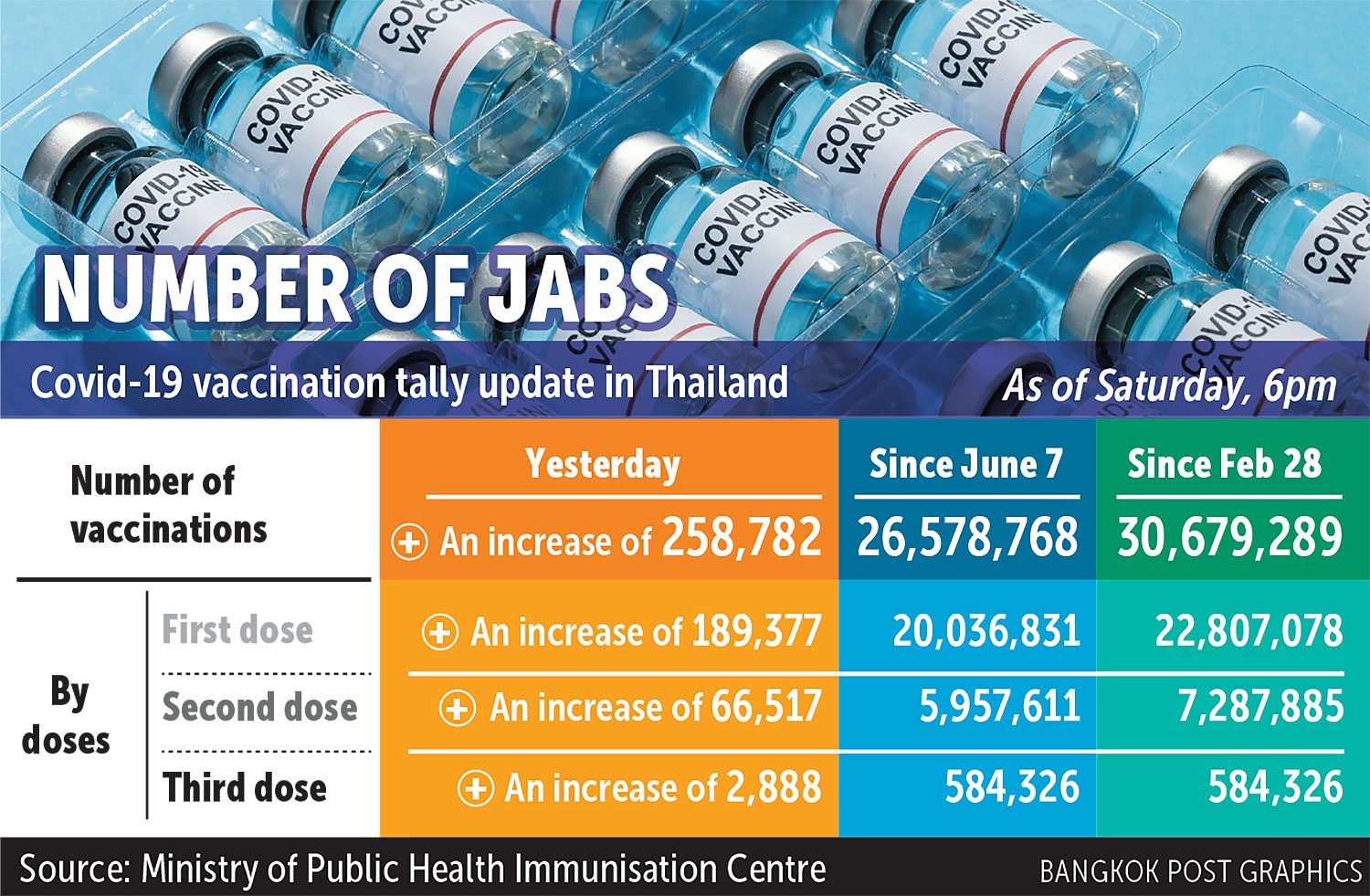 Those who test positive will be placed in home and community isolation systems to prevent the spread of the disease to other areas, Dr Kiattiphum said.

He said infections still spread among family members, causing deaths among vulnerable groups which had not been vaccinated.

He stressed the need to vaccinate people aged 60 and older, and those suffering from underlying illnesses that put them at risk, such as diabetes, obesity, chronic respiratory disease, heart and arterial disease, as well as women who have been pregnant for at least 12 weeks.

Government spokesman Thanakorn Wangboonkongchana said as many as 140 million Covid-19 vaccine doses are expected to be procured by the end of this year.

Prime Minister Prayut Chan-o-cha has instructed the Public Health Ministry to procure vaccines for children aged 12-18 to prepare them for the safe reopening of schools, Mr Thanakorn said, adding that more than 573,000 teachers have been vaccinated.

There were 16,298 cases in the general population and 328 among prison inmates.

With new cases slowing down, the CCSA on Friday announced the easing of Covid-19 restrictions on certain businesses in dark-red zone provinces, including restaurants, shopping malls, beauty salons, massage shops and parks, from Wednesday.

The changes include allowing restaurants to resume dine-in services, at 75% capacity in outdoor dining spaces and 50% in air-conditioned locations.

But all service staff must have two doses of vaccine and be tested with ATKs every 5-7 days. The guidelines also require customers to show proof of vaccination before they can enter restaurants to dine.

The curfew from 9pm-4am remains in effect for at least two weeks.