A woman reacts as a nurse administers a Covid-19 vaccine shot at Central Plaza in Lao Phrao on Sunday. (Photo: Arnun Chonmahatrakool)

The number of deaths in a 24-hour period was the lowest since July 26.

The Centre for Covid-19 Situation Administration (CCSA) said on Monday afternoon Greater Bangkok accounted for 52 fatalities, with the rest spread among 29 other provinces.

New cases fell for the third consecutive day on Sunday, although the new caseload was higher than the number of recoveries -- 11,125 -- and also higher than the 11,786 new cases recorded on Sept 14.

There were 11,851 new cases in the general population, 858 among prison inmates and 11 imported from abroad -- seven from Cambodia, two from the United States and one each from Israel and Myanmar. 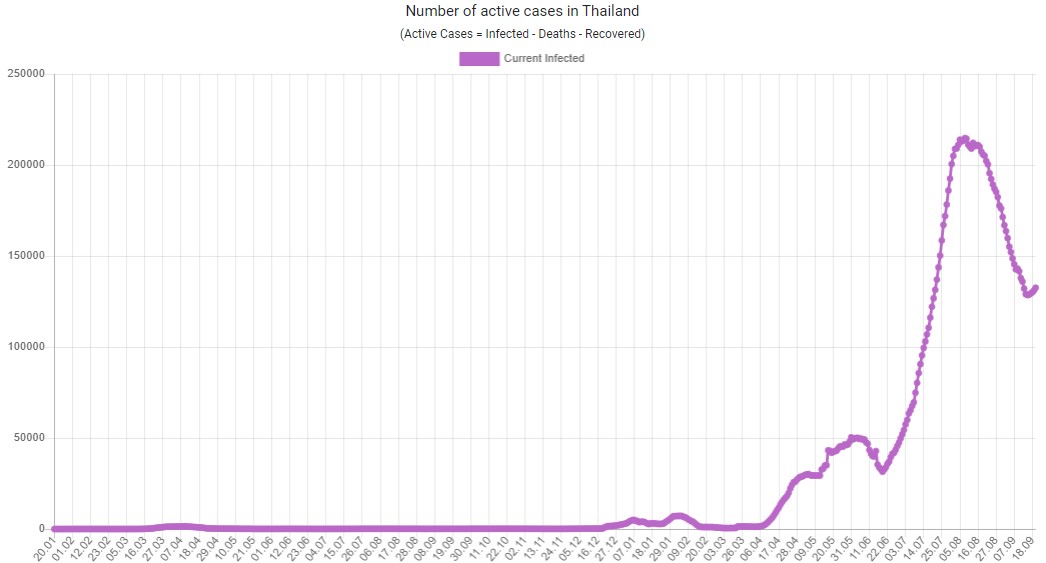 CCSA assistant spokesman Apisamai Srirungson said a significant decrease in new cases would be a condition for reopening the country, in addition to health measures to prepare for possible new surges.

Bangkok Metropolitan Administration Governor Aswin Kwanmuang has said 70% of the capital’s population should have received the second jab before inviting vaccinated foreign tourists to come.

At present, just 42% of Bangkok’s 7 million residents have been double-jabbed.

She said the BMA will hold talks with Phuket authorities on Wednesday to learn from the experiences of the island’s sandbox scheme. Fewer than 1% of the 32,000 fully inoculated tourists tested positive during their stay.

The death toll stood at 15,375 during the third wave and 15,469 since the beginning of the pandemic.

On Sunday 132,573 people received Covid-19 treatment at hospitals, including 3,592 seriously ill patients and 773 dependent on ventilators.