A medical staff member conducts a swab test for people living in Rangsit area at a sport stadium in Pathum Thani on Sunday. (Photo: Apichit Jinakul)

There were 9,568 cases in the general population and 362 among prison inmates.

On Sunday, 12,336 Covid-19 patients were discharged from hospitals after recovering from the coronavirus.

Although new cases in the country dropped below 10,000 again and deaths numbered fewer than 100, the Centre for Covid-19 Situation Administration (CCSA) on Monday afternoon reiterated concerns about the situation on southern provinces, including those in the far South.

While the capital led new infections with 1,137, Yala again came second with 764, a slight decrease from the 783 announced on Sunday.

In fact, five of the top 10 provinces with the  most new infections were in the southern region, including 484 in Songkhla, 406 in Pattani, 314 in Narathiwat and 313 in Nakhon Si Thammarat.

Southern provinces recorded 27 out of the 97 deaths between them, while Bangkok also registered 27 fatalities.

"Those infected in factories have started to take the virus to their families," she said.

Dr Apisamai said the Public Health Ministry would speed up vaccinations in the southern region, especially the four southernmost provinces where the rate remained low.

Only 33% of the population in Narathiwat had received the first jab compared with 35% in Pattani, 46% in Yala and 42% in Songkhla. Across the country, 45% have received at least the first injection.

The country imported seven cases from other countries, including five from Cambodia, one from Albania and one from Malaysia.

The death toll stood at 17,017 during the third wave and 17,111 since the beginning of the pandemic. 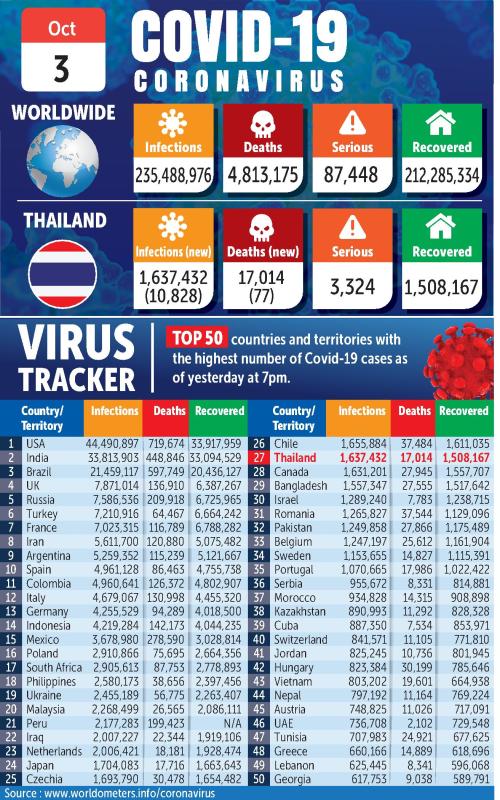